LOWELL, Mass. — Foxboro’s memorable postseason run came to an end in the Division 3 state semifinals, but not before putting a scare into top-seeded and undefeated Austin Prep.

After winning its first two playoff games in dramatic fashion on walk-off home runs, and belting out six triples in a 14-run explosion to upset Bishop Stang, the Warriors still had a little magic left in an upset bid against the Cougars.

After being no-hit for the first five innings by University of Virginia commit Evan Blanco, Foxboro feasted against Austin Prep’s bullpen. Trailing 6-0, freshman Mike Marcucella ignited the offense with a leadoff single through the right side. Senior Jack Watts followed with a double and junior Ryan LeClair earned a walk to load the bases with no outs.

Junior Sean O’Leary ripped a single to right to bring two runs in and that was enough for Austin Prep to put Blanco back on the mound. Since Blanco moved to left and stayed in the lineup, he was able to take the mound again.

After Blanco got one of his 13 strikeouts for the game, sophomore Tyler Prescott got Foxboro’s first hit off of Blanco with a single to center to score LeClair, and both O’Leary and Prescott moved up after the ball eluded the center fielder. A ground out from Liam Mulkern brought in another run to cut the deficit to 6-4, and just like that, Foxboro had the tying run at the plate.

Blanco induced a grounder for the final out of the sixth though, and then came back to strike out the side in the seventh to secure a spot in the D3 Final with a 6-4 win, ending Foxboro’s season at 16-8.

“You can never count our guys out,” said Foxboro head coach Derek Suess. “We got a few things going, Mikey Marcucella gets us going with a base hit after we were no-hit up to that point. All I could ask for is for them to battle each pitch, and for every opportunity we get and see what happens. They lit a little bit of a fire, had a little magic there…in the end, the better team won but I’ll take my guys any day of the week because they just fight their ass off, all seven innings for 21 outs, and you really can’t ask for more.”

Even with Blanco on the mound, the Warriors facing a two-run deficit, and just three outs left, Foxboro was full of optimism. The Warriors used back-to-back home runs from LeClair and O’Leary to stun Saugus in the opening round, and then Mulkern erased a one-run deficit in the second round with a walk-off two-run home run.

And to add to the momentum, O’Leary had just worked around a one-out single, and two base runners after an interference call, ending the inning with a terrific defensive play off the mound for the third out.

But there’s a reason the Cougars haven’t lost a game all year, and Blanc slammed the door shut to deny Foxboro another magical moment.

“I don’t think anyone thought this was going to happen this year,” Suess said. “In years past, we haven’t been a really strong team. These seniors, we have five of them [Kyle Smith, Jack Watts, Tom Marcucella, Drew Peterson, Liam Mulkern], they were our leaders and came through in the clutch when we needed them to and they set the tone for the rest of the team. For us to make a run, I’m so happy for those guys to be able to experience this because it doesn’t happen very often. I told them to soak in the whole experience while we’re here, win or lose, this is a great opportunity for our program. And these guys made a lot of people proud in the stands, at home, and in the community.

“I think they’ve proved it that we don’t just rely on one or two guys. It’s about one through nine, everyone in the lineup. When you get your opportunity, make the most of it. Everyone contributed this year and helped us win 16 games, I mean that’s quite impressive. It’s all the hard work they’ve put in, the camaraderie, and they’ve all bought in today and I couldn’t ask for more, I’m just so proud of them.”

O’Leary battled from the start and didn’t stop, tossing all six innings. He allowed six hits — only three in the final five innings — and walked four with six strikeouts.

Prep took the lead in the first, a one-out single from Zawatsky was followed by an RBI base hit from Will Burns and the Cougars had a quick 1-0 lead. AP had a two-out single too but O’Leary got a big strikeout to end the first.

The Cougars doubled their lead in the third without getting a hit. An infield error allowed a runner to reach and then he went to third after a throwing error on a stolen base. A ground out brought the run home to make it 2-0 after three innings.

Austin Prep created separation with four runs in the fourth inning, taking advantage of a leadoff walk and a triple from Brendan Walsh early for a 3-0 lead. After a strikeout for the second out, AP drew another walk and a wild pitch brought a run home. A two-out single from Zawatsky extended the lead to 6-0. O’Leary caught his second runner on the base paths for the third out.

“He didn’t want to [come out], he’s an absolute animal,” Suess said of O’Leary. “He wants the baseball, any opportunity there is. He wants to be up at the plate at the toughest times. I can’t ask for a better leader and for him to only be a junior and to be back next year is comforting. We could have taken him out and gone with someone else but he’s our best guy. They have an all-around good offense and he really pitched his ass off.” 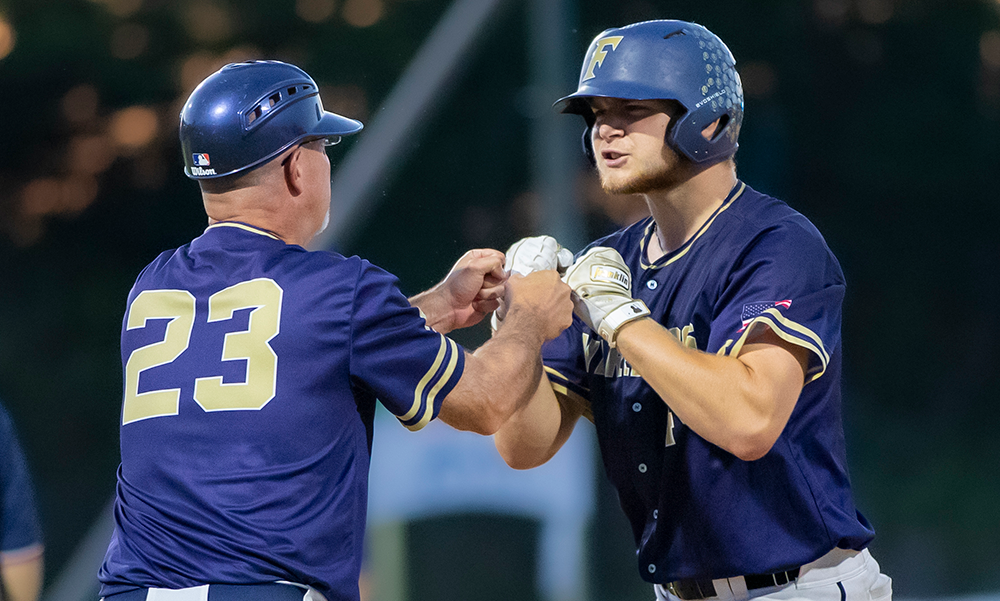