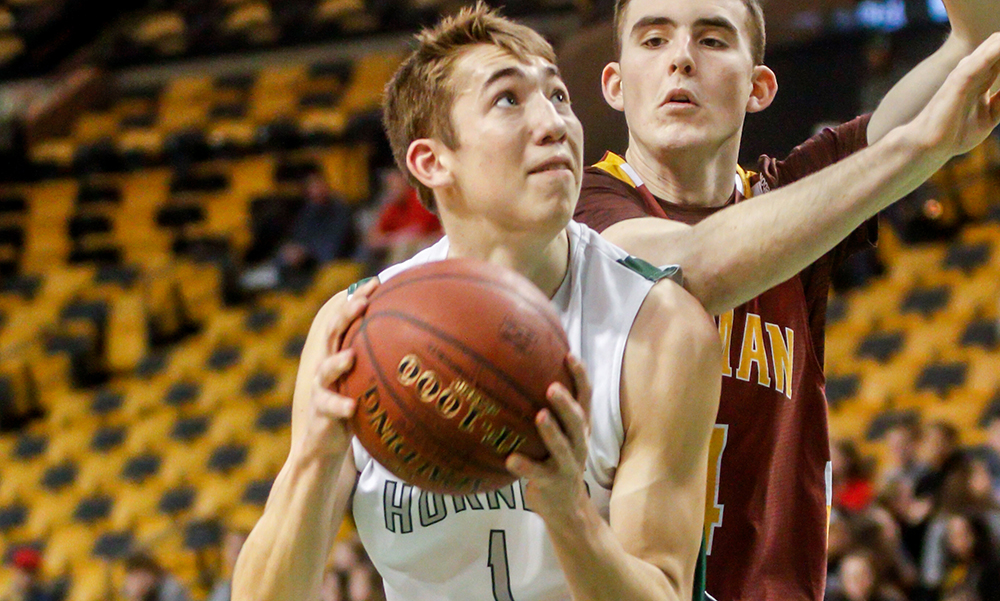 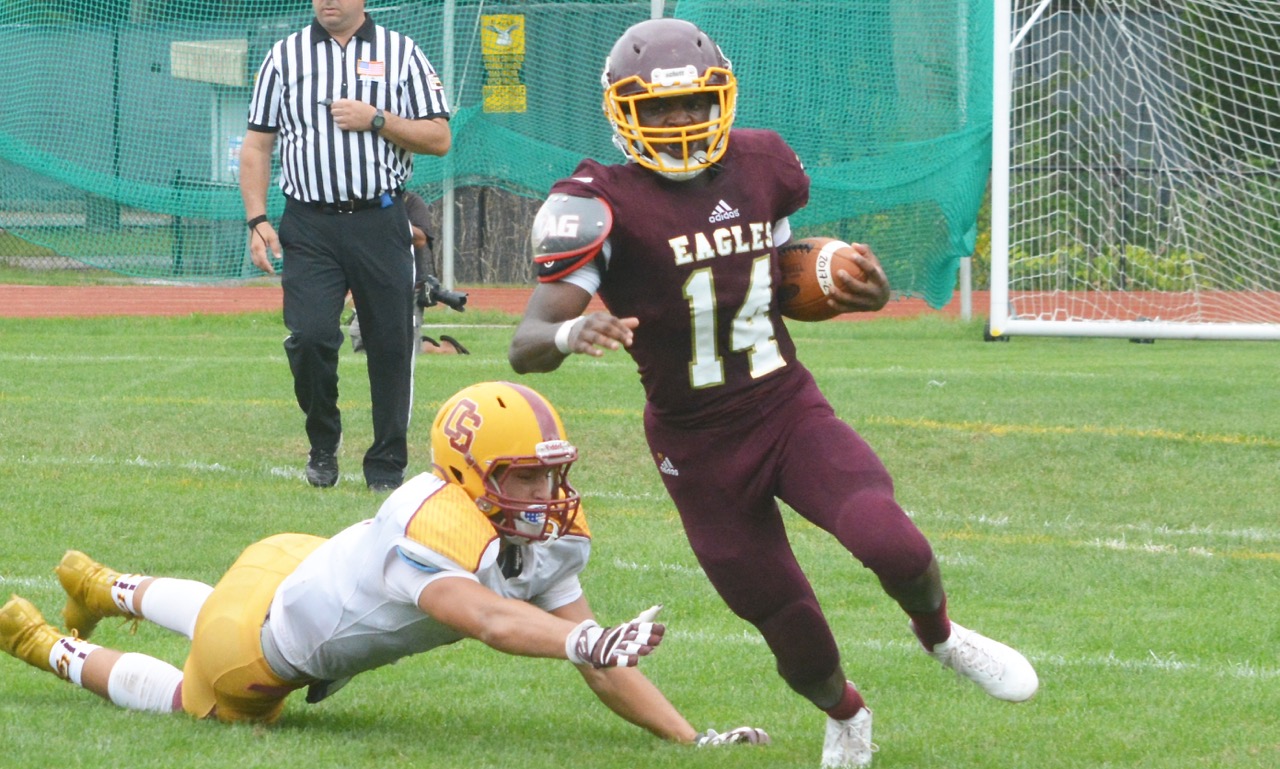 Click here for a photo gallery from Sharon vs. Cardinal Spellman football, 9-16-17.

SHARON, Mass. – The Sharon defense had held firm for more than 40 minutes without allowing a point, shutting down Cardinal Spellman twice inside the red zone, but as the fourth quarter wound down the Eagles were feeling the impact of the heat and humidity.


Spellman spread the ball around on offense, using four different running backs behind a sizable offensive line, and it started to pay dividends. The Cardinals were not trying to be tricky, just pounding the ball straight ahead and suddenly they were in the end zone with three minutes remaining. Only a minute later, they had the ball back again deep in Sharon territory and took advantage.

After 40 minutes without an offensive point, Spellman scored a pair of touchdowns in the final 3:21 of the game and stunned Sharon by pulling out a 21-14 victory on Saturday afternoon, denying the Eagles a perfect record heading into the start of Davenport division play next weekend.

“I thought we played well, we did a lot of good things,” said Sharon coach Dave Morse, “but it’s my fault not having these guys in shape and we wore down at the end. It’s something we’ve got to correct in the next week at practice and develop over the course of the season. It;s something we can control and we should have been in more control of that.”

It was the home team that struck first. Sharon faced third and 10 from its own 10 and junior Jeremy Ruskin (7-21, 240 yards) looked down the far sideline for sophomore Alec Filipkowski, who went up and pulled the pass away from the Spellman defensive back. He raced 67 yards before being pushed out at the Cardinals’ 23.

On the next play, Ruskin got his pass over the top of an outstretched defender and into Austin Dodes, who made a diving grab just across the goal line with fewer than 30 seconds remaining in the first quarter.

Spellman drove deep into Sharon territory on its next possession, getting as far as the Eagles’s 10, but Dodes broke up a pass play that would have set up first and goal and then Drew Naisuler (who also blocked a punt and was a constant menace on the edge) and Ahmed Sean stuffed the running back for a three-yard loss. On fourth down, Sean stopped a keeper for a short gain.

The momentum from the defensive stand only lasted six plays before the Cardinals tied the game. Ruskin’s second down pass was a little behind Naisuler, who got a hand to it but could not haul it in. The deflection fell to Spellman’s Jack Kingston and he returned the interception 40 yards for a touchdown.

The score stayed tied into the third quarter. Sharon’s first possession started at its own six-yard-line and Aaron Strong lost a yard on first down. Facing third and 11 from the five, Morse called for a middle screen and the Eagles executed it to perfection. Ruskin hit Chris Gong in a ton of space and the junior running back took off up the field, getting a couple of key blocks along the way, and scoring a 95-yard touchdown that shocked the Cardinals.

“It was definitely the best screen pass we’ve ran since I’ve been here,” said Morse. “We’ve got some kids and that’s an example of taking that step forward. We had linemen down field blocking, which is tough for those young linemen.”

Spellman put together a long drive early in the fourth quarter, once again reaching the Sharon red zone. Jaden Williams-Thomas and Jake Romanow stopped a run at the 18, setting up third and four. Naisuler stuffed a keeper for no gain and on fourth down, the Eagles stopped a pass play just short of the marker.

Unfortunately, the offense could only run a couple minutes off the clock before giving the ball right back. The defense looked winded as Spellman broke off runs of 15 and 11 yards straight up the gut and Jovan Marrero bounced a run off-tackle to the right and beat the Sharon defenders to the goal line to tie it 14-14.

Sharon went three-and-out on its next possession and the punt went only two yards, setting up the Cardinals at the Eagles’ 26. Marrero was again the primary back and five plays later he pushed the ball across from the one with just 38 seconds remaining.

Ruskin completed passes to Dodes and Filipkowski but then a spike and two incompletions ended the game.

“I told the guys we took two steps forward throughout the game but always took one step back,” said Morse, “and we are a young team and the quicker we can eliminate that step back than the better shape we’ll be in to move forward and get more wins.”