BROCKTON, Mass. – Throughout Franklin’s run in the 2018 MIAA Super 8 Tournament, every game has come down to the late innings.

That held true on Monday night, as Franklin scored the go-ahead run in the top of the ninth inning to beat Central Catholic, 3-2, and win the 2018 Super 8 title, the program’s first state title since 1986.

“This is the most resilient team I’ve ever seen”, said Franklin starter Bryan Woelfel. “Somebody punches us, we go down a couple of runs, it’s happened every game we’ve had, then people just step up in big spots and just get us right back to where we need to be.”

One of those spots came in the bottom of the eighth, as after a superb performance from Woelfel (7 IP, 7 H, 7 K), Jake Noviello entered the game in relief with runners on second and third, no outs, and the game tied up at 2-2.

Noviello struck out Sean Thompson looking and followed by punching out Mike Lefebvre. Joey Sanchez was hit by a pitch to load the bases, but Noviello bounced back and struck out Dante Pistone looking to strand the runners and give Franklin a chance to take the lead n the top of the ninth.

“I pitched against them the other day and got hit around one inning, so I knew to just come out and come after them,” Noviello said. “I just tried to give them my best stuff, and tried to gas them up.”

“There’s no other guy in the state that’s going to go into that situation and strike out three straight batters like Jake Noviello did, that’s unbelievable,” Woelfel said about his teammate.

Franklin (21-5) took advantage of the momentum a half inning late in the top of the ninth when Steve Luttazi led off with a single.

With Noviello at the dish, Central Catholic tried to backpick Luttazi, but the throw ended up in right field and Luttazi was able to advance to third. After a groundout, the stage was set for Evan Wendell.

Wendell laid down a perfect suicide squeeze bunt that allowed Luttazi to sprint home and score and give Franklin a 3-2 lead.

“Coach told me to bunt when I first got up there, he gave me the sign for the squeeze, and then they met at the mound and conferenced, so he called me over he said ‘you know what, they’re probably talking about this exact situation, so we’re gonna call it off for the first one,’ we did that,” Wendell said.

“They definitely thought it was a squeeze, he threw me a dirt ball, so then we did it the next pitch, and it worked. We practice that every day, so big kudos to coach right there, that was great coaching to call it off on the first pitch and then do it the second one.”

“He’s tough as nails, and I just had a feeling he was going to find a way, find a way for us, senior veteran, and I just wanted to give him an opportunity to knock it in a run, and to his credit, he executed the play to perfection,” said Franklin coach Zach Brown on Wendell.

In the bottom of the ninth, Noviello had to face the heart of the Central Catholic order, with Dominic Keegan, Steve Hajjar, and Mike Borrelli due up.

Keegan gave the Franklin faithful a scare with a bomb down the right field line, but it was a couple yards to the right of the foul pole. He ended up walking to lead off the inning, but Noviello got Hajjar to fly out to center and struck out Borrelli.

Mike Pierro hit a single into right to put the winning run on first, but Noviello struck out Noah Lucier to end the game and give Franklin their first baseball state championship in 32 years.

Franklin’s seniors were the ones came through in the late innings, with Woelfel, Noviello, Luttazi, and Wendell all playing huge parts in the win.

“It’s just a really special class, a really special group of kids, I love them, they know I love them, we talk about a lot more than just baseball,” Brown said about his seniors. “The thing I’m most happy with this group is now they’re going to be forever connected because of this state championship, and years from now when they see each other they’ll always have this moment together.”

Franklin’s offense got started in the top of the first when Colby Fitzgibbons singled on the first pitch of the game and was hit home when juniorJake Macchi homered to left field to give Franklin a 2-0 lead, a lead they held until the fourth inning.

Macchi almost had extra bases again in the top of the third, but a spectacular catch by Central Catholic left fielder Sean Thompson robbed Macchi of at least a double.

In the top of the fourth, Franklin loaded the bases, but Aidan Abernathy, who came on in relief of starter Noah Lucier after a Luttazi double, was able to get out of the jam.

In the bottom of the fourth, Pierro led off with a walk and came around to score on a double by Thompson. Thompson advanced to third on an error and scored on a groundout by Joey Sanchez to tie the game at 2-2.

With the win, Franklin baseball becomes the fourth team to win a baseball Super Eight title (Newton North, Braintree twice, St. John’s Shrewsbury). Franklin was also the last team selected for the tournament this year, and as the #7 seed, is the lowest seed to ever win the tournament. Franklin did not lose a game in its tournament run. 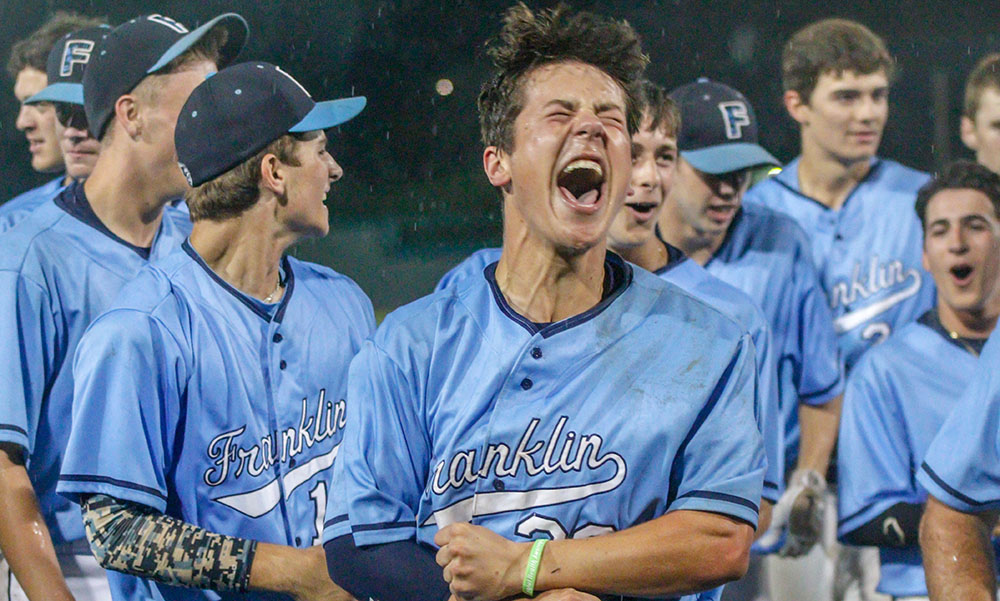