Unfortunately for Hornets, that inning was the top of the sixth against 13th-seeded Wellesley, as the Raiders scored all three of their runs and recorded a 3-2 decision over fourth-seeded Mansfield.

Wellesley had just two hits through the first five innings of play but plated three runs on their third hit of the game in the top of the sixth.

With Mansfield holding a 1-0 lead, Wellesley junior John Ciolfi led off with a walk and moved to second when Brendan Dolan reached after his sacrifice bunt was mishandled for an error. Sophomore Henry Weycker (Wellesley’s pitcher) launched a two-run double into right center field to put the Raiders ahead.

A ground out move Weycker to third and before Mansfield senior Nolan Dousa could deliver his next pitch on a 1-2 count, the infield umpire saw something no one else in the park did — a balk. That brought Wellesley’s third run in.

“All season long, our worst games, they have stemmed from one inning,” said Mansfield head coach Joe Breen. “Whether its the first inning, or giving up a couple late or just one single play. When you get to this level of baseball and playing teams like Wellesley, you don’t have room for many errors. We made a couple of errors, made a couple of mistakes and they took advantage of them. That was the difference in the ball game.

“That’s the difficult part of having a one-loss elimination style forms, you have to be at your best every single pitch, every single inning. And if you’re not, you don’t make it too far.”

Both teams put a pair of runners on in the first inning, but neither side could push across a run. Ciofli led off with a walk and went to second on a sacrifice bunt. Freshman Max Zajec drew a two-out walk to put runners on first and second but Dousa (CG, four hits, three talks, three strikeouts) got a fly ball to right field.

In the bottom half, senior Max Boen led off with a walk and classmate Matt Farragher (two hits) followed with an infield single. But Wellesley quickly picked up two outs with a pick off at second and then catching Farragher at second with a pick off move.

Dousa recorded a pair of strikeouts in the second in a 1-2-3 inning. Colin Gibbons led off with a single, moved to second on a sac bunt from Zack Peterson and took third on a groundout. However, Weycker induced a ground ball to shortstop Isaac Weycker and his throw just beat the runner at first.

“Dousa is the biggest gamer that I’ve ever coached,” Breen said. “I’m glad I had the opportunity to coach him and I’m glad that a lot of the younger pitchers in the program got to watch him come back this year from a pretty bad injury and work through all of it and come out and compete. Our team is very different with Nolan Dousa on the mound and our guys want to win almost a little bit more than normal when he’s out there because of how much effort he’s put in.

After another 1-2-3 inning from Dousa, the Hornets broke through for the first run of the game in the bottom of the third. Anthony DeGirolamo ripped a one-out line drive double and moved to third on a ground out. DeGirolamo then came home to score on a wild pitch, giving Mansfield a 1-0 lead.

Mansfield put another runner in scoring position in the bottom of the fifth inning as DeGirolamo walked and stole second, but Wellesley picked up the third out via a grounder to second.

After the Raiders took the lead in the top of the sixth, the Hornets were able to get one run back in the bottom of the inning. Gibbons reached on an error and pinch runner Connor Driscoll took third after an errant pickoff attempt. Peterson delivered with a hit up the middle to make it 3-2.

In the bottom of the seventh, Kevin Dow reached with one out on an error but Weycker got a strikeout looking and induced another grounder to second for the final out.

“It’s been a great senior group,” Breen said. “They’ve all played different roles and they all played them very, very well. This was a group that had a handful of guys that were around for our tournament run a couple years ago and saw what it was like to win. Last year, when they took on bigger roles for the first time, they were one game away from the tournament and they came back this year with a great senior year.”

FRANKLIN, Mass. – When the showdown between rivals Mansfield and Franklin was moved from Tuesday to Thursday because of rain, it meant to two things: the winner of the game would now clinch at least a share of the Kelley-Rex title and Franklin’s starting pitcher would be different.

Franklin ace Jake Noviello toed the rubber on Wednesday against Attleboro, meaning that the Panthers would go with their number two starter.

But luckily for the Panthers, their number two is also an ace.

Junior Jason Ulrickson (6-0) scattered five hits in 5.2 innings of work to earn the win and also delivered at the plate, going 2-for-4 with three RBI and a run scored, leading the Panthers to a 6-3 win over the Hornets under the lights on the campus of Franklin High School.

“I was pumped,” Ulrickson said when he realized he would be starting the game after the postponement. “I’m always looking for the opportunity to pitch in the big games. At the beginning, it was a little rocky but once I settled in I was feeling good.”

The win clinches at least a share of the Kelley-Rex title for Franklin, the program’s first league title since 2012.

“We have all the respect in the world for Mansfield, coach Breen and that team,” said Franklin head coach Zach Brown, who earned his first title in his fourth year at the helm. “We knew it would be a dog fight. They made it really tough on us.

“The thing we talk about all the time is that you have to earn it, you have to get 21 outs. They don’t come easy so I’m proud of our guys that when they had opportunities, they were able to make them.”

Franklin didn’t waste too much time to get its offense in gear, plating a pair of runs in the bottom of the first. Jake Lyons reached on an error to lead off, Ryan Hodgkins singled to move Lyons to third and Ulrickson lined singled up the right side to bring the first run in.

After a fielder’s choice, Tyler Gomes grounded a single through the hole to bring Ulrickson home.

“Getting on top early is huge, that gives the team a lot of energy,” Ulrickson said. “Once we get going, we can really start to hit.”

Mansfield was quick to respond, cutting the deficit in half in the next half inning. Cullin Anastasia singled and moved to second on a fielder’s choice. Kevin Dow took ball four, which turned into a passed ball, allowing Anastasia to take third. Anthony DeGirolamo hit a grounder that looked to be the third out, but the ball was dropped at first and Anastasia scored.

The Hornets then took the lead in the fourth inning, tacking on two more unearned runs against Ulrickson. Kyle Moran got things started with a two-out single and Dow followed up with another single to put runners on the corners — Connor Driscoll taking third as a pinch runner. DeGirolamo drove a shot to right field that required a tough play from the fielder and the ball fell out of the glove, allowing two runs to cross on the error.

“Our guys fight, we battle…we’ve been down in other games and came back with different results. Our guys won’t stop fighting I know that. But when you play a team as good as Franklin, a team coached as well as they are, you can’t make the mistakes we made.”

Franklin came back to regain the lead in the bottom of the fifth inning. Senior Josh Macchi led off with a single and Gomes launched a double to put runners on second and third. Sophomore Alex Haba delivered the big hit of the game, doubling to left center to bring in two runs to give Franklin a 4-3 lead.

“Alex has been really steady for us offensively all year,” Brown said. “Even though he’s a sophomore, he certainly has a veteran’s soul. That at-bat there really spoke to his presence in the batter’s box, his poise in the game.”

The Panthers’ offense kept rolling an inning later, plating two more insurance runs in the sixth. Lyons notched his second hit of the game to start the inning and took third on a perfectly hit and run play with Hodgkins knocking a single into right. Ulrickson padded the lead with a two-run double into right center to put Franklin up 6-3.

“I don’t think Jason had his best stuff today on the mound but he’s always a great competitor,” Brown said. “Whether it was on the hill or in the batters box when we needed him, he was big for us so I was proud of him.”

Franklin baseball improves to 12-3 overall in league play. The Panthers can win the title outright with either a win over King Philip on Monday or an Oliver Ames win over Mansfield on Tuesday.

“We have a ton of respect of all the teams in our league,” Brown said. “I really think that the Hockomock, top to bottom, every year is really tough and you have to grind it out. It’s really a testament to our guys and how consistent they’ve been this season.”

“It feels great, but we’re not done yet,” Ulrickson beamed.

Franklin baseball (13-4) is back in action on Friday with a trip to Framingham. Mansfield (13-5 overall, 11-4 Hockomock) hosts Oliver Ames on Tuesday. 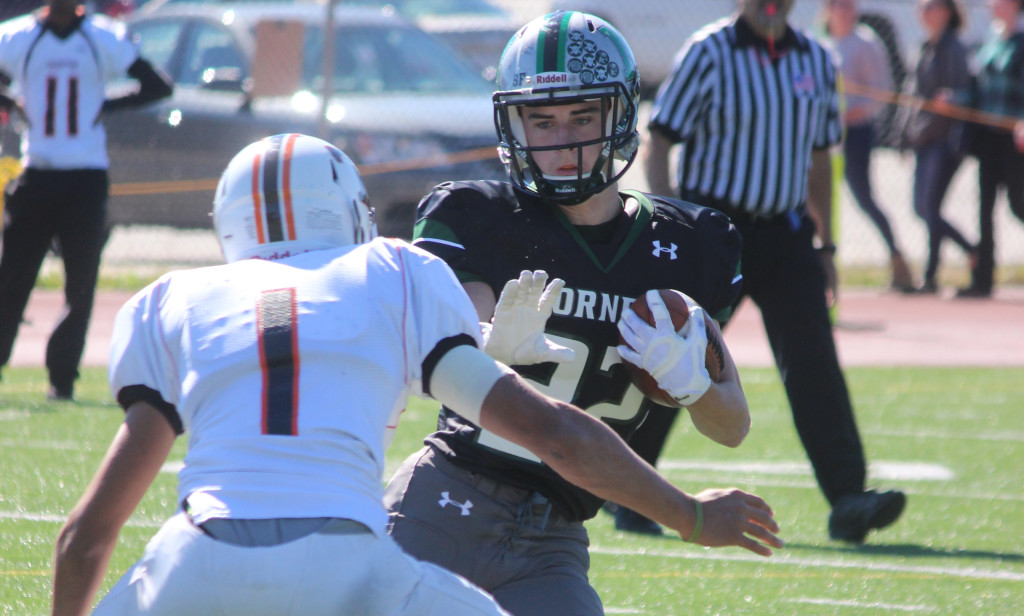