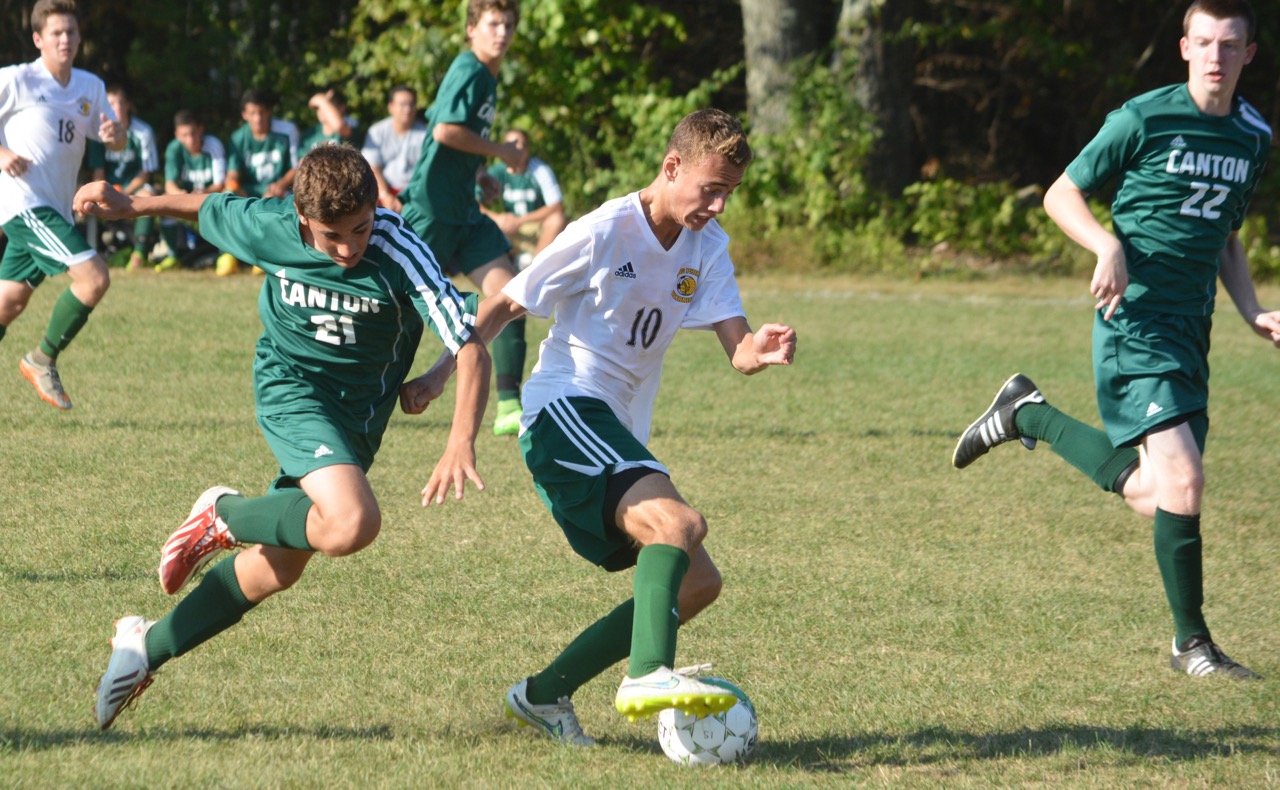 Click HERE for a photo gallery from this game.

NORFOLK, Mass. – Canton was starting to get back into the game, just a little. Bulldogs coach Danny Erickson talked to his team about needing to play with more energy and life in the second half and his team responded with more pressure on the ball, more aerial challenges, and more play in the King Philip half.

Unfortunately for Canton, the increased pressure did not lead to more scoring opportunities and in the 57th minute KP junior defender Cam Mullins stepped into a nearly 40-yard free kick that dipped and swerved and found the back of the net.

The goal effectively sealed the win for the Warriors, who ran out 2-0 victors over Canton on Wednesday afternoon at the Centennial Field at Freeman-Kennedy Elementary in Norfolk, where KP is playing while a turf field is built at the high school.

“We had a striking session yesterday and he was probably the best striker out of all of them,” said first-year KP coach Nick Gale. He joked, “I don’t know what’s worse we only score one goal in the exercise or our center back is the best striker on the team.

“It was good for him, a well-struck ball and he deserves it.”

The goal came about 10 minutes after KP nearly doubled its advantage. Sophomore striker Tyler Mann intercepted a pass out of the Canton defense and raced towards Bulldogs keeper Sean Mitchell but his low strike across goal hit the far post and skipped out.

Mullins stepped into his long free kick and made it 2-0 with still 23 minutes remaining in the game, but Erickson admitted that his team “would’ve needed something pretty good” to happen to try and get back into the game.

The lone chance for Canton in the second half came with fewer than 12 minutes remaining when freshman Griffin Roach’s corner was header over the bar by classmate Paul Corcoran.

KP jumped all over the visitors in the opening 30 minutes of the game, dominating possession and keeping the Bulldogs pinned back in the defensive third.

The Warriors had an early chance when left back Colby Koch stormed forward and sent in a low cross to Clayton Guess at the near post but he blazeed his shot over the bar. Shortly after, it was the other fullback that would set up the opening goal.

It came after a nice passing move in midfield with Will Weir keeping possession and passing back to fellow midfielder Larsen Keys, while right back Ryan Coulter bombed forward and received a pass over the top. Coulter reached the byline and cut a pass back to the penalty spot for Mann, who took a touch before finishing.

“They created a lot of mismatches for us and they’re very athletic with a lot of speed and that gives us a lot of advantage, especially on the wings,” said Gale of his fullbacks getting forward into the attack.

“That [goal’s] a perfect example of the mismatches we can create.”

As the half started to wind down, KP created another golden opportunity only to be denied by the keeper. Guess cut inside from the left and forced Mitchell into a solid diving save low to his right and the keeper was quick to his feet to deny Mann on the rebound as well.

Erickson called timeout at that point to rally the troops.

“We weren’t able to keep the ball,” said Erickson. “We came out very flat and they came out hopping with a bounce to their step. They played on the front foot in the first 30 minutes and we certainly didn’t.”

“We just chased around and didn’t look like we had much of a plan.”

The 10 minutes of the first half that followed the timeout was Canton’s best stretch of the match and also featured its lone chance of the first half. A cross to the back post eluded KP goalie Derek Vadnais and found Joe Basile whose header somehow hit the back of Vadnais as he was twisting in midair trying to find the ball.

It was a half-chance, but the best that the Bulldogs had all day as the combination of Mullins and senior Joe Kellett (moved to the back as cover for an injury) kept the Canton attackers at bay.

“That’s probably the top game that we’ve played thus far,” said Gale. “We moved the ball well, had a lot of energy, and definitely had an attacking mindset, which is what we struggled with against Milford last Friday.”

Canton (0-1-1) has a quick turnaround with a trip to Rockland on Thursday, while KP (2-1-0) has a showdown with division rival Mansfield on Friday.