FOXBORO, Mass. – Despite losing only two games all season and claiming the top seed in Div. 2 South for the second year in a row, Foxboro has been guilty of getting off to slow starts. In the playoffs, allowing a team to hang around is dangerous, as the Warriors were reminded in a hard-fought, two-point win against No. 16 seed Notre Dame Academy in the first round.

The warning was heeded by the Warriors, who came firing out of the gates in Saturday night’s quarterfinal against Dighton-Rehoboth. Foxboro (20-2) jumped out to a 21-2 lead in the first quarter and never looked back, rolling to a 66-35 victory to reach its third straight sectional semifinal.

“I was very unhappy with the way the last game started and they were equally so,” said Foxboro coach Lisa Downs. “I think they were pretty determined not to have it be that way. They were definitely determined mentally to be more prepared.”

She added, “You do have to remind them that there is no other day, if you don’t leave it on the court. They definitely walked away from that game (against NDA) feeling pretty bad about themselves because they knew they could’ve done better. Hopefully, they don’t ever want to feel that way again.”

Although she knocked down five three-pointers in the first round against NDA, sophomore Katelyn Mollica didn’t have a great shooting night overall. That was not a problem on Saturday. She drilled three from beyond the arc in the first quarter and knocked down a jumper off a feed by Lizzy Davis. Chelsea Gibbons also came out on fire, hitting a pair of threes of her own and scoring all 10 of her points in the first.

The Falcons barely had time to register what was happening before the Warriors finished a 19-0 run that put the hosts ahead 21-2. D-R cut into the lead a little before the end of the quarter but Foxboro was in complete control up 16.

“Chelsea and Mollica just started out so strong,” Downs said. “Their shooting percentage was ridiculously good and you knew we couldn’t sustain that. You knew the second quarter it would go down a little bit, but as long as the defense stays the same we’d be in good shape.”

It was unlikely that the Warriors would be able to continue the hot shooting start, but their pressure defense made it difficult for D-R to get a run started and Foxboro’s ability to crash the boards kept giving them second and third chances. Abby Hassman and Yara Fawaz each finished with nine rebounds apiece and combined for 10 in the first half alone. Shakirah Ketant added seven boards off the bench.

Downs said, “As good as we were last year, the inside presence that we have this year is something we didn’t have. Hopefully, that will continue because we’re going to need it. Our inside game, you have to pay attention to it.”

Foxboro led 33-17 at halftime and came out of the break looking to put the game away. Davis (14 points) drilled one of her four three-pointers to get things started and assisted on a Hassman bucket. Mollica then scored the next five, drilling a three and hitting a floater at the shot clock buzzer.

Fawaz (seven points) had a steal and a layup and Ketant turned an offensive rebound into another basket. Foxboro then got four looks at the basket and finally Ketant smartly tipped a rebound to an open Mollica, who buried the baseline jumper. The Warriors led 49-26 after three.

There was no way back for the Falcons in the fourth, as Mollica scored five more, including her fifth triple of the night, and Davis added eight points, including two more from beyond the arc.

It was a dominating victory for the two-time defending South champions and sends them to the sectional semifinal on Wednesday night at Bridgewater-Raynham. The Warriors will face the winner of Pembroke and Norwood, which was moved to Sunday afternoon. 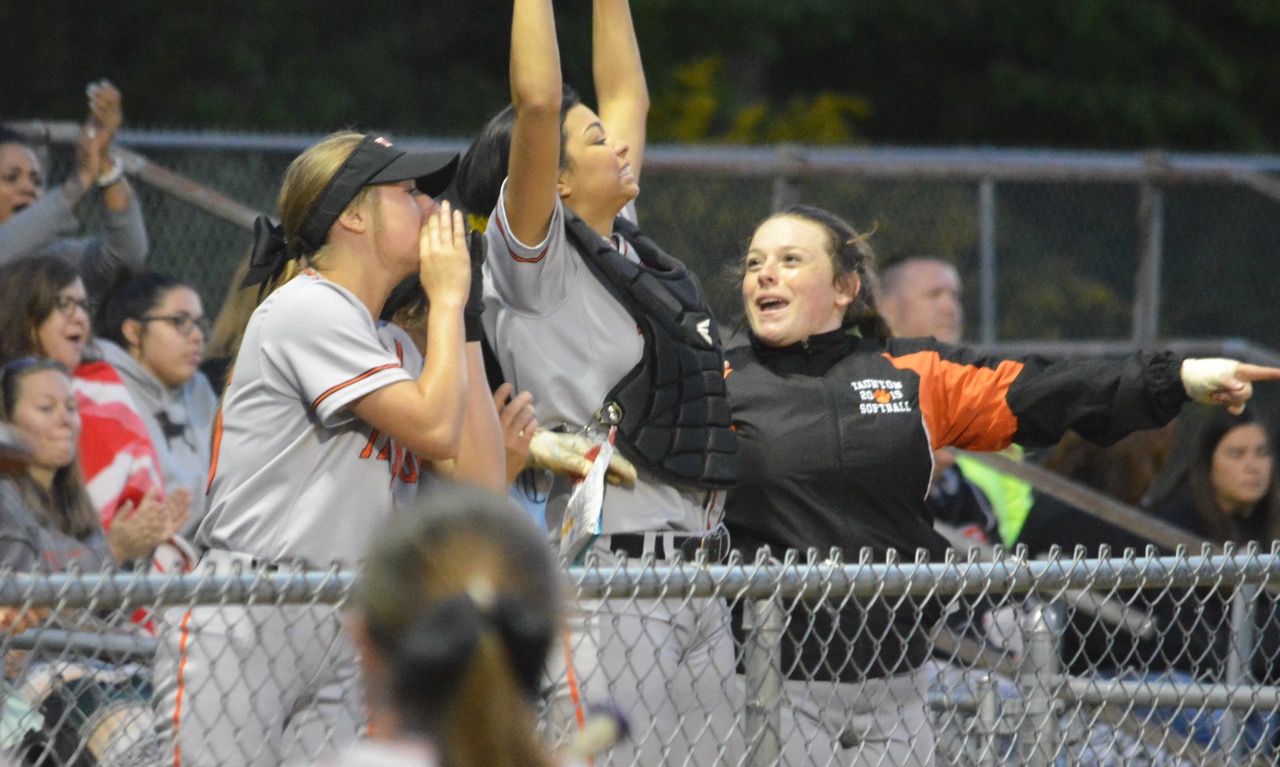 Click here for a Photo Gallery from Taunton vs. Dighton-Rehoboth softball at Jack Tripp Field, 5-24-18. 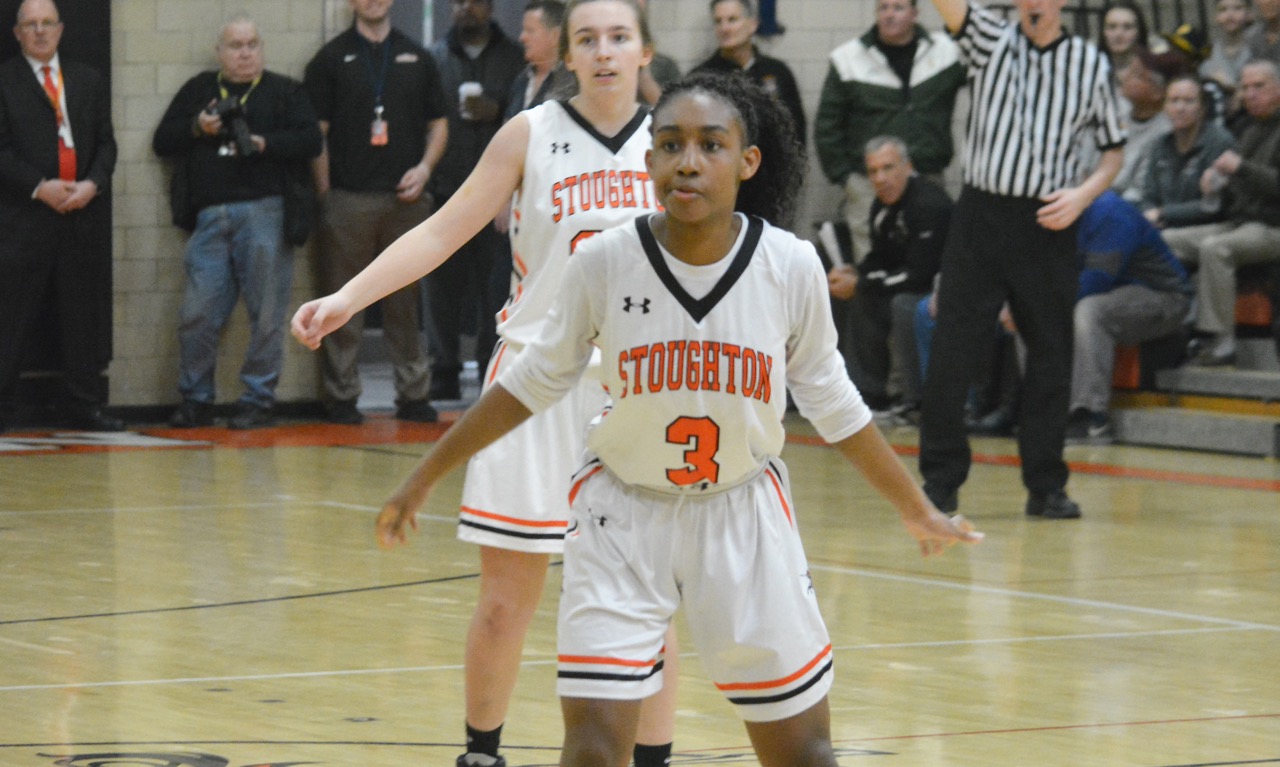 Click here for a photo gallery from Stoughton vs. Dighton-Rehoboth girls basketball at Stoughton High in Div. 2 South, 2-27-18.

STOUGHTON, Mass. – Although Stoughton entered the playoffs on a roll, having won 11-of-12 games since a 1-7 start to the season, the Black Knights are a young and relatively inexperienced crew and there is a different feel to postseason play.


In front of a packed house and a vocal home support, Stoughton came out of the gates a little rushed and struggled to pull away from ninth seed Dighton-Rehoboth, leading by just five at the break. After halftime, the Black Knights looked like the team that rolled through the end of the season.

Stoughton held D-R to just six points in the third quarter and used a 16-0 run to break the game wide open and push the lead to as many as 22 points in a 52-35 win that advances the Black Knights to the Div. 2 South quarterfinal.

“Once they took a deep breath, I said listen, this half is ours,” said Stoughton coach Charmaine Steele Jordan. “I said, if you go out and defend the way I know you can defend, we’re turning the momentum in our favor and they rose to the occasion. We got deflections that gave us transition baskets, which gave us the confidence, and they just kept pushing.”

The Black Knights got off to an inconsistent start, jumping out to a 7-2 behind a pair of jumpers from Lindsay McDonald (eight points and six rebounds), but struggling to take care of the ball and allowing D-R to tie the game despite only making one shot from the floor in the first quarter.

Sophomore Mariah Harris came off the bench and scored in transition from an Aliyah Wright assist and then again scored on the break, this time following a Val Whalen steal and long outlet pass.

“She is a spark and she can get deflections,” said Steele Jordan. “She does a good job reading the quarterback’s eyes and getting in the passing lanes. She’s a tough kid. I get on her, I push her, and the expectation for this program is that if you want to play then you need to show you’re going to bring it on the defensive end and she did that for us.”

The Falcons got off to a quick start to the second quarter with an 8-2 run giving the visitors a 15-13 lead. Freshman Sydnee Hyacinthe tied the game off a steal and pull-up jumper and Wright (10 points, eight rebounds, four steals, and four assists) gave the Black Knights back the lead with a transition basket. Hyacinthe drilled a three and then Harris got back-to-back steals and layups for four points in less than 10 seconds and a seven-point edge.

Steele Jordan said, “I knew there was going to be a lot of jitters, but I was confident that they could get it done. I knew we could win, we just needed to settle and get into a groove. We executed on offense and that’s key at this point in the season, you’ve got to execute.”

At halftime, the Black Knights settled down and it showed with a dominant third quarter.

“We went down to the locker and I just told everyone, we’re doing okay right now but we can do better definitely and we just need to slow down on offense,” Whalen said about the message to her teammates during the break. The message was well-received.

McDonald knocked down a jumper and senior Jordan Motley, who sat much of the first half with foul trouble, scored to push the lead to double digits. A three-point play and a three-pointer from the visitors, sandwiched around a pair of Whalen (eight points and 15 rebounds) free throws, cut the lead back down to six, but then Stoughton broke the game wide open.

Motley scored with a spinning layup off a Hyacinthe assist and then the freshman guard knocked down her second three of the game. McDonald capped the quarter with another jumper for a 13-point advantage.

The run continued in the fourth, as Wright scored plus a foul and followed it with an offensive rebound and put-back. Whalen added a three-point play and Hyacinthe pushed the lead to 22 points, 47-25, with a steal and layup and effectively put the game out of reach with half of the fourth quarter remaining.

“Coach always says it starts on defense and then it will happen on offense, shots will fall,” said Whalen. “If we have a good defensive half and then the next half will be offense.”

Steele Jordan added, “Your first playoff game is always the most challenging because you’ve just got to get over the nerves and we’re young…so for us, they just needed to take it all in. All of the atmosphere was an adjustment for my team and it was great to get that first ‘W’ at home.”

Stoughton (13-8) will now likely face a third meeting with Davenport division champion and top seed Foxboro, which won both meetings by double digits in the regular season. While the Warriors will be the favorites in the quarterfinal, Whalen for one is looking forward to getting a third crack and the league champion.

“We’ve just got to keep a positive attitude at all times,” she said. “My sister’s team beat Foxboro both times in the regular season [in 2014] and then they beat them in the playoffs, so I’m just expecting to go out there and have fun because it might be one of my last games playing.”