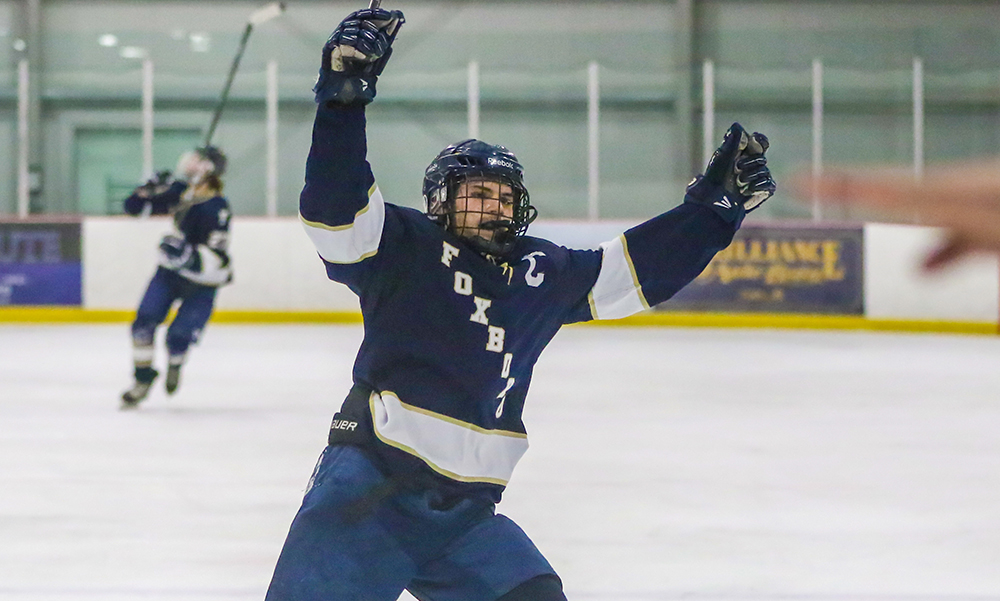 CANTON, Mass. – Scoring against Foxboro is challenging enough with senior goalie Espen Reager between the pipes.

The Lions, entering Sunday afternoon’s contest averaging over five goals a game and fresh off a dominating win over Greater New Bedford that featured 11 goals, were limited to very few goal-scoring opportunities throughout the 45 minutes of the D3 South Quarterfinal matchup with the Warriors.

That was because of the pairing of McGinnis and Pothier made sure to keep every John Paul II attack to the outside. And Eoin Reager and Coviello were quick to clear the path to the goal, if any shot did get through, Espen Reager had no problem seeing it.

The result was a 3-0 upset for the Warriors, scoring once late in the first period and tacking on two more in the final minutes of the third period. With the win, Foxboro advances to the sectional semifinals for the first time in program history.

“It means a lot for the program, it’s huge for our confidence,” said Foxboro head coach Mark Cedorchuk. “It’s the first time we’ve reached this far in the tournament so we’re looking forward to the opportunity to challenge whoever we play next.

“We didn’t give [John Paul II] much. They were dumping and chasing for the most part, and the shots they had, they were from the outside and Espen is going to stop those 99.9% of the time unless it gets deflected. They didn’t have a lot of opportunities in the scoring zones, maybe a couple of scrambles, but we really kept them to the outside.”

Perhaps nothing summed the game up better than a three-minute span in the third period. With Foxboro holding a 1-0 lead and less than half of the period left, the Lions broke out of their own zone and into the offensive zone.

But only a few strides in, Eoin Reager stepped up and swept the puck free to the boards and went on to finish his check, and the Lions’ possession came up empty.

A minute later, as John Paul II tried to enter the zone again the Warriors’ backcheck broke the play up as sophomore Matt Grace hustled to get back into the play and broke the play up from behind. Once again, the Lions were without a shot at a crucial point in the game.

“They’re keeping a lot of shots to the outside which is making it a lot easier for me to put rebounds into the corner and only face one shot,” said Espen Reager. “The defense is really helping out right now and I’m really liking it. For the most part I was able to see everything, being able to see the puck obviously helps when you’re trying to stop it. The defense was clearing everyone out in front.”

The defensive work paid off as junior forward Kirk Leach used his speed to race into the offensive zone a minute later, getting past a defenseman before lifting a shot on net. JPII goalie Gunnar Stevens got enough of the puck to stop it from going in but the puck sat on the goal line and Foxboro sophomore Jack Watts crashed the net and buried it for a 2-0 lead with 4:53 to play.

“And on top of the defense, the thing we’ve been working on is our backcheck,” Cedorchuk said. “We don’t want to get caught with three guys down low. We had a certain forecheck going to make sure that wasn’t going to happen. We were backchecking the middle of the ice, staying with them. I’m happy with how the guys played, they played hard. All the guys that were in there really contributed for us.”

The Lions only managed one scrum in front that resulted in a shot that went wide, and one final shot from the neutral zone that Reager easily gloved down, after going down 2-0.

Foxboro senior Ronnie MacLellan lifted the puck out of the defensive zone, Leach carried into the attacking zone and laid it off to Watts for the empty net goal with 32 seconds left.

“Our schedule definitely helped prepare us for this,” Espen Reager said. “And we can look and compare the schedule and see who they’ve played. We’ve played some really good competition and we’ve shown we can stay in games with top teams. And that’s been a great confidence booster for us in the tournament.”

The Warriors wasted little time applying pressure on the 17-win Lions. Just a couple minutes in, Stevens was forced to make a big save when Foxboro sophomore Ben Ricketts found junior Ryan Jacobs right in front for a one-timer.

Minutes later, Leach set up MacLellan and his blast beat Stevens but was denied by the inside of the post, the rebound falling right underneath the goalie.

John Paul II went on the power play on a too many men call on the Warriors but only managed one clean look, turned aside by Reager. Sebastian Ricketts won a battle and got a big clearance to help kill the penalty.

Foxboro’s first line of Leach, Watts, and MacLellan had a pair of bids go begging but the Warriors’ second line came up clutch in the final minutes.

Sophomore Matt Grace won a battle in the neutral zone and carried the puck over the blue line. With an open look at goal, Grace ripped a wrist shot that beat Stevens to give Foxboro a 1-0 lead with 1:05 left in the first period.

“It’s huge, it gives us a big lift,” Cedorchuk said of getting scoring from beyond the first line. “Getting that first goal from our second line, from Matt Grace, it just gives us a lot of confidence. And from there, it’s just a matter of time until our powerhouse line gives us something too. We had some really good chances, hit a couple of posts too. We’re happy with how we’re creating offense, we just have to tighten some things up.

“We felt like we were wearing them down, putting pressure on their defense with multiple lines.”

Reager’s biggest test of the second period came five minutes in on a wrist shot from the circle but the goalie reacted well to deny the bid. He came up with another strong save after PJII’s two-on-one failed, instead a strong shot from the blue line through traffic was gobbled up.