STOUGHTON, Mass. – In a game in which the largest lead either side had was four through the first three quarters, it was only a matter of time before one side rattled off a game-changing run.

That run came from the King Philip Warriors, who went on a 10-0 spurt that took less than two minutes in the final quarter to pick up a 62-51 win over Stoughton.

The teams were tied at the end of the first quarter (15-15), separated by just two at halftime (29-27 Stoughton) and again knotted through 24 minutes of play (42-42). The largest lead at that point was when the Black Knights led 25-21 late in the first half.

Stoughton scored on its first two possessions of the fourth quarter on baskets from Cam Gomes (12 points) but wouldn’t add another field goal the rest of the way. Nolan Bradley started the run, taking a pass from Pharoah Davis to tie the game at 46 with 5:44 to play.

Seth Sullivan (14 points) took in a defensive rebound and went coast-to-coast for a layup on back to back possessions to give the Warriors a 50-46 lead. Sophomore Kyle Layman (21 points, six rebounds, three blocks) hit a jumper and then found Sullivan on a cut up the middle for a layup to cap the 10-0 run with four minutes to play.

A free throw from Stoughton’s Cam Andrews (17 points, seven rebounds, three assists) followed by two more from Craig Goodrich brought the Black Knights within five (54-49) with 3:08 to play but Justin Vine answered on the other end for KP. After a stop defensively, KP missed on the other end but Will Weir grabbed the rebound and Sullivan converted two free throws with just under two minutes to play to make it 58-49.

“The wins are huge at this point in the season,” said KP head coach Mark Champagne said. “We have to win 11 [to qualify for the tournament] because we have the 21 games. It’s a really good win and we really needed the win too.”

“I think [the run] was all driven by their defense,” said Stoughton head coach John Gallivan. “They just stepped it up a notch and took it to a level that we didn’t have an answer for. A six point lead seemed like 26 when it’s been that kind of game. They stepped it up and we stepped it back, and that’s what happens.”

“We had a lot of adversity int he first half with Seth out, [Tom] Madden sick – I thought he sucked it up and played well – and Noah Goodwin isn’t even here, he’s got the bug. Every team is going to go through the flu,” Champagne said. “That was a good, gritty win. We were tied after three, down two at halftime. We came out and did a good job against their pressure. I thought we scored off of it a lot. Down the stretch, it was a little scary with some of the decisions we made playing against the clock but they had to foul just to get the bonus so that wasted more time.”

Both Layman and Andrews had strong starts for their respective sides. Layman was 4/7 from the field to net nine points in the opening quarter while Andrews was 3/5 (2/2 FT) to lead the Black Knights with nine points as the teams were tied 15-15.

Both sides got help from the bench in the second quarter. While Adrian Castillo and Bradley provided a spark for KP, Stoughton got four points from Izon Swain-Price and two points apiece from Justin Ly, Luis Monteiro and Matt Gallagher to take a 29-27 advantage into the break.

Although King Philip won the game, the Warriors were held without a three point field goal (0/10).

“Seth wasn’t in the game as much, [Justin] Vine stepped in on one he made – Justin did a good job down the stretch and Pharoah was in foul trouble in the first,” offered Champagne. “I thought Adrian Castillo and Nolan Bradley did a great job off the bench. Bradley only had seven points but they were big points.”

The win marked the second time Layman, just a sophomore, went over the 20-point mark this season. He scored a career-high 24 points earlier this month in a win over Taunton.

“It’s becoming more consistent, and as it should be,” Champagne said. “Just like Cam Andrews is for them, he’s a very good player. I think it’s a matter of confidence for a sophomore. Sophomore year is an interesting year but he’s done a great job for us.”

King Philip (4-8 overall, 3-6 Hockomock) will look to make it two in a row when they welcome Sharon to Wrentham on Friday night. Stoughton (3-8, 2-7) tries to bounce back the same night with a trip to Franklin. 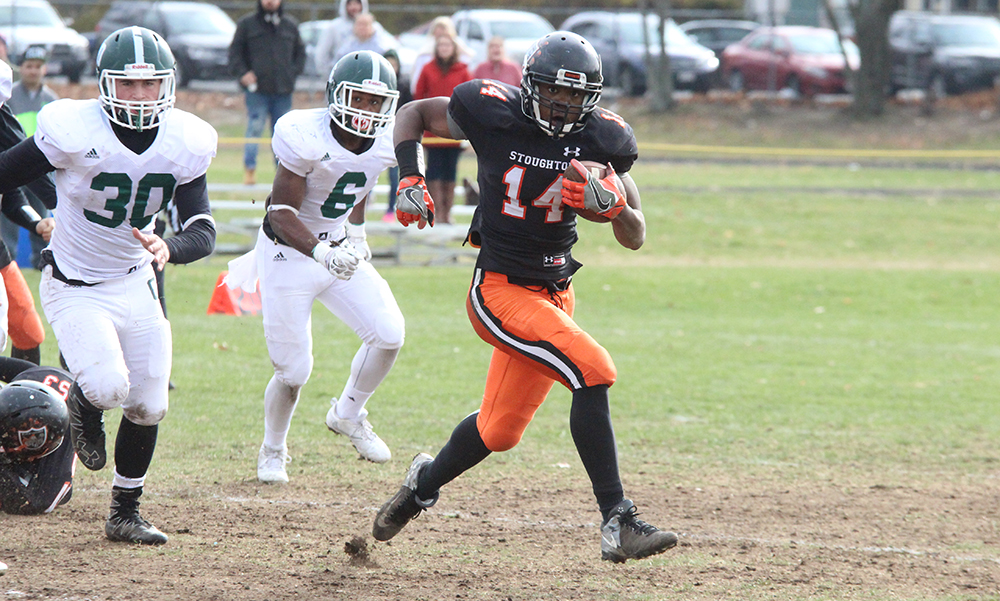 STOUGHTON, Mass. – There have been a lot of football games played on Anthony L. Sarno Jr. Field on the campus of Stoughton High School since 1953.

In the over-30 years played on Sarno Field on Thanksgiving, there has been plenty of history made, including the first overtime game in Thanksgiving history in 2012.

The Black Knights were able to make a little more history on Thursday in the final game ever played on Sarno Field.

Stoughton scored the most points it ever has on Thanksgiving with a 48-0 win over Canton in the 91st meeting between the two rivals on the holiday. Stoughton now holds a 47-40-1 lead on Thanksgiving.

The win also marked the largest margin of victory by the Black Knights. It tied the series high (Canton also won 48-0 in 1986).

“It was a nice way to end on this field,” said Stoughton head coach Greg Burke, who has called Sarno Field home ever since he took over in 1990. “The kids played tough, they were great all year. I wish we were still playing, I think we’re good enough to have one more game. But but we played our butts off today.

“We had a great senior group this year. Hats off to Canton, they have a lot of kids back so it will be a war next year. I’m happy with got eight wins this year and with our schedule, that’s pretty damn good, I’m proud of that.”

Stoughton seniors Izon Swain-Price and Ryan Sullivan both rushed for over 100 yards and combined for five touchdowns to lead the way for the Black Knights. The hosts scored on six of their eight offensive series and added one special teams touchdown as well.

“This is the last game on this field so all week Coach Burke has been preaching that he wanted this to be the best game ever played on this field and I think we succeeded in doing that today,” Sullivan said.

Stoughton’s defense forced and three and out on Canton’s opening series and two plays into its first possession, junior Justin Ly found a big gap and raced for a 44 yard touchdown.

The Black Knights forced another three and out and again, cashed in two plays later with Swain-Price (3 carries, 108 yards, 3 touchdowns) going up the left side for a 36 yard touchdown and an early 13-0 lead.

Swain-Price scored again on his second carry of the game, going up the left side for a 21 yard touchdown that capped a 7-play, 70 yard drive for Stoughton — its longest of the game.

The second quarter was more of the same for the Black Knights. On the second play of Stoughton’s fourth offensive possession, Swain-Price took his third carry for 51 yards, toeing the sideline for the last 15 yards, to find the endzone to put the Black Knights up 27-0.

After Stoughton’s defense came up with another stop, Sullivan (4 carries, 107 yards, 2 total touchdowns) returned a punt 73 yards with just over two minutes to play in the first half to give the hosts a 34-0 lead at the break.

On the first play of the second half, Sullivan raced 59 yards for a touchdown to make it 41-0.

“Ryan and Izon, there as good as anyone in the entire state, there’s no doubt about it,” Burke said. “Sullivan and Swain-Price they will match up against every single player in the state. When you get them going, they’re going to cause some trouble. Then it goes back to the line, we had a great line, tough kids. They slugged it out this year…we slugged it out against everyone this year.”

Stoughton finished with a 327-107 advantage in yards.

“It was a complete game all the way,” Burke said. “I’m not sure how many yards we had but I know they couldn’t have gotten a lot. When they’re punting a lot and we’re kicking off a lot, I know we’re doing well.”

Senior Nick Hardy (six carries, 46 yards) scored his first rushing touchdown of the season with a six yard run with 8:38 left in the third quarter.

The game didn’t end without a little bit of drama though. Canton used 19 plays to march 63 yards to take up the majority of the fourth quarter. The Bulldogs got 1st and goal from the 4 yard line. After three stops, Canton faced 4th and Goal from the 2 yard line. Stoughton’s Luis Monteiro made the tackle in the backfield to stop Canton, preserving the shutout.

“That was probably the most memorable moment of the game,” Sullivan said. “They made it down to the 2 yard line and we stopped them on four straight possessions to keep the shutout. We didn’t want any more points scored on this field.”

“They weren’t going to get it,” Burke said. “We played great defense all year. We’ve given up some games and some points here and there. We got all of our seniors in this game and that was the most important thing.”

Alec Ragusa led Canton with 45 yards on 21 carries while Mike Marino had 29 yards on nine carries.

With construction set to begin on the new Stoughton High School at the end of the school year, the Black Knights will be without a home field for at least three seasons.

“We’re very happy with the way things finished, I’ve been here on this field for 25 years and now that’s it,” Burke said. “It’s a little sad, it’s a little surreal. I’m happy [for the new field] but a little sad too. We’ll be on the road a lot the next couple of years.

“I’ll play in the parking lot, if we have to play on the cement, we’ll play on the cement, that’s the kind of kids we have. People know when they play us, it’s going to be a ball game and I’m so proud of that. We might not have the most talent, but we won’t back down from anybody.”