Foxboro, 4 @ Norton, 3 – Final – Foxboro scored two goals in the third period to earn its first win of the season. Taylor Sharfman tied the game midway through the third before Mike Carresi scored the game-winning inside the final two minutes. Carresi finished with a goal and assist in the win. Paul Vey and Sam Garrabrant also scored while Peter Smith had three assists and freshman Kyle McGinnis had an assist. 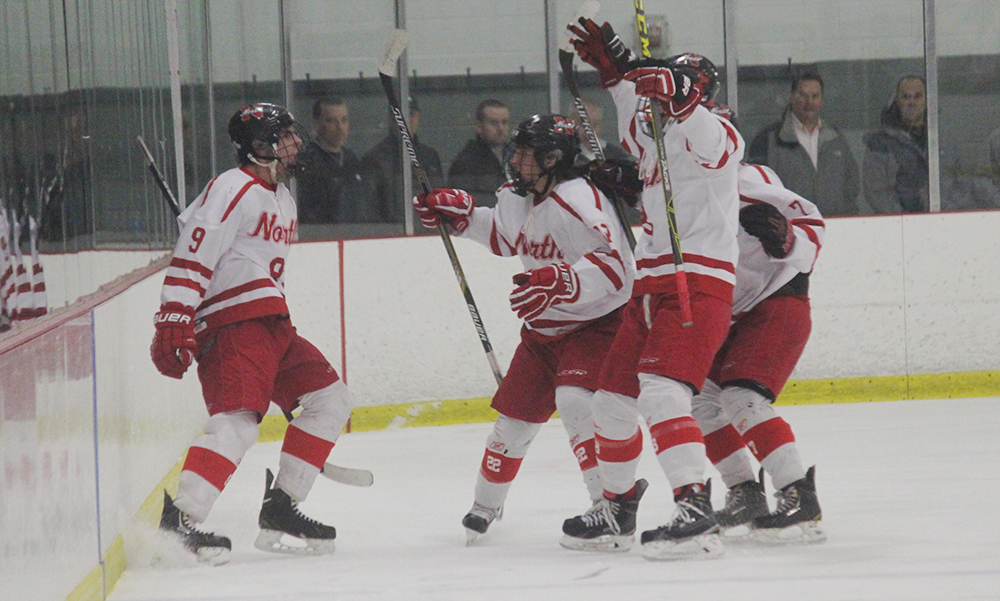 Throughout the years, Canton has had plenty of skillful goal scorers that pace the offense. Heading into this season, it’s still to be determined who will emerge as Canton’s top offensive threat.

The Bulldogs lost a lot of scoring from a year ago, including the team’s top for scorers – Matt Lazaro, Jim Jenkins, Bobby Mullaney and Seamus Pecararo – who combined for over 100 points. However, the Bulldogs have one of the strongest programs from top to bottom in the area and it will be the next man up. Senior Tommy Kilduff (nine points) and junior Jack Goyetch (12 poitns) are likely candidates to be top offensive weapons on their respective lines.

One area that Canton is rock solid is defense. The Bulldogs are bringing back their top four defensemen from a year ago, including HockomockSports.com Player of the Year Jackson Maffeo and HockomockSports Third Team selection CJ Martin. Those two will be joined once again by DJ Trerice and Brad Murphy, giving Canton a solid foundation to work off of.

Juniors Quinn Gibbs and Niko Donovan are set to compete for the starting job vacated by Justin Slocum.

“Overall, we expect to be a scrappy team with no real superstars, but a good balance of gritty forwards, experienced defensemen, and deep goaltending hopefully will allow us to compete with the top teams in the Hockomock League,” Canton head coach Brian Shuman said.

With a strong blend of experienced players and young talent, first year head coach Mark Cedorchuk is hopeful the Warriors can find their way back to the state tournament.

The Warriors return both of their top scoring threats from a year ago with seniors Mike Carresi (seven goals, 10 assists) and Peter Smith (10 goals, six assists) both back to pace the offense, as well as classmate Paul Vey. Junior Aidan Sullivan is back after an impressive sophomore season (eight points) and will be a big presence along the blue line along with classmate Taylor Sharfman and senior John Brolin.

It will be a familiar face between the pipes for Foxboro again this season as John Cronin returns as one of the top netminders in the league.

“With this core group of excellent upperclassman and talented underclassman we’re very excited about our season this year,” Cedorchuk said. “With the roster we have we’re looking to compete at a very high level and can’t wait for our season to start.”

Between a strong returning core of players and a switch to the Davenport division, 2016-2017 could be the year the Rocketeers make a serious run at a league title. Standing in the way will be Canton.

Defensively, it all starts with sophomore goalie Ryan Warren, who had a terrific freshman year and was named HockomockSports.com Underclassman of the Year. In front of him, senior Vincent Zammiello – a HockomockSports.com Third Team selection – and sophomore Brendan McHugh will anchor the defensive unit.

“In order for our team to be successful, we need to stick to our style of hockey and be well positioned and physical,” North Attleboro head coach Steve Snizek said. “We also need to take advantage of power power play opportunities while staying disciplined.”

Stoughton returns a good handful of experienced varsity players from last year’s squad, but will still be one of the youngest teams in the league.

Senior forwards Jon Lessa and Nick Hardy are two of the more experienced players on the team. Lessa was second in scoring a year ago with nine goals and also added six assists while Hardy chipped in with seven points. Sophomore Sean Doherty will likely see a lot of ice time this season after an impressive freshman season. Doherty had seven goals and 10 assists for 17 points – second most on the team.

On defense, senior Cam Doherty will anchor the blue line while sophomore Josh Hough will look to build upon a strong rookie campaign a year ago. Sophomore AJ Scott is back in goal this season after making over 600 saves as a freshman. Having a year of varsity experience will be vital for a handful of Stoughton’s returning players.

“We are young team that will improve as the season goes on,” Stoughton head coach Dan Mark said.

FOXBORO, Mass. – Prior to the season, Taunton coach Kris Metea talked about how his team had taken its lumps over the past few years, but that the players who were overwhelmed as eighth graders had now spent a few years in the program and were physically ready to make their mark this season.

On Wednesday night, in the Tigers season opener at the Foxboro Sports Center, Taunton outmuscled and wore down Foxboro for a dominating 7-0 victory.

Taunton coach Kris Metea said, “It was nice to see the boys come out and it was a little bit of a slow start but in the second period they put it together.”

The Pietrzyk brothers combined for four goals and six points for the Tigers. Senior Tyler had two goals and two assists, while sophomore Trevor added a pair of goals, including the final goal with just 2:09 remaining.

“They work hard,” said Metea. “They embody what we believe in the program. They give everything they’ve got  and they bleed Tiger hockey. They bring a ton of energy and it shows.”

Tyler Pietrzyk scored the eventual game winner nearly five minutes into the game. On a rush up ice, Will Walsh drew a defenseman and laid a perfect pass into Pietrzyk’s path and he blasted a slap shot over the shoulder of Foxboro goalie John Cronin.

Taunton outshot the Warriors 10-4 and controlled the vast majority of the offensive zone time and puck possession, but could not extend the lead. Still it was only a one-goal lead and Foxboro nearly pulled it back with two breakaways in the final three minutes of the period but Paul Vey’s shot was stopped by Justin Chappell.

Cronin (22 saves) played his part in keeping the Tigers at bay, including a big double save stopping a Walsh breakaway and the rebound. Foxboro coach Jim Genovese said that Cronin will be crucial to keep the Warriors in games this season.

“He’s going to be our backbone this year, especially because we’ve got four freshmen defensemen,” Genovese explained. “He did all the right things in the off-season to improve.”

During the first intermission, the Tigers talked about turning the dominance into goals and that message was received loud and clear. Taunton had nine shots on goal in the opening four minutes of the second period and finally got a second when Zack Albert hit Pietrzyk on a perfect outlet pass and he beat Cronin top shelf.

“We told them as much as they were carrying the play there was another level they could still bring up,” said Metea. “We talked about our ‘D’ getting shots to the net and getting more pressure in front.”

“They amped it up to another level and did everything we asked for adjustments.”

The goal seemed to open the floodgates for the Tigers, who tacked on three more before the end of the period. Defenseman Nick Terry made it 3-0 on the power play when he collected a loose puck by the near side boards and skated across the crease before roofing his shot.

Six minutes later his blue line partner David Perry added another power play goal with a wrist shot through traffic. With 22.6 left in the second, Trevor Pietrzyk knocked in a loose puck after a scramble in front to make it 5-0.

The third period was sluggish from both teams, as the big lead and fatigue set in for both teams. Walsh got his second point of the night when he finished off a nice move with a wrist shot under the bar against Foxboro backup goalie Clay Leopold. Trevor Pietrzyk tacked on his second with a tap in off Jakob Robert’s second assist.

Foxboro had chances to get back into the game, but was 0-7 on the power play including a full 1:30 with a two-man advantage in the third period. The top attacking line of Tim Luciano, Jason Galanti and Vey with Peter Smith added on power plays struggled to put the puck on net.

“We just got to move our feet quicker on the power play and move the puck better,” said Genovese. “We’re forcing passes. We have to slow it down in that aspect, but we have to be moving.”

Metea knows that these penalties could cause problems over the course of the season. “We definitely stressed that penalties will kill us against good teams. We don’t want to give them power play opportunities.”

Taunton has higher expectations this season and this was a solid beginning for the Tigers, as they start what they hope will be a run to the playoffs.