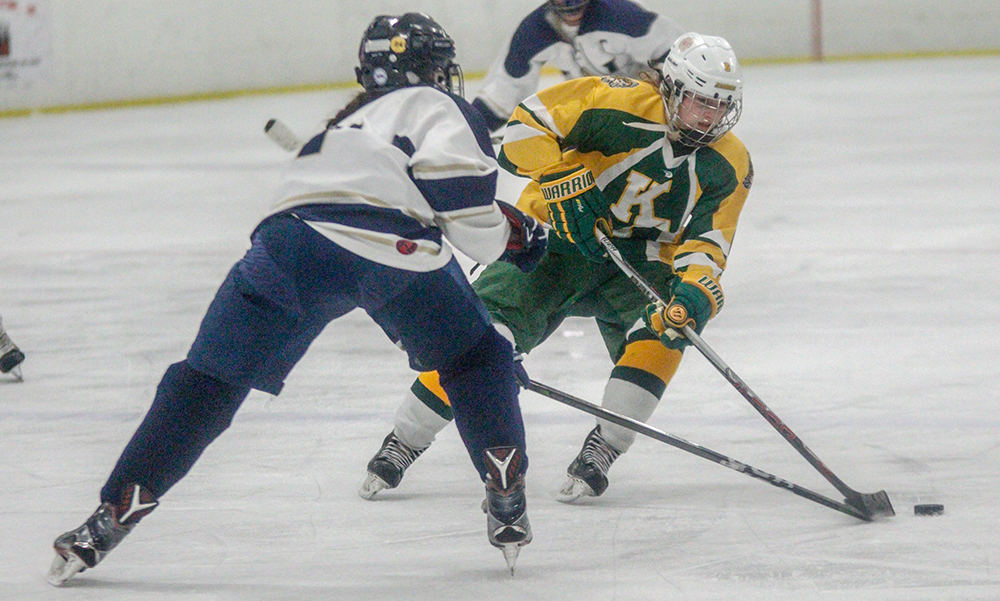 RANDOLPH, Mass – For the better part of Saturday’s contest between #14 King Philip and #3 Archbishop Williams, the Warriors were the better team on the ice.

Unfortunately, King Philip found itself chasing the game, and despite a strong push to get even, the Warriors fell 3-2 to the Bishops at Zapustas Rink.

“I would agree,” said KP head coach Jack Unger about being the better team over the final two periods. “We’ve had a rough time getting goals over the course of the season. But they keep fighting and that’s all you can ask for.

“After the first period, we possessed the puck a lot more, we had better transition through the neutral zone and better control on the puck in the offensive zone to create chances. It came through puck possession. And they were playing with urgency since we were down.”

Archies scores just under four minutes into the game to take an early lead, but King Philip balanced the play out by the end of 15 minutes, both teams putting six shots on net in the frame.

King Philip even killed a penalty shortly after going down a goal. A nice stick lift from sophomore Sammy Robinson led to a chance in front for Ali Wilson but her bid was cleared away by the defense.

Just a minute later, Meghan Gorman found some space and centered a pass to junior Alli Meehan but Archies goalie Allison Delmonte made a nice pad save to keep the chance out.

The Bishops capitalized again on an early goal, this time just 21 seconds into the second period to take a 2-0 lead. But as the midway point of the second came, the Warriors found themselves with the majority of puck time and chances on goal.

With just under nine minutes to play in the middle period, King Philip registered its first good chance when Katie Crowther connected with Gorman just across the blue line, and Gorman slid a pass towards goal but the defense came away with a clearance before Meehan could get a clean look.

King Philip’s Kyleigh Remmes made a nice hustle play to partially block a clearance from the Bishops and was rewarded with possession in the attacking zone. She tossed her shot towards goal that created a scrum in front of Delmonte but the puck was swept away by the Bishops’ defense.

“The girls could feel the shift in the momentum,” Unger said. “They had much better puck possession and that let us do more things with it and transition into the neutral zone much better than the first half of the game.”

The Warriors continued the pressure with just over two minutes to go when freshman Avari Maxwell skated in but her shot went just high. KP kept the puck in the offensive zone and it eventually popped out to the blue line. Junior Nicole Connor used a nice move to fake around the first defenseman and then sniped her shot top shelf to make it 2-1 with 2:04 left in the second.

After giving up early goals in each the first and second periods, the Warriors came out with purpose in the third and applied the pressure to the home side. The pressure resulted in a power play for KP when Archies was whistled for hooking with 12:43 to go.

KP had the puck in the attacking zone for nearly a minute but couldn’t get anything through to the goal. After a clearance, the Warriors attempted to skate back up ice but Archies’ Marguerite Leonard intercepted a cross ice pass, skated in alone and deposited a shorthanded goal to make it 3-1 with 11:21 to play.

Despite falling behind two goals to the third-seeded Bishops, King Philip continued to battle.

Junior goalie Lilly Potts then came up with her two biggest saves of the game to keep the Warriors alive. First, Leonard jumped on a loose puck and skated in alone on goal but Potts stayed with her and pushed the bid aside.

Seconds later, Bishops junior Mackenzie Heath had a partial breakaway chance but once again Potts away up to the task and made the save.

Those saves allowed the Warriors to come down the other way and capitalize. Connor came flying into the zone along the right side, getting around her defenseman before firing a high shot. The chance forced a save from Delmonte but the rebound fell right in front and Meehan alertly batted the loose puck in to make it 3-2.

“We were getting more pucks to the net,” Unger said. “Once we got into the offensive, they were able to move it around a little bit more.”

KP continued to play on the front foot and had a couple of chances over the final two minutes, but couldn’t convert any before the final buzzer sounded.