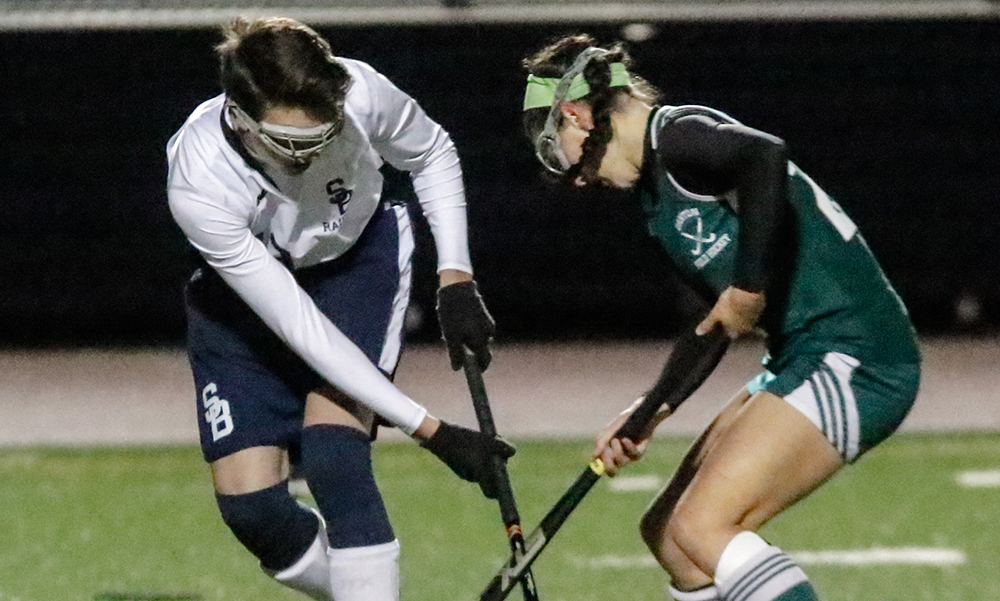 SOMERSET, Mass. – Just over four minutes into the first overtime period, Somerset-Berkley junior Lucas Crook gained possession alone to the left of Canton’s net and fired a shot that smacked against the back of the cage, giving the top-seeded Raiders a 3-2 win over the visiting Bulldogs.

While overtime game-winners are pretty common throughout the playoffs, this one stung a little bit more. Not only did it come in the D1 South Semifinal, or in a game in which the Bulldogs felt they were the better team, but it came off the stick of one of two boys in the Raiders’ lineup.

While the Bulldogs’ game plan had worked through 60 minutes, keeping Crook off the scoresheet, the Somerset-Berkley junior had his hand in creating over a half dozen offensive chances for the Raiders.

A prime example came with just eight minutes to play, in a tie game. Crook carried for possession for nearly 20 yards, beating at least two Canton defenders and drawing a third with his speed and stick handling skills. Once he drew the third defender, he sent a pass to Kara Desjarlais but Canton goalie Riley Brown came sliding out for one of her 13 saves.

And Alex Millar, the other male player that patrolled the left back position for Somerset-Berkley, stopped no less than the same amount of chances, using his speed to thwart a handful of breakouts by Canton.

“Of course [it got too physical], of course it did,” O’Connor added. “The officials didn’t keep control of it. Had they kept control of it, I think the outcome would have been different in regulation. I think it’s too bad for a team that clearly had better skill.

The unbeaten Raiders (21-0) had an ideal start, scoring just over two minutes into the game. Desjarlais got the last touch out of a scrum in front to take an early lead.

But Canton didn’t let the early deficit rattle its confidence, even after its first two penalty corners were turned away. Just over seven minutes in, during their second spell of offense, the Bulldogs cashed in.

Sophomore Kaitlyn Goyetch continued her hot streak in the playoffs, using a hard hit backhand shot that was deflected by the goalie and into the net to make it 1-1.

After back and forth action over the next 20 minutes, the Raiders seized the lead with just over three minutes left in the first half. After some offensive pressure, the ball was centered and Megan Salsinha found the back of the net.

Canton came out with a strong intensity in the second half, earning four corners early on.

In the 40th minute, the Bulldogs cashed in on one of those corners. An original shot was turned away by a great diving save by the Raiders’ goalie, but Goyetch collected the rebound and buried it into the back of the net to tie the game.

“I’m so proud of them, so proud. They just stuck in there and kept on going all the way to the end. I thought we were the better skilled team, the better overall team. I think, unfortunately, until the MIAA gets their act together and makes some changes, that’s what’s going to happen.”

The Raiders had six penalty corners in the second half but Canton’s defense, along with Brown, thwarted all chances.

“Riley played great, I think our defense played such an outstanding game,” O’Connor said. “We came in with a great game plan, I think it really took away their focus which is on the two boys. I think we did a great job of taking that away. They were able to put one in at the end but I think we were the better team.”

Crook scored with 10:57 to play in the first overtime period for the winner.

“When you have a club option, and you have kids playing club field hockey, this should no longer be an option,” O’Connor said about the boys. “Clearly there is a difference in the physicality.”