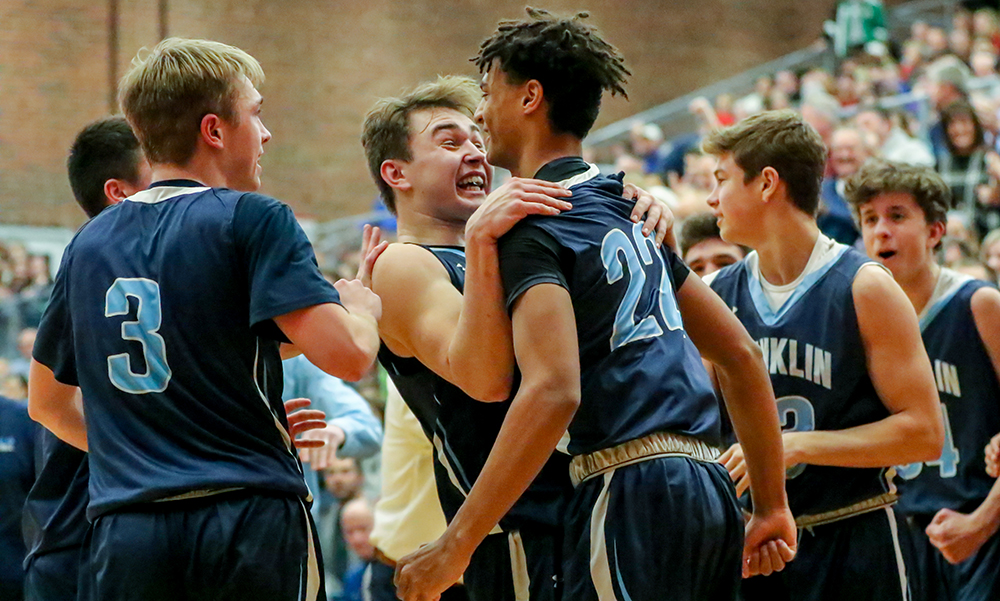 WORCESTER, Mass. – The Franklin boys basketball team has proven to be a serious threat from behind the three-point season throughout the course of the season.

The Panthers have a handful of capable shooters that can get hot any given quarter of any given game.

But on Sunday evening, Franklin couldn’t find its rhythm. Only senior Chris Edgehill connected from deep, once in the first quarter, and once each in the third and fourth quarters. The rest of the Panthers, despite some good looks, just couldn’t find the range, missing on nearly two dozen attempts from deep as a team.

So when push came to shove, Franklin turned to what the program has hung its hat on year in and year out: defense.

The sixth-seeded Panthers got five straight stops to close its D1 Central Semifinal matchup with Worcester South, including a pair of three-pointers that could have tied the game, to earn a hard-fought 45-42 win over the second-seeded Colonials.

“We were getting the looks we wanted early, I thought it was nerves and we would start to settle in but we never really did,” said Franklin head coach CJ Neely. “We turned to our defense. We can always control the defense, the offense will come and go. Some nights you’ll make a ton, some nights you’ll struggle. So we had to rely on our defense and we were able to get the stops.”

Seconds after Thomas Gasbarro put the Panthers ahead with a free throw, South’s Octavio Alexander sprinted past Franklin’s defense for two and a 42-41 advantage with just 1:39 to play.

Franklin had a turnover out of a timeout but came up with a big stop and a big defensive rebound from Gasbarro. Edgehill (20 points, nine rebounds, six assists) drained an elbow jumper to put the Panthers ahead with just over a minute to go.

South’s leading scorer Damien Joseph (12 points) was off the mark but Wilton Causey hauled in the offensive board, fouled in the process. However, Causey missed the front end of a one-and-one and Edgehill raced to track down the rebound.

South had to give the foul with 24.5 seconds to go and senior Brayden Sullivan gave the Panthers enough breathing room, sinking both for a 45-42 lead.

Joseph was off the mark on a three-point attempt and Edgehill once again fought for the rebound. Although he missed the front end of his one-and-one change, junior Andrew Byfield won the fight for the offensive board. He tossed it to Jack Rudolph, who made a terrific play while falling out of bounds to pick out Sullivan and keep possession.

South still had a chance as Sullivan missed the free throw, and the Colonials got a look at the buzzer for the tying three but it was off the mark.

“The way we’ve been rebounding the ball, you can’t really go with the foul strategy,” Neely said. “They had such length, they were getting rebounds on their free throws so I just felt like we couldn’t [foul]. We had to rely on the fact that we can get a stop, that’s been our strength all year. Holding [South] to 42 is a nice number for us. We’re happy with that…that’s two games in a row where basically one stop gets it done, and that’s what we did.

“They had a lot of size, multiple bodies they can throw in there. We did a good job for most of the game on the interior but late in the game, they made it an emphasis and made a lot of baskets.”

Matt Lazarek scored twice and Gasbarro added another bucket to help Franklin’s offense get going early, and Edgehill added a late three but the Panthers trailed 11-9 after one.

Offense was hard to come by in the second, the team’s combing for 19 points total. Junior Declan Walmsley finished off an alley-oop with a slam to get the quarter started, Edgehill added two from the field and two from the line and both Rudolph and Gasbarro scored while cutting to the basket but South maintained a lead by half, taking a 20-19 advantage into the locker room.

Franklin had a bright start to the second half, using a 9-0 run over the first two and a half minutes. Edgehill splashed in an early three and then found Rudolph underneath for a creative finish off the glass. Lazarek sank two from the line before Edgehill and Rudolph hooked up again for a 28-20 lead.

South battled back, closing the half on an 11-6 burst that made it a three-point game after three. Steven Karayan finished off an offensive rebound after another missed three from the Panthers, ending a short drought to give Franklin a 34-31 lead heading into the fourth.

The Colonials knotted the score at 35-35 following a pair of free throws from Joseph before Edgehill connected on his — and Franklin’s — third three of the game. South’s Joseph Cabrera scored in the post to make it 39-39, setting up the frantic finish over the final couple of minutes.

“It’s always great, it never gets old being here,” Neely said of the WPI experience. “It’s not guaranteed you’ll make it back here so it’s awesome. We’re excited [to get to the final], you never know how many opportunities you’ll have. So we’re going to try and get the most out of it, hopefully we’ll be up for the challenge one more time.”

Franklin boys basketball (18-5) advances to its fifth D1 Central Final appearance in the past seven seasons. And for the fourth time, the Panthers will meet up with St. John’s Shrewsbury, the top-seed in the bracket this year, on Friday at 6:00 at Worcester State University.