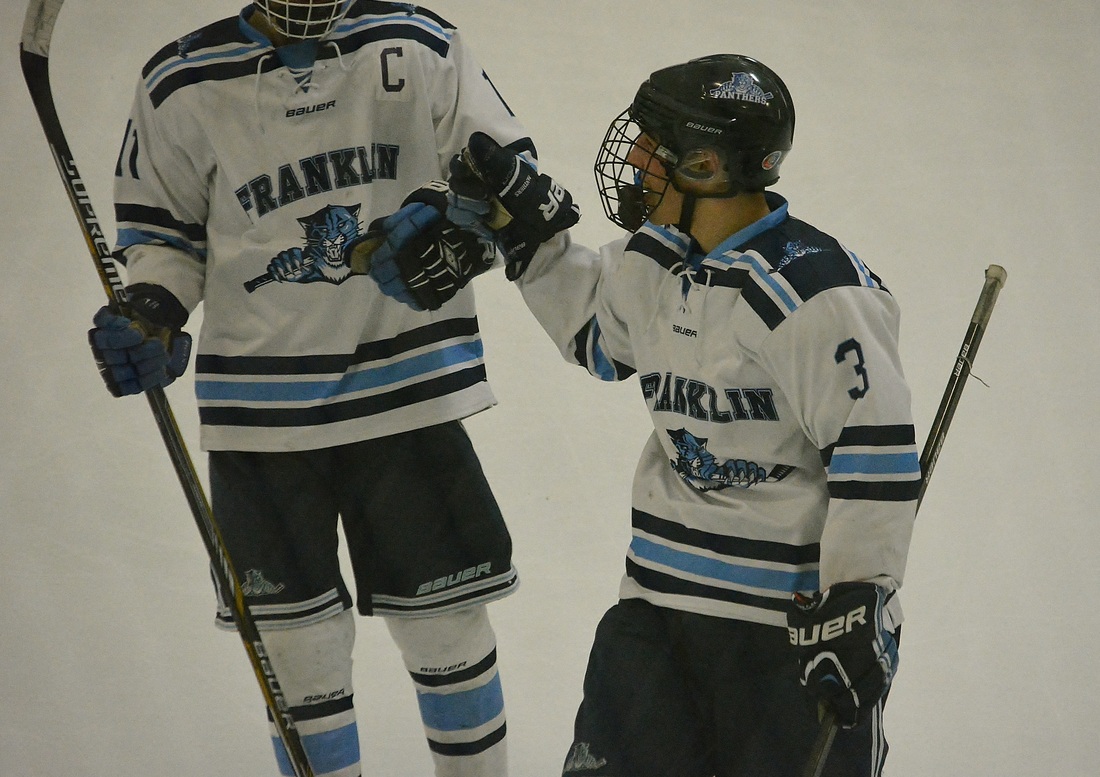 Following the game, neither coach had many positive things to say about their respective team’s performance. In fact, while Canton coach Brian Shuman and Franklin coach Chris Spillane saw things from polar opposite perspectives, they had very similar critiques.

“We were beaten to all the pucks,” said Spillane, “we lost all the 50-50 battles — the things that I commended my boys about for Thursday night (in a 3-3 tie with highly ranked Springfield Cathedral) –playing with heart and passion. You saw one team that came out to play the game and one team that didn’t.”
He added, “Fortunately, we were able to win the game but that type of effort should not be indicative of our team.”

Shuman said, “They outplayed us for a large portion of that game…We looked slow at times, we looked tentative at times, and we had no forecheck until the third period. They just outplayed us from start to finish.”

“They set the tone of the game and we were just trying to catch up with them,” he concluded.

The only positive that either coach pointed to, besides that the season was only two games old and there is time to work on the issues that they saw, was the play of the two goalies.

Canton junior Justin Slocum made 23 saves on the night, including nine in the first period to stymie a quick start by the Panthers. Slocum made big saves on Ryan Spillane, Sean Cole, and Connor Anderson that gave his teammates time to find their footing in the game and start to create chances of their own.

At that point, Shea stepped up and made a couple big stops to keep it scoreless after one. In the third period, with Canton pressing the attack he made 10 saves, including a pair of saves from close range to keep John Femia from tying the game.

“One positive thing that I have to say about the game was that our goaltender once again stood on his head,” said Spillane. “He did a great job; played his angles well; didn’t give up too many rebound opportunities.”

With the game still scoreless and just under three minutes remaining in the second period, Ryan Spillane won a face-off just outside his defensive zone.

Borkowski broke quickly and beat two Canton players to the puck. The forward held off the one defenseman in the play and then found enough space to slip the puck past Shea.

“We just had a breakdown, which you can’t do against these guys on a face-off where two guys let a guy go and don’t account for him,” said Shuman.
The goal would stand up as the winner.

When asked if his team’s performance could be attributed to a hangover from Thursday’s exciting tie with Cathedral, one of the favorites to win the Super 8, Spillane said, “[We were] living on what we accomplished on Thursday night; not focusing. When you have 21 seniors you expect — and we talked about this…for them to play like seniors and understand that. We didn’t really play like seniors tonight.”

“Tonight we were very fortunate because they carried the play from the 10-minute mark of the first period pretty much to the buzzer.”

Coming off a victory over Quincy in the season opener, Shuman saw that there are still things that his mostly young team needs to work through.

He said, “I think it’s early season and I definitely think that there’s stuff that we need to work on even more…First and foremost we have to find some guys that can compete for 45 minutes at a time.”

The Bulldogs (1-1) will play their home opener on Tuesday afternoon against the defending D2 state champions Beverly. Franklin (1-0-1) returns to the ice on Tuesday at Bridgewater-Raynham.