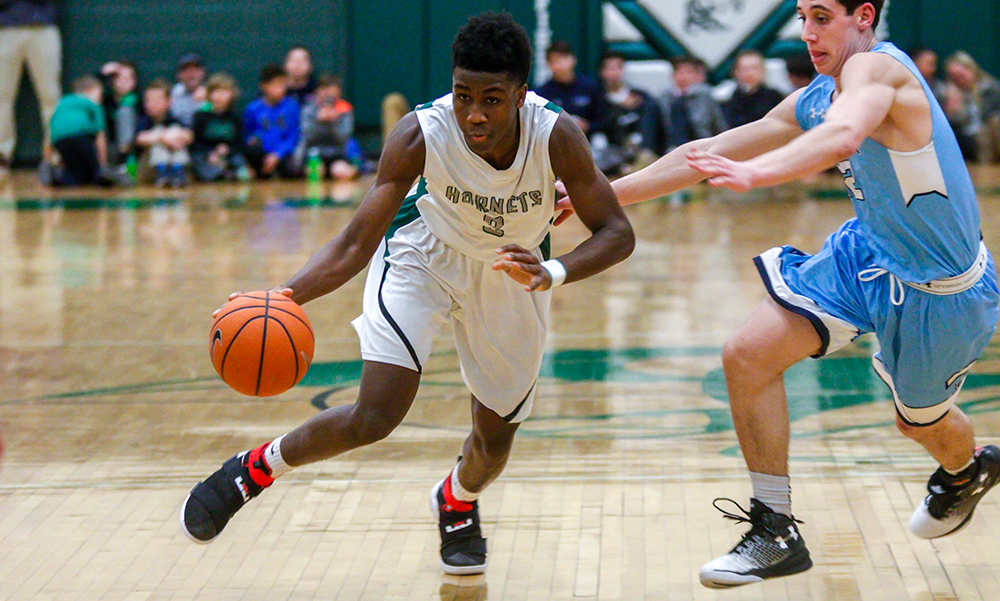 In each of the past two seasons, Foxboro junior Brandon Borde has shown vast improvement from the previous season, and we expect that trend to continue this year. Each season, Borde’s responsibilities have, and he’s delivered for head coach Jon Gibbs. Leading scorer and do-it-all guard Joe Morrison, last year’s HockomockSports.com Player of the Year, is gone so look for Borde to step it up on both ends of the court. He can score in a variety of ways, and he is tough when he takes it to the basket or gets position in the post. He’s improved on his shooting both years to become a true threat from deep. Although he is just a junior, he’s already one of the most experienced players in the league and has played in crunch time of big regular season games as well as close playoff contests.

Attleboro has almost its entire team back from last season, including point guard Bryant Ciccio. Ciccio is a pure point guard but isn’t afraid to take shots or drive to the basket himself. He was second on the Bombardiers last season in scoring, averaging 11.5 points per game. And he’s already shown in the season opener this year that he can take over a game as he scored a team-high 25 points to help Attleboro knock off Bishop Feehan. He’s a good shooter, but he is really good at getting everyone involved in the game. He is a high-energy player that puts a lot of effort in on the defensive end and helps orchestrate the offense on the other end. The combination of him and fellow junior Qualeem Charles (12.4 ppg) is a good one, but when you add in the likes of Mason Houle and Kevin Velazquez as strong scorers, the Attleboro offense could be one of the top units in the league this year.

Franklin’s Chris Edgehill became just the second sophomore to be selected to the HockomockSports.com First Team, joining Mansfield’s Brendan Hill in 2013. Edgehill enters his junior year with two years of starting experience and has helped the Panthers reach the D1 State Finals in both of those seasons. As a sophomore, Edgehill led the Panthers in scoring with 17.1 points per game while dishing out 3.5 assists and grabbing 2.5 rebounds. Don’t be surprised if he replicates those numbers this year, or even improves on them. Edgehill is one of the most dangerous shooters in the region and on top of that, he’s a gifted scorer around the rim. He isn’t afraid of contact, and he’ll make you pay with terrific free throw shooting. There will certainly be a lot of defensive attention on Edgehill after what he’s accomplished the past two years, but Edgehill will make sure to get the players around him involved.

Canton senior Devin Foster is one of two player’s from last year’s HockomockSports.com First Tram to return this season and the only senior. In fact, Foster is the only player from the Davenport division to make either the First, Second, or Third teams that is back on the court this season. The senior guard is a terrific all-around player, he does a lot of things at a high-level. He’s a strong defender with good length that can make life tough on opponents, but he makes his biggest contributions on the offensive end. Not only is he one of the top outside shooters, something that he’s improved on each year, but he’s really strong when taking the ball to the basket. He averaged 17.1 points per game last year, draining 40 three-pointers, and added 5.5 rebounds and 4.5 assists. The biggest challenge this season will be how much attention he will get defensively because the Dogs graduated a lot of scoring around him, but Foster is the type of player that makes others around him better.

Sharon senior guard Alex Kaufmann is certainly one of the most gifted scorers in the league, but the Eagles are hoping he becomes one of the most consistent players in 2018-2019. We’ve seen moments of brilliance from the guard, whether it be shooting from distance or taking defenders off the dribble to the basket. There’s no question he has the ability to score, it’s just a matter of how frequently he can string together big scoring nights. As a senior captain, the Eagles are going to lean on Kaufmann, and we believe he’s ready for a big breakout season. Although he’s only 6’0, he plays much bigger than his height and gives the Eagles options on how to utilize him best. Now in his third year on varsity, look for Kaufmann – along with the Eagles as a whole – to have some big performances this season.

Only one player from last year’s list is back on the watch list again this year, and that’s Taunton junior Dante Law. Law is a raw talent but can be one of the most dangerous players in the league when he’s on. He can shoot from the outside or he can get to the basket, and his length gives him a big advantage. He’s one of the most athletic players in the league and that fits perfectly into the system that the Tigers want to run. One of his best attributes is the ability to play multiple positions. He can handle the ball if need be but he plays well off the ball and can matchup with fours and fives on defense, giving head coach Charlie Dacey some flexibility with his lineup. After two years on varsity, we’re looking for Law to make a big leap this year and be a top player in the league.

After showing improvement in each of the last two seasons, it looks like North Attleboro senior Josh Montage is poised for a big year. The guard has taken on more responsibility in each of the last two seasons and emerged as the team’s leading scorer a year ago with 13.7 points per game. With just two seniors gone from last season, the Rocketeers look to be a cohesive group and their experience should give them an edge especially early on in the season. Montague is a talented finisher and can score both inside and out. He isn’t afraid to pull up for big shot in a big moment but he is also a tough guard when he attacks the basket. While some of his finishes can be a bit wild, he’s the type of player that makes a shot and leaves you wondering how it went in.

A lot of players saw time last year for the King Philip Warriors but one that stood out was now senior Bruce Santillus. In his first full year on varsity, Santillus had breakout moments and really showed what he is capable of. Now in his senior year with a season of experience under his belt, look for Santillus to perform at a high level consistently. His length and athleticism make him a tough matchup on both ends of the floor. Looking across the league, although he’s more of a guard, he’s one of the best returning rebounds in the Hock. He attacks the basket strong and is always a contender for coming down with a miss, whether it’s on his own shot or someone else’s. The Warriors have a solid group of seniors this year with Tyler and Tim Nault, Ian Khung, Michael O’Brien, Terry Jacobs-Baston, and Sam Sesay along with Santillus so look for KP to be a competitive group throughout the season.

Mansfield senior Damani Scott is coming off some of the best playoff performances we’ve seen in recent years, helping the Hornets win their first state championship. Scott was quick to credit his teammates, and rightfully so, but there were times where he was unguardable and playing like a top player in the state. If he can bring that work ethic to this season, and the Hornets can find the team chemistry similar to last year, look for Mansfield to be a contender at the end of the season. During the playoffs last year, he led the Hornets in both scoring with 18.5 points per game and rebounding (6.7 rpg). He really improved his three-point shooting from the beginning of the season to the end and made some big shots down the stretch. But his best strength was taking players on one-on-one when needed because not many were able to stay with him, and if they were, he was still able to finish at the rim. Mansfield’s biggest challenge this season is getting a lot of new faces up to speed as Scott, Tommy Dooling and Khristian Conner bring the experience.

Last season, Brendan White had a breakout season and became one of the top scorers in the league. This year, White will be the main source of offense for the Hawks but his leadership will be key as well with so many young players on the team. In his full first year on varsity, White surprised defenses with his ability to score from deep or take a defender off the dribble. At 6’1, White isn’t the biggest mismatch in the league but his quickness and willingness to take the tough shot helped him become a top scorer. He was the leading scorer for the Scarlet Hawks last season with 14 points per game and is already off to a good start this year with 21 points in the season-opener against Algonquin. White is also a good defender and overall a terrific athlete.