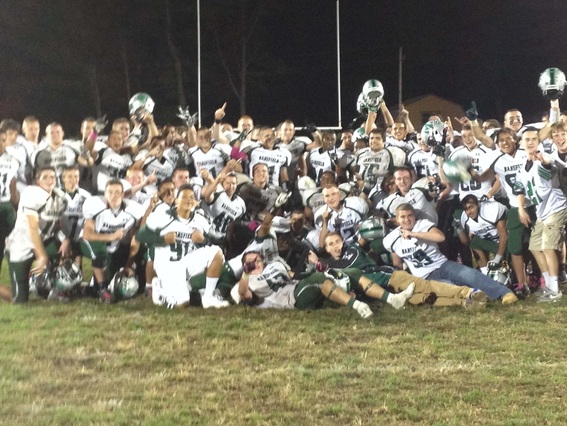 WRENTHAM, Mass. – Despite all of the hype leading up the game, it wasn’t Mansfield’s offense or King Philip’s defense that had people talking after the game.

The Hornet defense stepped up big and Mansfield used two fourth quarter touchdowns to beat King Philip 20-7, staying undefeated and handing the Warriors their first loss of the season.

After giving up a 4-yard touchdown run by Mark Glebus on KP’s first offensive drive, the Hornet defense shutout a talented Warrior rushing game for the last 39:22 of the game.

“I think the story of the night was our defense,” Mansfield head coach Mike Redding said. “We gave up one early and then settled down and played great run defense against a very physical team that can run the ball. All week that was what we were preaching. Everyone was going to talk about our offense against the defense but the story of the game is going to be our defense playing against their run game and if we could stop them we have a chance to win.”
The Hornets continued to stuff the KP rushing attack and limited their passing game as their offense searched for a spark against a stout Warrior defense.

Their first half spark came in an somewhat unexpected way, not because of who, but rather a little bit of how. Miguel Villar-Perez used a sweet cutback move to take a handoff 88 yards for Mansfield’s opening score, but it wasn’t how they had it mapped out.

“We had nothing going and I couldn’t come up with the call,” Redding said. “We actually lined up wrong and blocked it wrong but we adjusted and Miguel made a great cut back. He’s been a clutch guy all year. That was definitely a big play. You don’t want to go into halftime shutout and have them feeding off that.”

But after that run, it was back to work for both defenses, keeping it 7-7 through the end of the first half and throughout the third quarter. When the fourth quarter rolled around, the Hornets found their second spark in junior Brendan Hill and senior Kyle Hurley

On just the third play of the quarter, Mansfield quarterback Kyle Wisnieski faked a handoff before firing a pass over the middle. Hurley made a great move back to the ball, tipping it up and hauling it in for a completion. The next play saw Wisnieski fumble, quickly pick the ball up and fire a 22-yard touchdown pass to Hurley to put Mansfield up 14-7.

The Mansfield defense once again held, forcing a three and out and a punt on the Warrior’s ensuring drive and Hill came up big for Mansfield. On third and 10, Wisnieski fired a pass in the vicinity of both Hill and senior Michael Hershman, but a KP defender was able to get his hands to it. But instead of an interception for the Warriors, the balled slipped through and fall into the hands of Hill for a 14 yard pick up. Just four plays later, another play action pass saw Wisnieski find Hill on an outside slant for a 21 yard pick up to the KP 5-yard line.

Villar-Perez went up the middle for five yards and his second touchdown of the game, and he finished with 12 carries, 103 yards and 2 TDs. The extra point missed but Mansfield led 20-7 with just 4:20 left in the game.

On the ensuing KP drive, Warrior QB JJ Dillon took a high snap and was unable to get full control and Hill swooped in from his defensive end spot and recovered the fumble.

“He’s just unbelievable,” Redding said of Hill. “We kind of just got to the point were we said just throw it to him, I don’t care if he’s covered, just throw it and get a little height on it and he’s going to make the catch. He’s a clutch guy and they were all over him with the double coverage, banging under and the safety over the top and they did a great job of trying to take him out but it got to the point where we said just get him the ball and let him make plays.”

Despite KP giving up the most points allowed in a game this year – just 20 – the final number for Mansfield’s offense was what the Warriors had aimed for throughout the week.

“I think our offense needed to help our defense out in the second half a little bit,” KP head coach Brian Lee said. “You know, if you leave them out there and leave them out there, eventually those caliber of dudes are going to make plays and thats what happened. When you’re playing a team like that, you know they’re going to make their plays We said 20 all week long was what we wanted to hold them to so offensively we just didn’t do the job but defensively I’m pretty proud of how we played.”

Mansfield has clinched a share of the Kelley-Rex division according to Redding and will win it outright with a win next week at Franklin. KP will look to bounce back with another offensive heavy team in Attleboro.