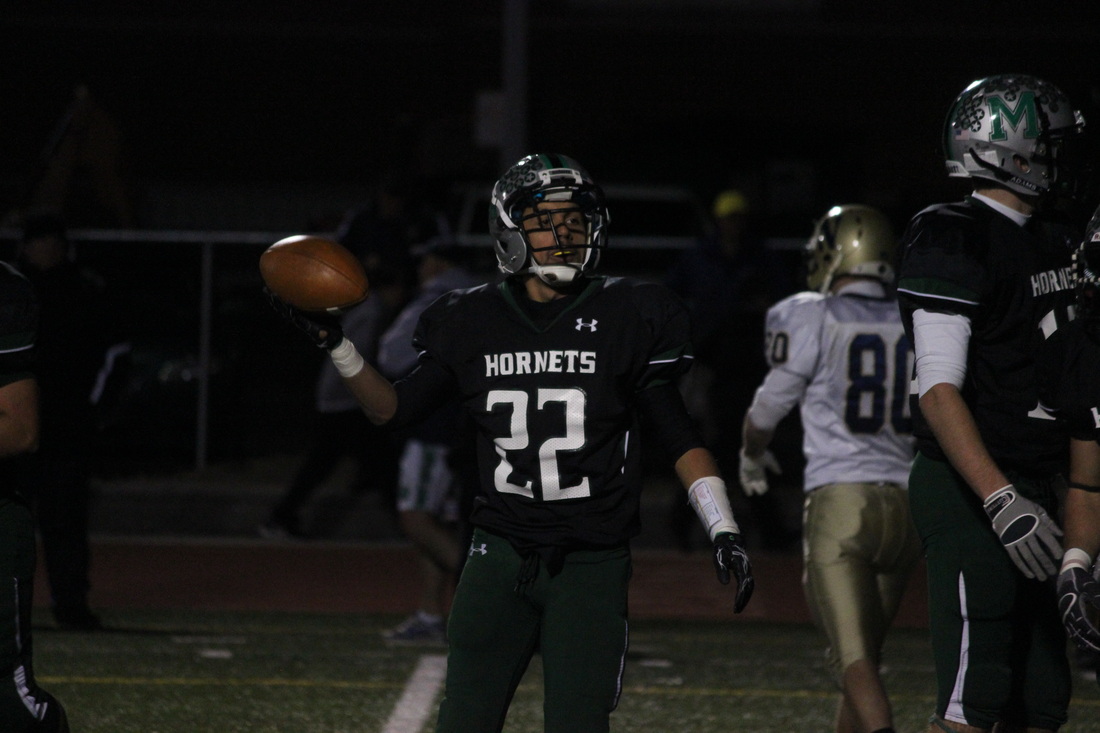 MANSFIELD, Mass. — It a matter of just a few minutes, Mansfield went from getting ready to put in their back up offense and defense to holding on to their lead for dear life, eventually escaping with a 42-35 win over Needham.

The Hornets took a 28-7 lead into halftime and after coming up with an interception on Needham’s first drive of the second half, extended their lead to 35-7 with 2:11 left in the third quarter.

But on the ensuing kick off, Needham senior captain Mike Panepinto took the ball 91 yards for a touchdown and suddenly the Rockets had life again. Mansfield went three and out and on just their second play, Needham quarterback Ryan Charter hit Mike Elcock for a 66-yard touchdown just 11 seconds into the fourth quarter and Needham closed the gap, trailing 35-21.

“We thought we had it put away at 35-7 and we made the mistake to kick it to Mike [Panepinto] and he hurt us with the return and it seemed like all of a sudden their juices start flowing and they played good defense and they scored again,” said Mansfield head coach Mike Redding.

The Rockets then recovered their onside kick attempt and took the ball 44 yards in just 1:48, capped off by a 13 yard run from Panepinto to make it a one score game at 35-28.

Mansfield once again went three and out and punted but the Hornet defense came up with a huge play. On the Rockets second play, Pinepanto ran to the left but Mansfield senior defensive back Mike Barresi – who had the interception earlier in the half and a pass defense in the end zone in the first half – ripped the ball out and fell onto it to give possession back to Mansfield. Mansfield’s first play saw quarterback Kyle Wisnieski connect with Brendan Hill for a 51-yard touchdown pass and Mansfield pushed the lead back to a two score game at 45-28.

“That probably was the turning point of the second half,” Redding said. “There were a lot of them in the game but that seemed to be the one that kind of allowed us to get out of here with a win.”

It was the second time that Mansfield forced a fumble from Panepinto in the game, which was something they had focused in on in practice.

“On the strip, we were saying all week that [Panepinto] puts the ball on the ground,” Barresi said. Barresi also credited his teammates for the reason he was able to come away with his interception. “We knew he put the ball on the ground four times last week against Duxbury so we emphasized stripping the ball all week in practice.”

Needham came down and scored again, going 69 yards on 9 plays as Charter hit Elcock for a 13-yard touchdown. Mansfield then faced 3rd and 5 with 2:10 left at the Needham 45, but Wisnieski calmly dropped back and hit Hill for a six yard gain and a first down. Two plays later, Wisnieski hit Hill for a 29 yard catch to ice the game.

“We were debating whether to throw or run but we had a one on one match up and anytime we get that we feel like he can beat the one on one,” Redding said of the third down call. “Kyle threw it high, under threw a little bit, and let Brendan go up and get it.”

Wisnieski finished 14/17 for 223 yards and four touchdowns, three of which went to Hill (7 catches, 153 yards, 3 TDS). Villar-Perez had 87 yards on 16 carries and two touchdowns while catching two passes for 24 yards and a touchdown.

“I think both teams showed unbelievable character,” Redding said. “A lot of teams would have quit at 35-7 but they kept battling and all of the momentum went there way. Then we sucked it up and found a way to get a score to get the lead back to 14 which we needed. It was great playoff football.”

In balls targeted at him, there was only one ball that Hill didn’t catch – and it was because of pass interference that set Mansfield up at the 2-yard line.

Redding’s decision to throw to Hill on third down in Needham territory late in the game showed how much confidence he has in the junior.

“I’m glad we have Brendan Hill catching the football for us – throw it near him and he’s going to make a play,” Redding said. “Most times I would have run the ball but you have so much faith in our guys to throw it even when its a run down late in the game.”

Mansfield will now play Barnstable in the D2 South Finals, likely to be played next Friday.

“Hey it’s Division 2 South, this division is loaded and a wins a win,” Redding said. “We get to move on and play another tough game with Barnstable.”