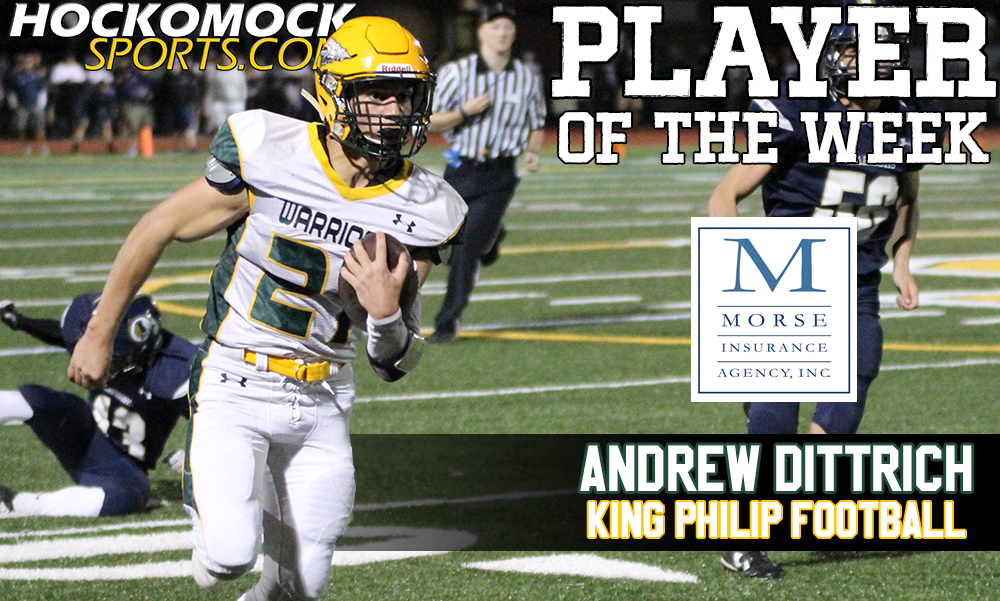 King Philip senior Andrew Dittrich has been selected as the HockomockSports.com Player of the Week, presented by Morse Insurance, for Oct. 15 through Oct. 21. Dittrich is the seventh player selected for the 2017-18 school year, third football player chosen this season, and second King Philip player to be selected in as many weeks (following Sydney Phillips of KP volleyball).

Dittrich was a defensive standout for the Warriors on Friday night in a win over Taunton that clinched the second straight outright Kelley-Rex division title for the football program and third title in the past four seasons. The senior defensive back had three interceptions against the Tigers, returning two of them for touchdowns in a 35-7 road victory.

“I’ve never seen three picks in a game by one player, let alone two of them being for touchdowns,” said KP head coach Brian Lee. “As I told the team postgame, it’s no surprise that in a game that we had so much on the line, the player who has invested the most has the best game!”

In the first quarter, Dittrich intercepted a pass and returned it 44 yards for the game’s opening score. In the fourth quarter, he recorded his third interception on the goal line, preventing the Tigers from getting on the board and he took it back over 100 yards for another KP score.

It was the third interception return for a touchdown by a KP player this season. The Warriors boast the league’s stingiest defense, allowing only 66 points through seven regular season games. KP enters the playoffs riding a 20-game win streak and will be the top seed in Div. 2 South looking to defend its Super Bowl title from a year ago.