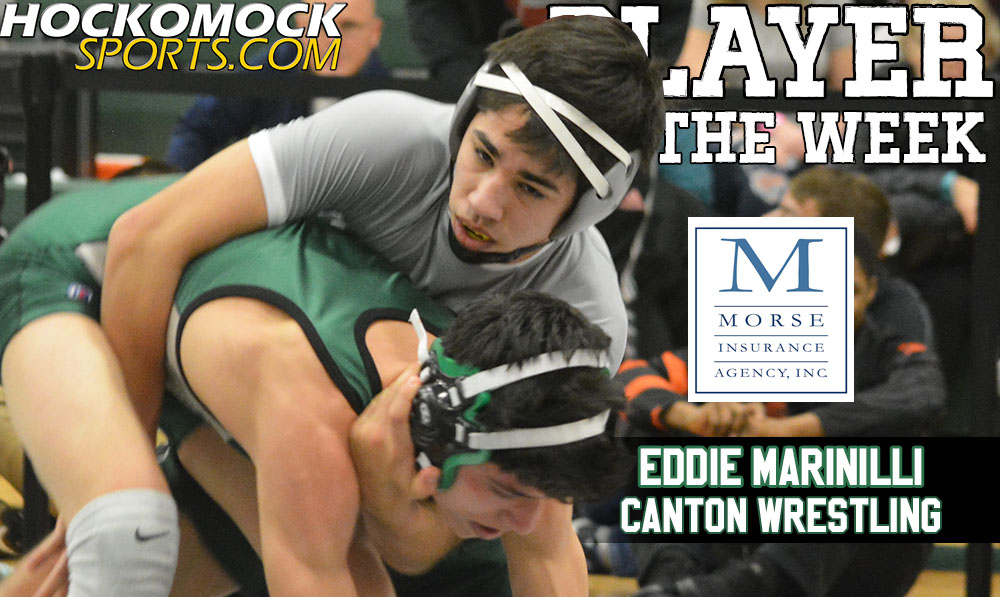 Canton sophomore Eddie Marinilli has been selected as the HockomockSports.com Player of the Week, presented by Morse Insurance, for Feb. 18 through Feb. 24. Marinilli, who is 41-3 this season, is the 21st player selected for the 2017-18 school year and 11th player chosen during the winter season.

Marinilli made Canton wrestling history for the second week in a row, when he followed up his Div. 2 state championship with an All-State title this weekend at St. John’s Prep. Marinilli, wrestling at 138 pounds, took the lead against the top seed, Sean Herbert of Melrose, with a second-period escape and held on for a 1-0 win in the final. He is the first wrestler in program history to win either the Div. 2 or All-State titles.

“He wrestled on his terms every match and was never phased by the opponent or how high the stakes were,” said Canton head coach Brian Caffelle. “It’s impressive enough to have that demeanor as an upperclassman, but it’s even more special when it’s coming from a sophomore. To be the first All-State Champion in program history in the way that he did it won’t be forgotten for a very long time.

Marinilli reached the final at All-States with a series of close wins. After starting the tournament with a pin in the round of 16, he won his quarterfinal match with a third-period escape and then used a second-period takedown to beat Mahari Miller of Springfield Central in the semifinal avenging one of his three losses on the season. He avenged another one of his losses, edging Herbert in the title match. In last week’s Div. 2 state tournament, Marinilli had a pair of pins to start, won 4-0 in the semifinal and then used a second-period takedown to win the title.

In addition to his state titles, Marinilli also won the title at the Div. 2 Central meet, helping the Bulldogs finish fourth as a team. He also won his second individual title at the Hockomock Championships, getting a pin in the final and helping Canton finish fifth as a team. Marinilli won last year’s Hock title at 126 pounds before jumping up to 138 for this season. He was also selected as Player of the Week last season after his fourth place finish at All-States, which was a program-best for a freshman.