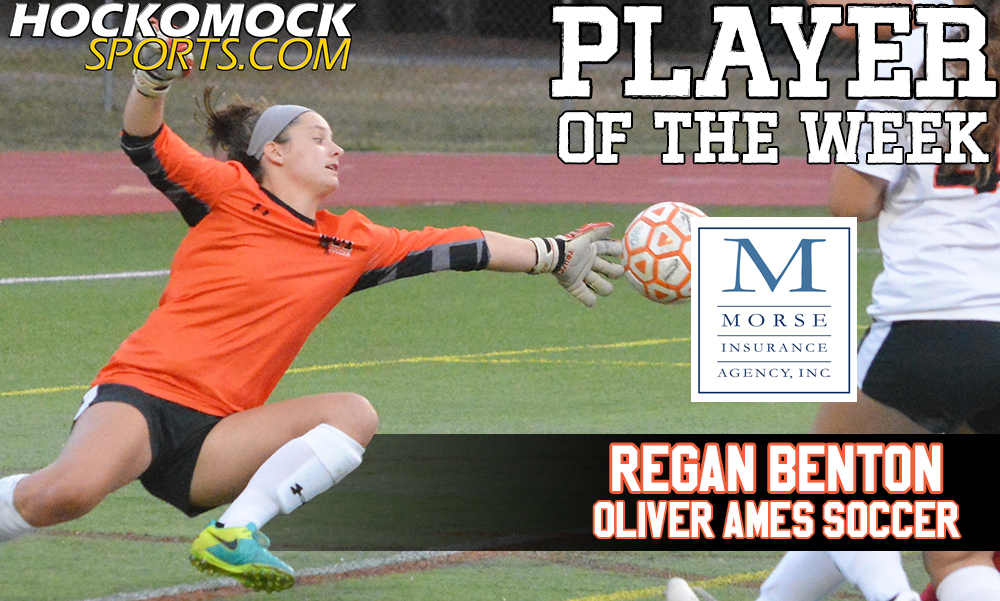 Oliver Ames senior Regan Benton has been selected as the HockomockSports.com Player of the Week, presented by Morse Insurance, for Sept. 18 through Sept. 24. Benton is the third player selected for the 2017-18 school year, second soccer player this season, and second OA girls’ soccer player to receive this honor.

Benton came through for the Tigers this week with impressive performances in goal to secure a pair of wins for OA. The 2016 Eastern Mass. all-star and 2016 HockomockSports.com Best XI selection made 14 saves to help the Tigers hold off previously unbeaten King Philip, which prompted praise from KP coach Gray Pichel, who said that Benton is “one of the best goalkeepers in the state.”

OA coach Britt Sellmayer said of Benton, “Regan has worked very hard at her craft the past four years. She has improved in every aspect – conditioning, technical, and tactical. She was at her best last Tuesday against KP.”

Benton also recorded seven saves in a win over Brockton, which meant a sweep of the season series with the Boxers. For the season, Benton has allowed only nine goals in seven games, despite playing behind an inexperienced defensive unit, and is tied for the league lead with four clean sheets.