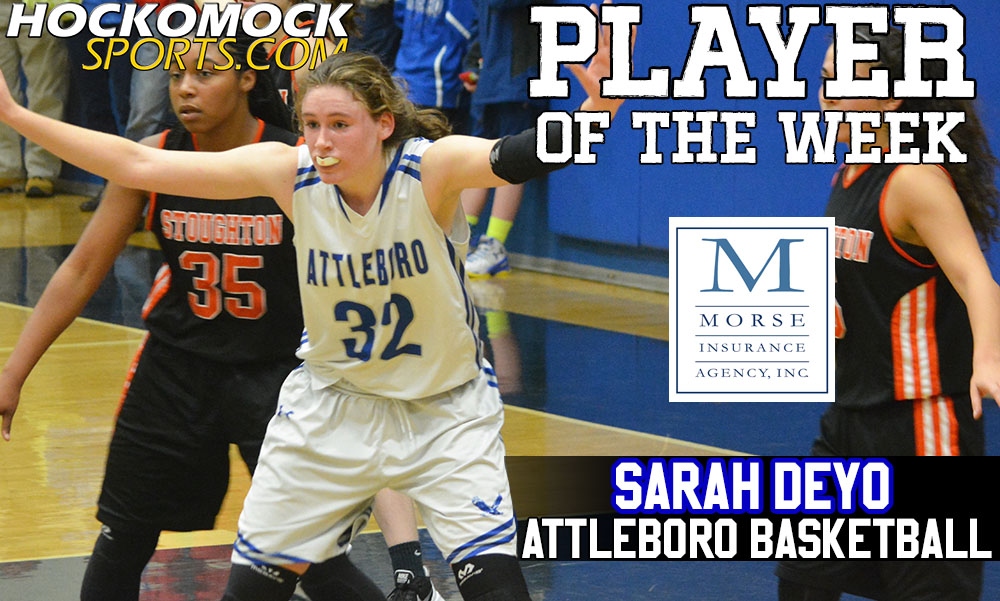 Attleboro senior Sarah Deyo has been selected as the HockomockSports.com Player of the Week, presented by Morse Insurance, for December 18th through December 24th; the 13th player chosen during the 2016-17 school year and second for the winter season. Deyo has been a double-double threat every night, as the Bombardiers have jumped out to a perfect 3-0 start to the season.

In Attleboro’s lone game last week, Deyo scored 28 points, pulled down 15 rebounds, and dished out seven assists, while recording the 1,000th point of her four-year varsity career in a win at Sharon. In the previous game, on the Friday before, Deyo had scored 10 points and grabbed 20 rebounds against Stoughton.

“You’re looking for a leader,” said Attleboro coach Rick Patch, “and often times she’ll finish doing cardio and she’ll see other kids still running and she’ll jump in and she continues to encourage.”

When it was mentioned that Deyo reached the milestone while unselfishly dishing out seven assists, Patch replied, “I think that says everything about her and what our program is about… That’s part of her commitment to the team…She’s a very selfless kid who really just wants to win.”

Deyo, a Southern New Hampshire-commit, is averaging more than 20 points and 10 rebounds per game this year. She is the second straight Attleboro basketball player to be named Player of the Week this season, following classmate Jake Dunkley.