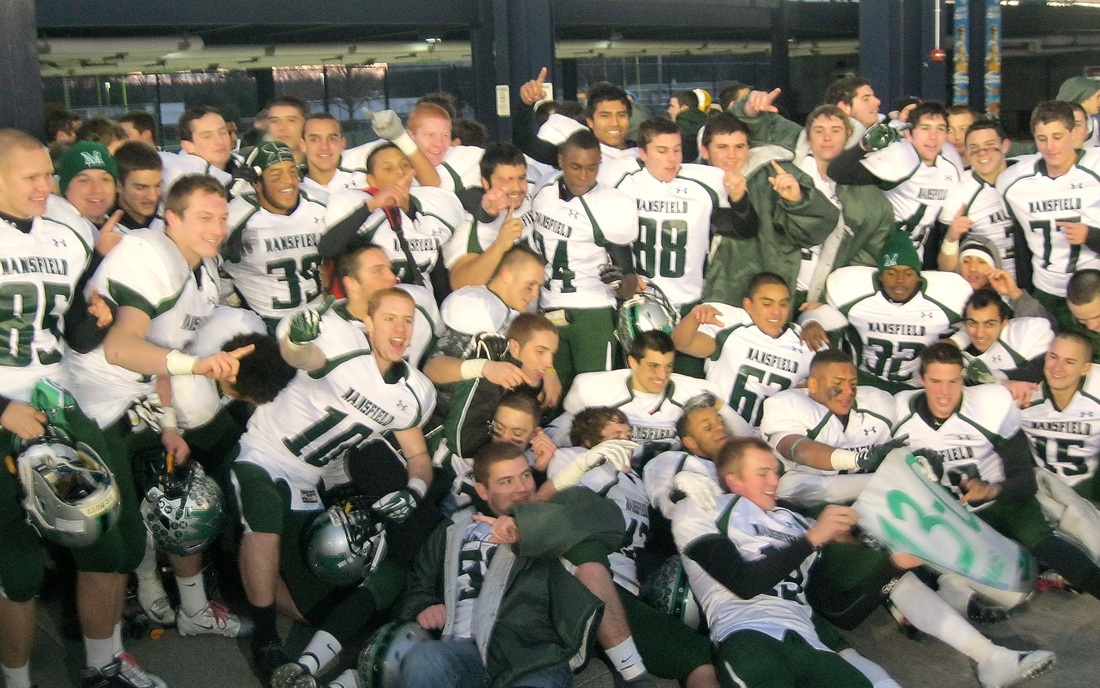 FOXBORO, Mass. – After a heartbreaking loss in this same game last season, the Mansfield High Hornets capped off an undefeated season by defeating the St. John’s (Shrewsbury) Pioneers 28-14 to win the MIAA Division II Super Bowl.

“We asked a lot of guys to do a lot of different things today without Brendan [Hill] in,” said Mansfield head coach Mike Redding. “Chris [Buchanan] ran hard, Miguel [Villar-Perez] played with a bad shoulder, ran hard, [Alex Ruddy] had a couple of good carries, Q’Ra [Guichard] came in and blocked well. Just a lot of guys doing what we had to do to find a way to win. Great team effort.”

Asked if he thought Mansfield could’ve still won after giving up all those turnovers, running back/wide receiver Mike Hershman said no, adding “that was probably the sloppiest we’ve played this year.”

The Hornets received the ball to start the game and took off running on the feet of Miguel Villar-Perez (18 carries, 120 yds, TD), Mike Hershman (8 carries, 66 yds, TD), and Alex Ruddy (4 carries, 28 yds, 2 TDs), with the latter capping off a long first drive with a one yard touchdown rush. Alex Thomspon added the PAT to give Mansfield a 7-0 lead midway through the first quarter.

Things wouldn’t work out so well for Mansfield on their next drive; however, as a fumble near midfield was recovered by the Pioneers, from where quarterback Andrew Smiley (8-23, 63 yards on 14 carries, 84 yards passing, TD) rushed a sneak all the way to the goal line, then took it in himself on the next play. The successful PAT by John Coveney tied it all up 7-7 late in the first quarter.

“[Smiley’s] a great athlete,” said Redding. “We knew we had our hands full with him and Combs running the zone read, they do it so well, and then they keep you honest with the four great receivers.”

He also praised the senior quarterback for his future military service, for which he has already committed to after high school, saying he was proud to compete against such a young man.

Fumbles would trouble the Hornets again as they turned possession over again at midfield shortly before the end of the first quarter, but their defense would come up big as they forced St. John’s to turnover on downs.

But fumble trouble followed the Hornets into the second quarter, as two more fumbles set up St. John’s in Mansfield territory; one of which resulted in a 19 yard touchdown run by Shane Combs (14 carries, 100 yds, TD) which gave the Pioneers the 14-7 lead. Quarterback Kyle Wisniewski was picked off for Mansfield’s fifth turnover, but only two plays later, Hershman picked off Smiley to set up Mansfield for a final drive before the half, which Mansfield took to the Pioneers 30 yard line before the clock expired.

“Going into halftime, people were angry, but no one got down [on themselves]. Our motto is never surrender,” said Hershman.

When the second half got underway, the Hornets continued their momentum from just before the break, with Villar-Perez picking off St. John’s on their first drive then capitalizing on the opportunity as Ruddy ran it in from 11 out to bring Mansfield within one, but the extra point would elude them as the PAT by Thompson went just wide.

“The big thing in the third quarter was if [St. John’s] scored next, we’re in trouble,” said Redding. “We had to get a stop, we had to get the next one, and Villar-Perez, he makes the pick, we punch it in, and [it’s] a whole new game.”

The Hornets took the lead later in the quarter as Hershman capped off their drive with an eight yard touchdown and added two more as Villar-Perez successfully converted to make it 21-14 as Mansfield looked very much the team in control.

The Hornets put up their third unanswered touchdown late in the fourth quarter after a long seven minute drive as Villar-Perez ran it in from three and Thomspon added another PAT to make it 28-14.

From there, Mansfield’s defense (see more here) held down the Pioneers and forced them into a final turnover on downs that allowed them to take a knee and finish off their undefeated season with a state title.

“There’s no better feeling right now,” said Hershman, summing up all his teammates’ and communities’ feelings.

Feedback for student reporters can be sent to info@HockomockSports.com. Cameron Merritt can be followed on Twitter at @RedSoxCam1996.

Follow Us
Latest posts by Student Reporter (see all)