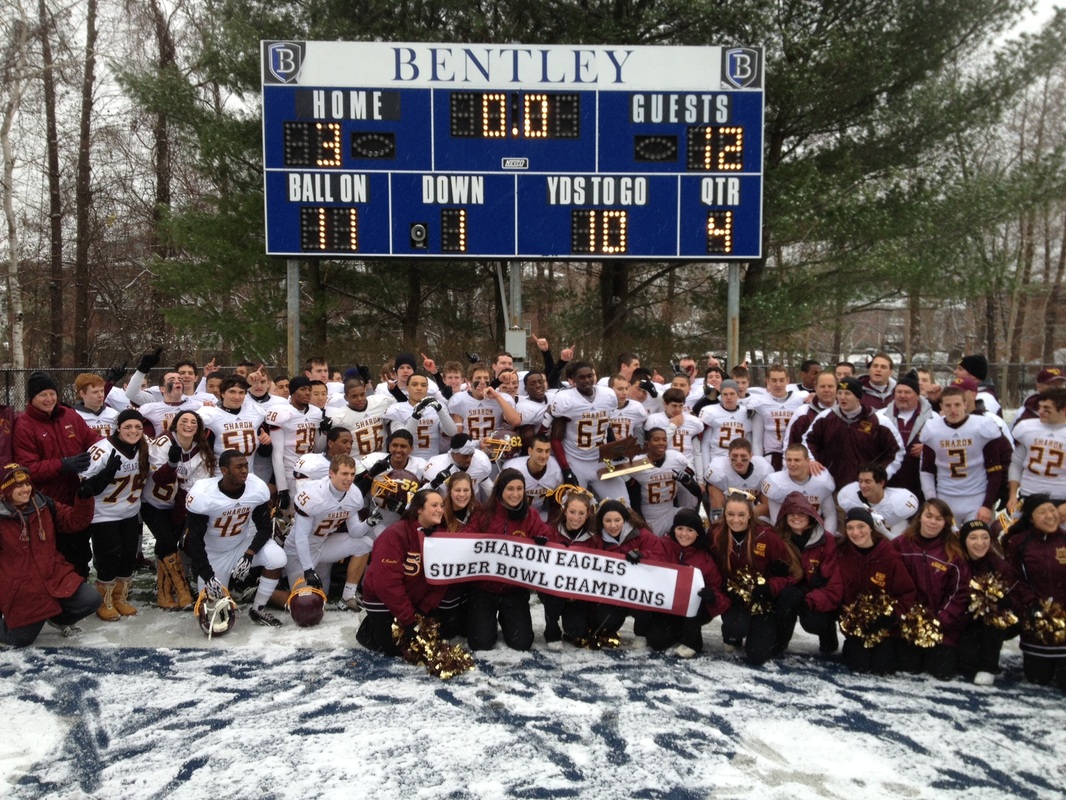 WALTHAM, Mass. – Two Hockomock teams played for Super Bowls at Bentley University Saturday. The Sharon Eagles kicked off the day with an impressive 12-3 win over Wayland. Mansfield was unable to complete the Hockomock sweep, falling 27-7 to a strong Reading side.

Sharon struck just before halftime as senior quarterback Sean O’Neill lofted one to Asnes. The running back took the ball outside and the 5’7” senior used every inch to stretch out and break the plane.

In terms of game time, Sharon struck twice within a minute. On the first play from scrimmage in the second half, Asnes broke up to the left before scampering back to his right, going 71-yards for another touchdown.

When it looked like Wayland was going to strike back — the ball at the Sharon 9 — the Eagles defense came up big. A negative rush, a bad snap, and an incompletion forced a fourth down. Wayland settled for a 30-yard field goal.

Sharon’s defense continued well into the fourth quarter. On a third down, Adams Banks and Erik Kushner came up with a huge sack. Four plays later, Hockomock defensive MVP Brad Schiff came up with his first career interception that Morse called the “nail in the coffin.”

“This is always our goal,” Schiff said. “We strive for it year after year. I never thought we would make it this far, but that’s what happens when you put in the work and time – you get where you want to be.”

Reading 27, Mansfield 7
Mansfield scored first, but as it’s been the majority of the season, Reading didn’t allow a second touchdown on their way to a 27-7 win over the Hornets in the Division 2 EMass Super Bowl.

The win earns revenge after Mansfield shocked Reading in the second half of the 2010 Super Bowl.

The Hornets started out very strong with a Robbie Rapoza opening kick return which turned into a fourth down touchdown conversion from junior quarterback Kyle Wisnieski to sophomore Brendan Hill.

But it turned out to be a flash in the pan as Reading shut the door on Mansfield’s offense. Reading responded with a solid drive. Senior Alex Valente broke out a 51-yard run that set up a Drew Belcher 4-yard plunge.

It looked as though Mansfield’s offense would stay on a role when Hill hauled a pass inside the 10 but their rushing attempts were stuffed at the 1-yard line twice, forcing a turnover on downs.

Valente then took the hand off the next drive and fought through a huge pile, breaking free on his way to a 99-yard touchdown run. The two-point conversion was good, giving Reading a 14-7 lead and the Rockets never looked back.

Two second half touchdowns — a fluke tipped pass in the end zone and a 75-yard Jared Barros interception return — helped Reading seal the deal and shut down the Hornets.

The good news from the Hornets is that their 3 main options on offense — Wienieski, Hill, and junior receiver Michael Hersman — will all return next year in search of their own revenge tour.