Below are the official Hockomock League Boys Lacrosse All Stars.

NORTH ATTLEBORO, Mass. – For the second time in three years, Hilda will be heading back to Attleboro High.

Brendan Nunes rushed for 205 yards and two scores and caught a third touchdown from sophomore Cam Furtado, who also added two rushing scores of his own, as Attleboro (7-4) rolled to a 34-21 victory to win its second straight Thanksgiving Day game against North Attleboro at Community Field.

Attleboro head coach Mike Strachan said, “North Attleboro is one of the best programs in the state and we had to play one of our best games to win this afternoon and I think we did. We executed offensively and defensively and in special teams we did.”

Nunes started his season with four touchdowns in the opening win against Bishop Feehan, but late in that game picked up a high ankle sprain. He missed 2-1/2 games due to the injury and was limited when he did take the field. With a healthy Nunes in the backfield, the Attleboro offense clicked into gear on Thursday.

Senior lineman Kyle Murphy added, “Nobody can stop that kid. I really think he should’ve won Hock MVP because he’s the best running back in the league.”

North Attleboro (9-2) took the early lead on its first possession with an impressive seven-play, 80-yard drive. Sophomore quarterback Chad Peterson hit Kyle Gaumond down the seam on North’s first play from scrimmage for a 44-yard gain into Attleboro territory. Peterson (12-23, 194 yards) capped the drive with the first of his two touchdown passes, hitting Ridge Olsen (five catches, 77 yards) over the middle for 18 yards.

The Rocketeers gifted Attleboro a chance to get back into the game with a short punt that allowed the Bombardiers to start at the North 27. Nunes broke free for a 16 yard sweep and three plays later punched it in from five yards to tie the game.

Another struggle in the punting game gave Attleboro the ball at the North 39 on its next possession. Nunes broke another 16-yard run through the middle and then on the next play Furtado pump faked short and threw the ball to the front corner of the end zone where Nunes made the grab for a 23-yard score. The extra point was wide left and it was 13-7.

“He’s a special athlete,” said Strachan about Nunes. “He’s just gifted. To do what he did – 1,000-yard rusher, Balfour Trophy, bringing Hilda back to Attleboro – I think for me it says everything about the kid. He’s a true leader.”

The mistakes continued for North Attleboro on its next possession. Bobby Mylod fumbled at the Attleboro 44 and Sam Iampierto jumped on it for the Bombardiers.

Attleboro marched down to the North 20 where it faced third and 10 with fewer than 20 seconds remaining. Running behind Kyle Murphy, Furtado (14 carries, 59 yards) took off down the near sideline and broke a tackle at the goal line for a touchdown with five seconds left in the half. The Bombardiers went for a trick play on the conversion with the holder flipping it to Furtado and he found Alex Silva for two.

“I thought in the first half in particular we really hurt ourselves,” said North Attleboro coach Don Johnson. “We weren’t good in the kicking game, so we didn’t have good field position the whole first half and then we made some mistakes.”

The Bombardiers tacked on another touchdown with 3:36 left in the third quarter. Davon Andrade sacked Furtado to force third and 18, but Nunes broke free for a 31-yard gain down to the North two-yard line. On the next play, Furtado faked a sweep to Nunes and walked in untouched for the score.

“He really stepped up,” said Murphy about Furtado, who took over midway through the season. “He has a lot of confidence; he’s a tough kid; and he’s going to make a big difference the next two years.”

North cut the lead to two scores on its next possession, when Peterson hit Gaumond on a fly pattern down the sideline. The 30-yard score made it 28-14, but the momentum only lasted four plays. Furtado and John Burns each gained 19 yards and then Nunes got the edge and broke away for 31 yards and another TD.

“We got a little momentum going but then we throw an interception,” said Johnson, “It seemed like it was one of those days that everything we tried we couldn’t really get going.”

Kyle McCarthy took over under center for North in the fourth quarter. He was 5-5 for 45 yards on his one drive and found Olsen for a 16-yard touchdown. The North receiver pulled in the pass against double coverage.

“I think overall we just got worn down at the end of the season,” said Johnson. “I think we got the most that we could get out of this team and i think we got a little worn down down the stretch.”

After snapping a 20-year drought against its arch-rival in 2008, Attleboro has now won two of the last three Thanksgiving Day match-ups and added a league win against North in 2013.

Strachan played at North Attleboro and has coached the Bombardiers since 2013. He understand the rivalry from both sides and he explained that it has always been about more than just the results on the field.

“This is the community,” he said. “We’re rivals, but at the end of the day we have a tremendous amount of respect for each other and for me that’s the most important thing.”

When asked how it felt to beat North, Nunes, who received the Balfour Trophy as the game’s offensive MVP, responded, “It’s the greatest feeling of my life. I’ll never forget it.” 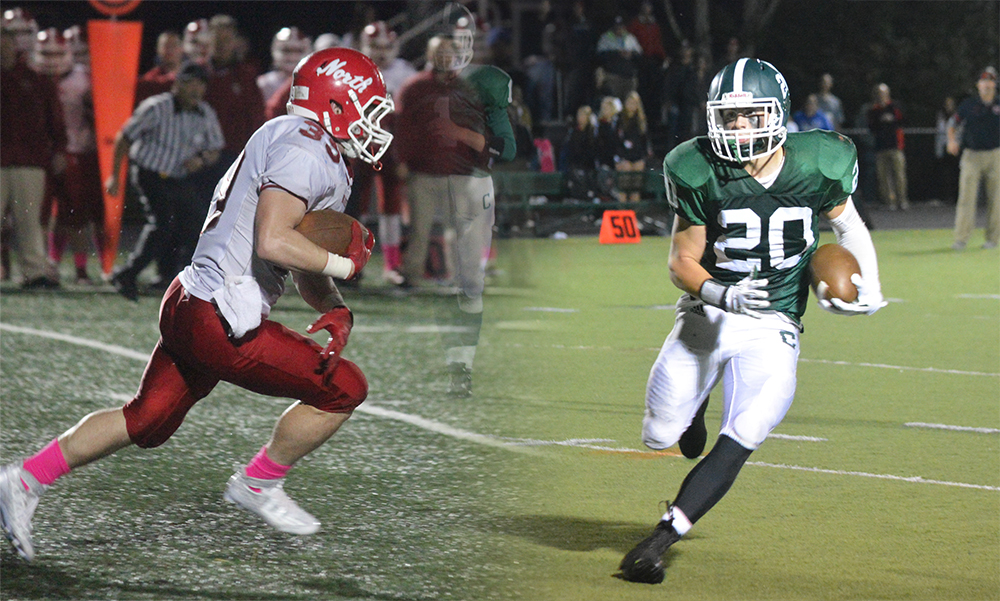 ATTLEBORO, Mass. – Following a week in which it scored 55 points to bring home the Elks Trophy against crosstown rival Bishop Feehan, the Attleboro offense failed to ignite against defending Div. 3 state champion Dartmouth in a non-league game at Tozier-Cassidy Field on Friday night.

The Bombardiers defense did its part, limiting their former Old Colony League rival to just one touchdown and forcing three straight three and outs in the third quarter. But Attleboro turned the ball over four times and only reached the Dartmouth red zone once in the game, as the visitors pulled out a 10-0 win that evened both teams records at 1-1.

“Turnovers, you just can’t do it,” said Attleboro coach Mike Strachan. “Not in these games. It’s so tight, going back and forth, and we get field position then we turn the ball over.”

Attleboro was missing senior running back Brandon Nunes, the HockomockSports.com Player of the Week from week one, who was out with an ankle injury. Nunes accounted for four touchdowns against Feehan.

When asked how much his absence hurt, Strachan responded, “He’s explosive. We have to be able to bounce back from losing a Nunes or a senior leader…I give the credit to Dartmouth; they came to play and they took care of the ball.”

The teams traded punts on their first possessions of the game and Attleboro took over for its second try on offense in Dartmouth territory at the 49. Senior Brian Letourneau, who started in place of Nunes, converted on fourth and one to give Attleboro a first down at the Indians, but on the next play Tyler McGovern was picked off in the end zone by Matt Craig.

Cameron Furtado put a big hit on a Dartmouth receiver to put an end to the next Dartmouth drive and got the ball back on its own 36. Eight plays later, including a 20-yard hook-up between McGovern and senior Alex Silva, the Bombardiers faced second and five from the Dartmouth 11. A no gain by Letourneau was followed by a pair of passes that sailed out the end zone ending the drive.

The Indians took advantage of the Bombardiers failure to score. Dartmouth went on a drive that would eat up the rest of the time in the half as well as 74 yards. The Indians had the ball first and goal from the nine but Sean Donnelly stepped up and made a big play for a seven-yard loss.

On the 17th play of the drive, Dartmouth lined up a 32-yard field goal attempt. The Attleboro coaches called timeout just before the snap and watched as Kyle Sequeira’s kick sailed wide left. After the timeout, Sequeira’s second attempt was right down the middle for a 3-0 lead.

Dartmouth went three and out to start the third, but three plays later and after an Attleboro first down, Sean Smialek ripped the ball out of Letourneau’s hands and raced to the Bombardiers 20. Again, the defense stepped up to force a turnover on downs.

“I thought we bounced back from a week ago where we cleaned up a lot of things that we did,” said Strachan of his team’s defensive effort.

Senior lineman Kyle Murphy was a force on the line of scrimmage and was seemingly in every tackle, while also putting pressure on Dartmouth quarterback Cole Jacobsen. Senior Matt Mahoney also stepped up with big plays in the third quarter.

Strachan added, “I was really happy with the defense. That’s how we’re going to have to play when we hit the Hockomock League next week.”

Attleboro started to move the ball again on its next drive, but on third and two from its own 45, McGovern’s pass into the flat was deflected and intercepted by Craig again. The turnover did not prove costly, as the defense again held Dartmouth to three and out.

“We have to learn from this,” said Strachan. “You can’t turn the ball over and have expectations too high.”

On its first possession of the fourth quarter, Dartmouth took over at its own 19. The Indians would go 81 yards on nine plays to ice the game, highlighted by a 23-yard keeper by Jacobsen who also finished the drive with a three-yard run.

The defense thought it may have kept hope alive for Attleboro in the final few minutes by making one more big stand, but the ensuing punt was muffed and recovered by the Indians to run out the clock.

Attleboro will now turn its sights to Mansfield and the start of Hockomock League play next Friday at home. Strachan knows the challenges continue to grow for the Bombardiers.

“They’re such good programs,” he explained. “It really comes back to practice and getting things into the game plan that we need to execute.”