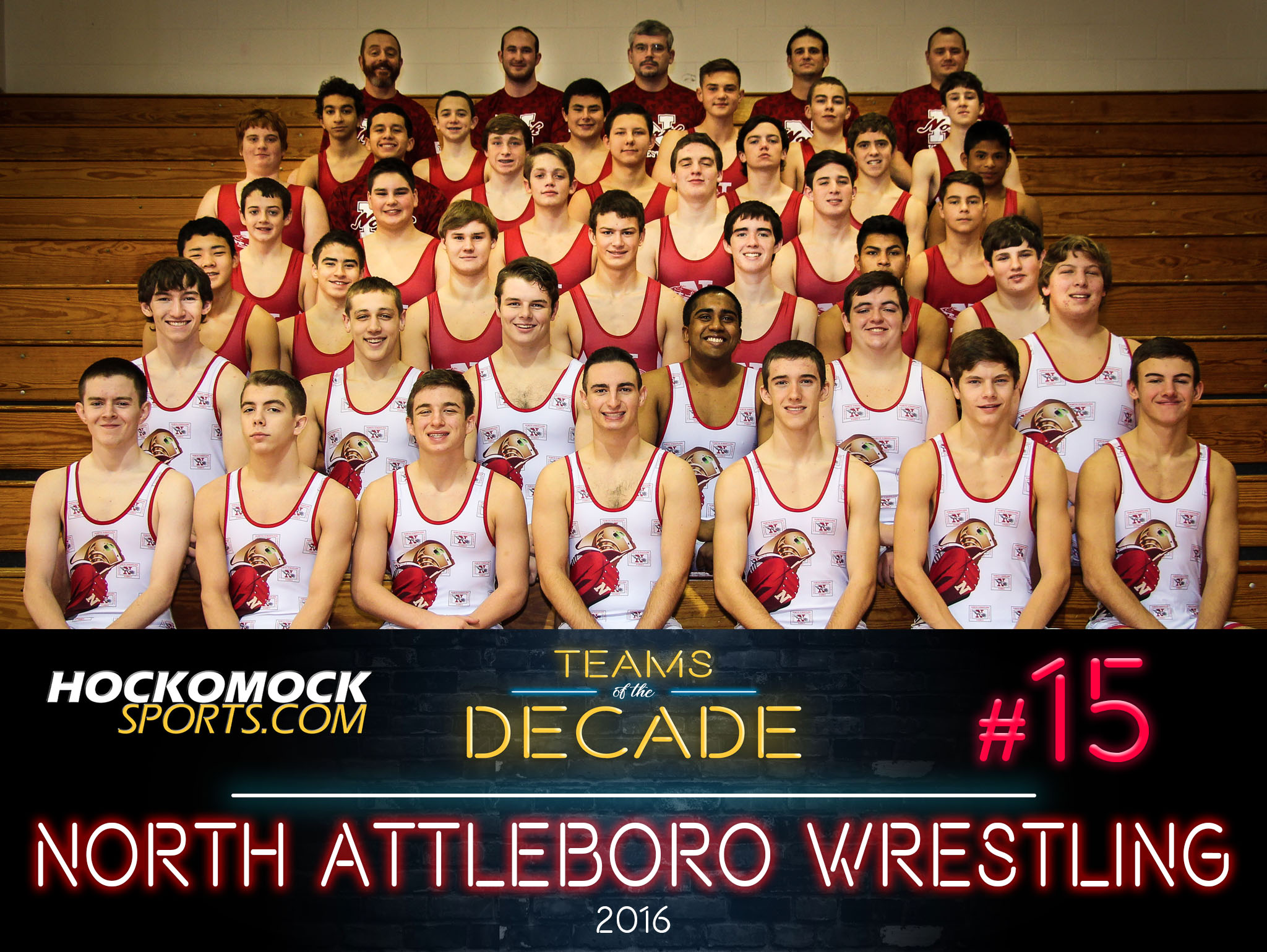 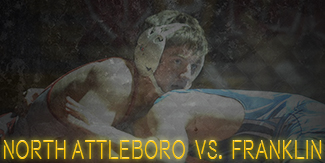 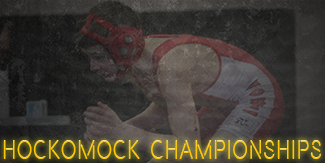 Below are the official Hockomock League Wrestling All Stars, selected by the coaches in the league.

NORTH ATTLEBORO, Mass. – It seems that every season when North Attleboro and Franklin meet on the mats that a league title is on the line. This year’s meeting took on added significance because this will be the last time (at least until divisional breakdowns are reassessed) that the two programs will be fighting for the league championship.

With North switching to the Davenport next year, the matchup will still pit two of the Hockomock’s top programs but there will not be a trophy on the line.

North Attleboro took the bragging rights and clinched at least a share of the Kelley-Rex title on Wednesday night in the Kenneth Pickering Gym. The Rocketeers got off to a fast start, leading at one point 30-0, and closed out a 42-21 win over the Panthers.

He added, “Being prepared for Franklin is always the toughest match of the year regardless of the quality level of either team. Not that I’m a football guy, but I always think of the Patriots and the Jets. It doesn’t matter how bad the Jets are you know it’s going to be a really tough game.”

The Rocketeers started with back-to-back wins by brothers Mike and Nick Gould. Mike, who was wrestling on senior night, got North in front with a 7-2 victory over Dylan MacLean and Nick, a junior, followed that up with a pin of Seamus Cogavin with 59 seconds left in the first period.

Griffin said, “They’re a special family of kids, all three (Zach is a sophomore wrestler) of them. Our team captain stepped up to the plate and did  the things he was supposed to do.”

North had the early momentum and started to roll. Collin Fiske added three points with a 9-2 win at 152 pounds, then three straight pins gave the Rocketeers a commanding 30-0 lead. Jordan Tillinghast (160) and Jack Donohue (170) both picked up pins in the third period and senior Nick Morrison (182) grabbed a pin with 1:01 left in the second.

Franklin coach Carmine Colace knew that his young squad would be tested on Wednesdsay, but was pleased with the effort of his wrestlers to make North work for its points.

He explained, “We had a 182 (Myles Polito) that fought really hard, he’s a freshman, a first-year kid and he fought really hard. The kid we had at 160 (Tom Smith) has been a backup all season. They battled for two of three periods and I didn’t expect that.”

Although North had a big lead, nothing had been decided, as Franklin had potential points waiting in the lower weight classes.

“Wrestling is a little more complicated than just what you see on the scoreboard,” said Griffin. “It’s all about match-ups and it’s about where you start.”

Evan Herandez got the Panthers on the board at 195 pounds, pinning Brad White with 43 seconds left in the second period. John Miller cut the lead to 30-9 with a 5-0 win over Leo Thibault at 220, but North was handed six more points with no Panther to wrestle at heavyweight.

The meet was not over as it headed to 106 and Jordan Carlucci gave the Panthers a little hope of a comeback when he picked up a quick pin just 35 seconds into his match. Mike Rocca followed up with a 4-0 win at 113, but Jake Direnzo did a solid job of avoiding a big loss or a pin guaranteeing North at least a tie.

At 120, North turned to senior Devin Spratt and he came through with a fairly comfortable 10-3 victory over T.J. Remillard  to secure the win for his team. Earlier this season, Spratt became the 11th Rocketeer to reach the 100-win plateau and is now closing in on 110 for his career, which would move him into the top five all-time.

“It feels good,” said Spratt after the meet. “They’re always a tough match. We’ve lost pretty bad to them before, so it feels pretty good.”

When asked how it felt to get to 100 wins, he replied, “It feels like my hard work is paying off.” He continued, “Right now I think we’re on course to win the D2 state title, if everyone wrestles to their full capabilities.”

Nick Narducci beat Alex Devitto 6-2 at 126 and in the final match of the night at 132, North’s Anthony Biaungo and Franklin’s Amir Zamani saved the best for last.

Zamani led 4-0 after two periods and was ahead 5-2 in the third, but Biaungo got a point for an escape and then as time was winding down he took a chance to go for the takedown. Biaungo managed to get the two points with mere seconds to spare, although the Franklin coaches insisted that the wrestlers were out of bounds. In overtime, Biaungo wasted no time to get a reversal for a 7-5 win.

“Anthony Biaungo, he had that momentum going into his match and it helped in his overtime,” said Griffin. “Those things kind of came our way.”

Colace said, “I knew what we were getting into. We just got out-muscled tonight. They’re really well drilled and it’s the best team I’ve seen out of here in a long, long time…maybe they’ll finally win the big one.”

Today’s games are listed below.
Hockey
King Philip, 7 @ Attleboro, 6 – Final – Jacob Kelly had a hat trick for the Warriors in the victory. Sam Larkin scored a goal and had two assists for the Bombardiers.
Canton, 0 @ Medway, 2 – Final – Justin Slocum made 25 saves in net for the Bulldogs.
Foxboro, 2 @ Milford, 1 – Final

Today’s games are listed below.
Hockey
Attleboro, 3 @ Taunton, 9 – Final – Tyler Pietrzyk scored four goals and had two assists to power the Tigers to the win. Eighth grader Koby Souza also chipped in with a goal in the third period for Taunton. P.J. Elliott and Jake Parker each scored for the Bombardiers.

Happy New Year! Today’s games are listed below.
Hockey
Attleboro, 6 @ Dighton-Rehoboth/Seekonk, 0 – Final – Keagin Larkin scored a hat trick and added an assists while PJ Elliott had a pair of goals and a pair of assists. Cam Littig scored his first career goal. Evan Andrews made 22 saves in net for the shutout.
Mansfield, 1 @ Canton, 3 – Final – Jackson Maffeo, Matt Lazaro and Bobby Mullaney scored for the Bulldogs while Matt Farragher (from Max Hoffman) scored a first period goal for the Hornets.
King Philip, 8 @ Foxboro, 1 – Final