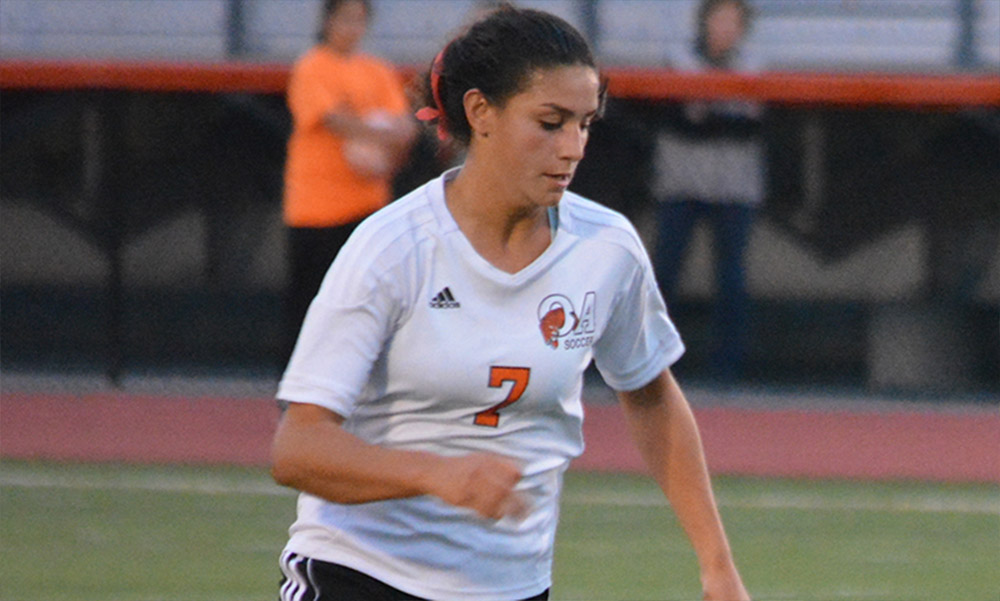 Below are the official Hockomock League Girls Soccer All Stars, selected by the coaches in the league.

Below are the official Hockomock League Girls Soccer All Stars, selected by the coaches in the league.

WELLESLEY, Mass. – Just two seasons ago, the Taunton girls’ soccer program won a single game. Last year, the Tigers improved to six wins and on Wednesday afternoon at Sprague Field the program made history when it kicked off against Wellesley in its first ever state tournament game.

Thanks to a brace from sophomore Samantha Tichelaar and a goal and an assist from senior Alana Vincent, the Tigers continued their historic run with a 3-1 victory in the preliminary round of the Div. 1 South sectional.

“For the seniors, we’ve all been playing with this program for five years,” said senior goalie Kayla Wentworth, “so it’s kind of crazy. I’m proud of my team for working so hard.

She added, “It just shows how hard work pays off.”

Taunton coach Edith Dixon also remarked on the work that the players have put in over the past two years to not only be competitive with the top teams in the Hockomock but also to now have success in the state tournament.

“On one side it’s great that we’re moving forward and we’re progressing with our talent and all that,” she explained, “but the bigger picture is that these girls are being rewarded for all the work that they’ve put in.”

“They’ve worked their tail off over the summer and the early part of fall and they’re seeing reward for the work that they put in, which is all the life lesson you can ask for.”

If the Tigers had any nerves stepping into their first postseason game, they did not show any in the early going. Abby Small forced an earl save with a curled free kick from the edge of the box and Vincent nearly opened the scoring when she ran onto a flicked header by Tichelaar and had her shot deflect narrowly wide.

In the 12th minute, Taunton got the lead. Vincent played a corner from the near sideline that curled to the back post where Tichelaar was on hand to knock it in with her knee.

“It’s really important to get their confidence up, keep moving forward and really get the momentum started and to establish that the other team is going to have to chase us,” said Dixon about the opening goal.

The Raiders started to get into the game with Kayleigh Harris having the home team’s first chance on a corner but she skied the loose ball over the bar. Shortly after, the Raiders took a timeout midway through the first half to settle things down.

Taunton nearly doubled it’s lead just minutes after the timeout, but Small’s dipping free kick hit the underside of the bar and the officials ruled that it did not cross the goal line. The ball bounced to Tichelaar but her header went wide of the far post.

The miss hurt as the Raiders almost immediately equalized. A Wellesley counterattack caught the Tigers back line square and Emmaline Ivey ran onto a ball over the top and was one-on-one with Wentworth. Ivey took a couple touches before firing a shot into the side-netting.

The goal slowed the Tigers attack for a few minutes but Taunton recovered and once again started to put pressure on the Raiders defense with quick outlet passes into Mariah O’Gara, Vincent and Tichelaar.

Five minutes before the break Vincent ran onto a through ball in the right channel and carried the ball towards the byline. From a very acute angle, the Tigers leading scorer fired a shot through the Wellesley keeper and inside the far post to make it 2-1.

“Once they did score…we didn’t turtle up,” said Dixon. “We kept moving forward and when we did get ahead by one they kept pushing.”

“This was a great big character win for the team across the board and I’m really proud of them right now.”

Even with Small hobbled and forced to stalk the sidelines with a giant bag of ice on her knee, Taunton came out strong in the second half. Just nine minutes after the break, Maggie Sullivan took a shot from distance that bounced up and over the Wellesley keeper. Tichelaar read the bounce and was first to the loose ball for her second goal and a two-goal advantage for the Tigers.

“Ugly goals count just as much as pretty goals, so I’ll take it,” joked Dixon.

Wentworth was nearly beaten by a similar bounce just minutes later as she stared into the sun trying to read a free kick by Lucy Acuna. Luckily for the Tigers, the ball bounced up off the bar and out.

The game was physical throughout with neither team backing down. Wentworth would make six saves but the Taunton defense, led by senior Emily Serpa, kept chances to a minimum to run out the clock on a historic win for the program.

Now, the Tigers (9-8-3) can turn their sights to facing No. 1 seed Bishop Feehan on Friday. The Tigers seem ready to go and looking forward to the challenge.

“The phrase we’re using right is playing with house money,” said Dixon. “Yes Feehan is great, but we’re pretty stinking good too. We’re going to give them a tough game. It’s not going to be a rollover; they’re going to have to work for it.”

Wentworth added, “I know that no matter what team we play that we can hang with them. We won’t go down without a fight; we’ll keep going.”