Below are the official Hockomock League Hockey All Stars, selected by the coaches in the league. 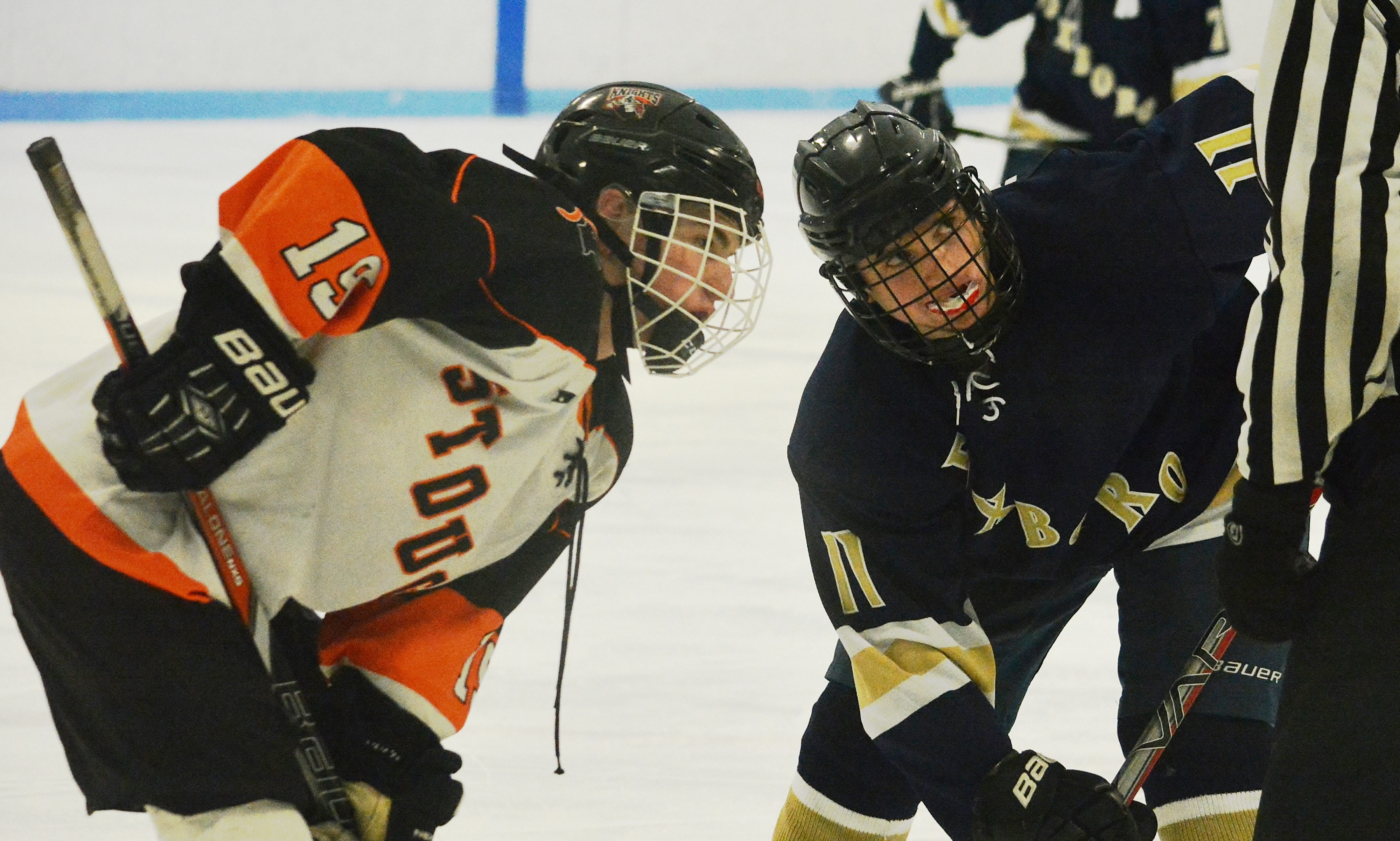 BROCKTON, Mass. – Even though it was just the second period of the first game of the year, there were some positive takeaways for Stoughton.

After the Black Knights extended their lead to two goals with 6:19 to play in the middle period, Milford responded within 30 seconds to grab the momentum and cut the deficit to one.

But this year’s Stoughton showed resiliency, battling to gain the momentum back, scoring the all important next goal in the final two minutes of the second period and taking care of business in the third period to open the season with a 5-1 win over the Scarlet Hawks.

“That was huge,” Stoughton head coach Dan Mark said of the late second period goal. “In past years, we’ve fallen apart. We’ve been up two goals, like against Attleboro and Foxboro last year, and normally we fall apart. We didn’t fall apart and I thought our guys played hard.”

Despite a 13-6 advantage in shots and two big chances, the Black Knights headed to the locker room in scoreless tie at the first intermission. Milford’s Jonathan Chase made a nice move just 90 seconds into the game but his bid at the near post was stuffed by Stoughton freshman goalie AJ Scott (16 saves).

The Black Knights had two chances back to back in one sequence but Milford goalie Brian Ireland (30 saves) came up big both times. First Ireland got his pad down for a kick save on chance from Jon Lessa and then after the puck cycled around, Lessa had a open wrist shot right in the slot but Ireland got the handle of his stick in the way to push it over.

“He’s very good, he had a lot of shots against him and played well,” Mark said of Ireland. “Their whole Milford team played really hard, I give them a lot of credit.”

It didn’t take long for Stoughton to take the lead in the second period, finding the back of the net just over two minutes into the period. Senior captain Mark Sheehan picked up possession in the corner, skated towards the front of goal and tucked it in past Ireland to make it 1-0.

Stoughton doubled its lead with 6:19 left when Lessa found junior Ryan Chipman out in front for the one timer.

That’s when Milford snatched the momentum back. Just 22 seconds later, Milford’s RJ Stansbury centered a pass that eighth grader Griffin Burns hit one time to find the back of the net to make it 2-1.

From there, the Black Knights were able to overcome any push from Milford and with with 1:49 left, Stoughton freshman Carter Gerome notched his first career goal right in front to get the two goal cushion back. Since the Scarlet Hawks only had nine skaters, Stoughton knew the third period would be a time to use their skating to push the pace.

“We told the kids to keep playing hard until the end,” Mark said. “We actually had a couple captains speak up because they’ve experienced [losing the lead] before. They spoke up in the locker room to push in the third period.”

To seal the deal, Stoughton’s Sheehan sent in a centering pass less than a minute into the third period that deflected off a skate and in, leaving no chance for Ireland. Lessa added a fifth goal right in front off a feed from Donnie Foley with 6:17 left in the third.

“It’s going to be a learning process trying to figure out if we can move guys from defense to forward and double shift and things like that,” Milford head coach Mike Balzarini said. “As far as the nine skaters we had, I thought we did a good job and the kids never gave up. Even when we were down in the third period the kids didn’t give up. As far as the effort I’ve very pleased. There’s always room for improvement, even with just nine guys.

Stoughton (1-0) matches its win total from last year and will try to make it two when they travel to Stoughton on Monday night. Milford (0-1) will look to break into the win column on Wednesday when they host Attleboro.