Below are the official Hockomock League Boys Indoor Track All Stars.

MILTON, Mass. – Stoughton did not play particularly well in the opening half, but at the break trailed by only six points on the road at top seed Milton. One defensive stand to start the third quarter and suddenly momentum was on the visiting sideline.

But the Wildcats (9-0) got to the top seed in Div. 3 Southwest by being resilient and they bounced back with a series of big plays and 20 unanswered points to take control in the fourth quarter of a 38-21 victory.

It was the second straight season that Stoughton (5-4) had been knocked out in the semifinals.

“I thought we did okay,” said Stoughton coach Greg Burke. “We lost a couple of our guys…but the kids hung in their pretty good.”

“I’m not happy at the score…but the kids played hard.”

Milton quarterback Mike Fallon scored a pair of first half touchdowns. One came on an 18-yard keeper and the second on a scramble off a broken play after Stoughton’s blitz flushed him from the pocket. Fallon raced to the wide side of the field and then spun off several tacklers who were left lying on the ground or with arms outstretched wondering what happened.

“We tried to put pressure on him,” said Burke. “We chased him a little bit, but he made big plays himself.”

Struggling to get much going, Stoughton finally found some offense in the final three minutes of the half. Jake Gibb hit Izon Swain Price on a swing pass for a 17-yard gain and Jordan Taylor got another 10 up the middle to give the Black Knights a first down at the Milton 38.

Two plays later, Gibb stepped up into the face of the Milton pass rush and hit Jack Connelly on a crossing route that the junior turned upfield for a 36-yard score cutting the lead to just 12-6.

On the opening series of the third quarter, Stoughton got energy from its defense when it stuffed Milton on fourth and one from the 45.

The Black Knights turned to the ground game. Swain Price carried four times for 29 yards on the left side with Taylor leading the way as his blocker. With the ball down to the Milton eight, Ryan Sullivan took a carry to the left edge and ensured that he would get the touchdown by lowering his shoulder and running over the Wildcats cornerback on the goal line.

Burke said, “We did pretty good on the run. We battled pretty good, so I’m happy there. I was happy with the effort.”

About going for it on fourth and one, Milton coach Steve Dembowski remarked, “I considered punting on the fourth and one at midfield but when you’re in games like this you have to make those plays. I was disappointed that we didn’t make the read on that and get the first down.”

He was not going to be disappointed for long. David Perkins returned the ensuing kickoff 50 yards all the way to the Stoughton 34. Milton finished the short drive with a Mack Feeney two-yard run to regain the lead.

Nick Hardy returned the kick 41 yards and the Black Knights started in Milton territory down 18-13. Using play action and a fake to the bubble screen, Gibb picked out Sullivan racing down the seam for 30 yards and into the red zone. Three plays later and Perkins struck again with an interception of a tipped pass.

The Wildcats needed only two plays to go 80 yards. Fallon hit Derek Perkins on a 67-yard deep route down the middle and put the Wildcats up by two scores.

“They picked one off on us at 18-13 and then we didn’t cover one down the middle, a play that we’ve gone over 500 times,” explained Burke. “You have to cover the kid and he split our two safeties.”

It only got worse for Stoughton. Following a punt, Milton went 68 yards in two plays to give themselves a cushion. This time Fallon hit David Perkins on a receiver screen and he raced past the defense for 68 yards and touchdown.

Stoughton continued to battle and would put together a 12-play, 62-yard scoring drive on its next possession to cut the lead to 32-21. Swain Price capped the drive with a one-yard run and Dave Cellucci came in to get the conversion on a keeper.

Any hopes of a comeback were dashed when Koby Osazee went 20 yards straight up the middle to score with 53.8 remaining. 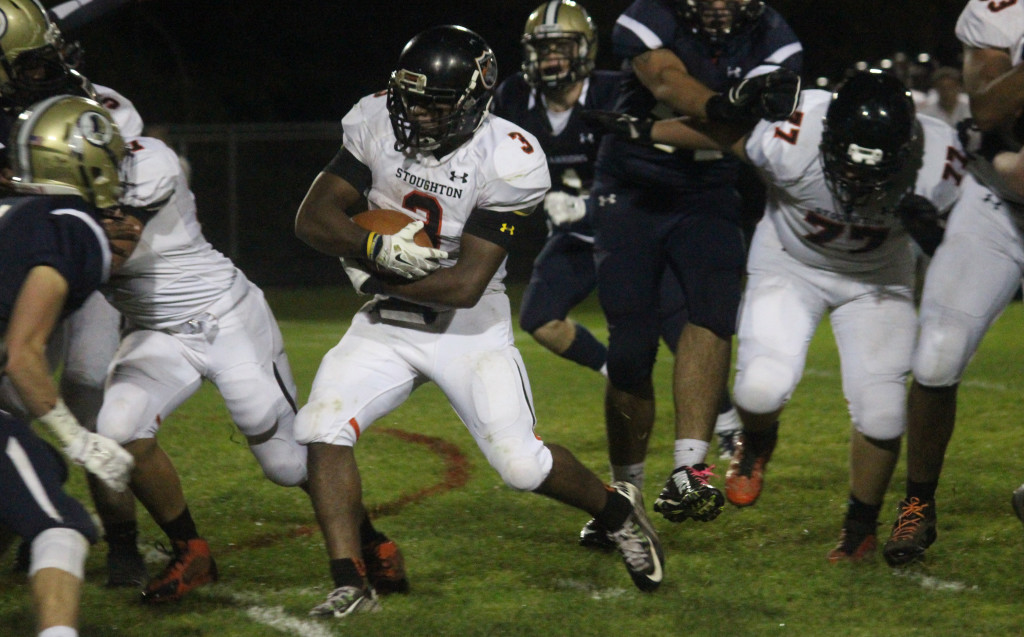 Franklin @ North Attleboro – Postponed to 10/3 at 4:00
Boys Soccer
North Attleboro, 0 @ Attleboro, 3 – Final – Zach Rodrigues scored once in the first half and then again in the second half to pace the Bombardiers over rival North. Junior Coca also scored a first half goal for Attleboro.

Franklin, 2 @ King Philip, 0 – Final – Hatim Brahimi put the visitors in front off an assist from Brian Czuba and Franklin took a 1-0 lead into the break. Senior Nick Parent then iced the game with a late goal in the second half off an assist from senior Austin Kent.

Taunton, 1 @ Mansfield, 4 – Final – Five minutes into the game, sophomore Sean Lanzillo put the hosts on the board off an assist from Jack Rielly. Just over 15 minutes later, senior Jared Miller doubled the lead for the Hornets off an assist from Charlie Rogers to take a 2-0 lead into the break. Five minutes into the second half, Lanzillo set up Rogers for Mansfield’s third goal and just 10 mintues later Brendan Sullivan finished off a pass from Jareme DiLoranzo to make it 4-0. Austin Botelho scored a late goal for Taunton.

Taunton, 0 @ Mansfield, 2 – Final – Jackie Carchedi had a goal and an assist for the Hornets. Jen Kemp had the second goal and Emily Gaumond made four saves to record her fifth shutout of the season.

Franklin, 3 @ King Philip, 1 – Final – The Panthers picked up a key Kelley-Rex win with scores of 28-26, 26-24, 19-25, 25-21. Dayna McCue had 30 digs and four aces, Aubrie Kutil and Beth Neal each had 10 kills while Kutil added an ace and Neal had a pair of aces and blocks and 13 assists. Franklin Head coach Kate Horsmann said Caroline Maguire had a huge role defensively at the net with four blocks and three kills. For King Philip, Josie Rowean led the team in attacks and had six service points in game one, Gwen Uyrus added seven service points in game two, Emma Lopez had eight service points in game three, and Amanda Loewen had five digs.

Taunton, 3 @ Mansfield, 2 – Final – In a back and forth affair, Taunton snapped its three game skid with a 11-25, 29-27, 25-20, 16-25, 15-12 win. Tatum Speicher wa the catalyst for the offense with 39 assists, six digs and three kills. Molly Sullivan had 29 serve receives and 16 digs while Meghan Navarro solidified the back row with 15 digs and three aces. Mansfield sophomore Meg Hill had 13 hills, Juliana Newell added eight kills and Jess Haradon had 17 digs.

Canton, 171 @ Franklin, 180 – Final – Canton sophomore Jack Goyetch was the match medalist, shooting a 40 for the day. Bryan Woelfel shot a 43 for the Panthers.