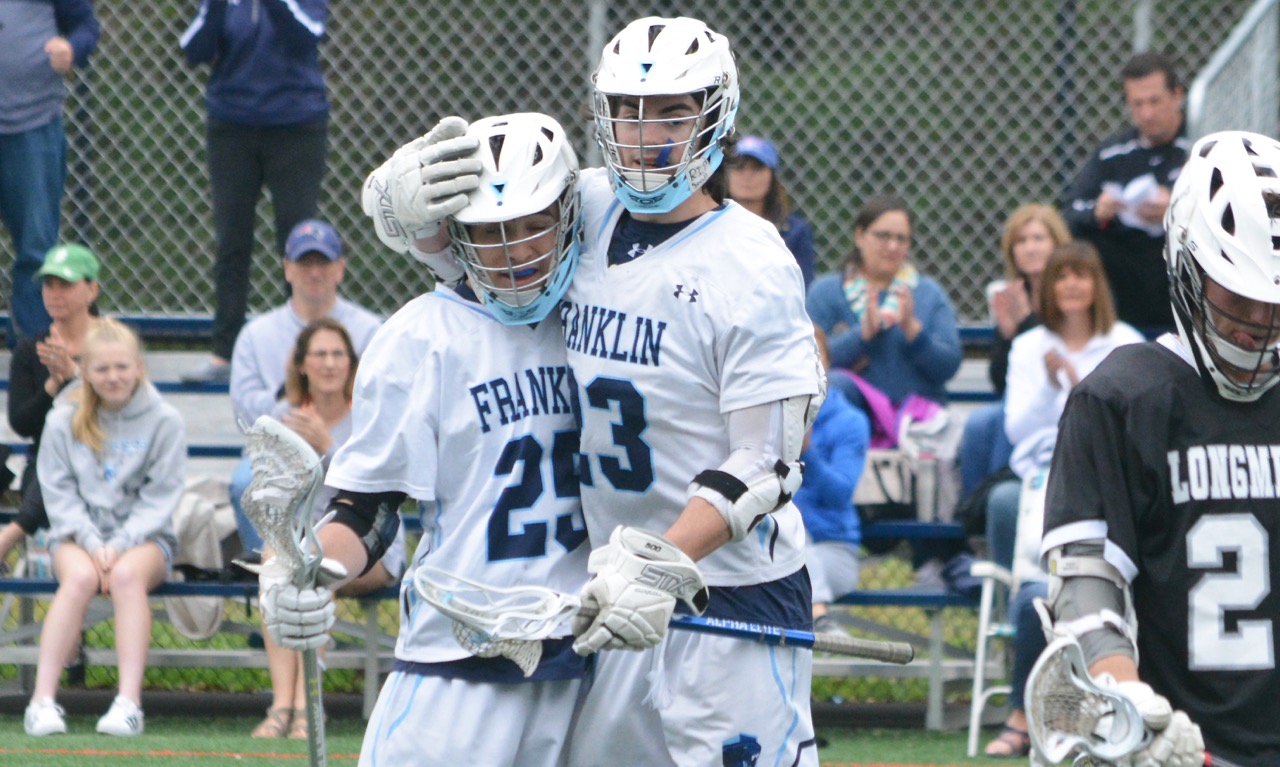 Click here for a photo gallery from Franklin vs. Longmeadow boys lacrosse at Beaver St. Field, 5-6-18.

Although it had been a running clock throughout the fourth quarter, there was still just enough time for a little history. In the final minute of a game that had long been decided, Franklin raced the ball up the right wing and immediately looked to find senior attacker Eric Civetti. He got it outside the crease on the left side and drove to the cage.

This wasn’t about the Panthers trying to run up the score, but to give the program’s all-time leading scorer the opportunity to set another record with his ninth goal of the game. Twice, Civetti had tied the record with eight in a game, but now he stands alone.

Even more important for Franklin was that the nine goals were part of a dominating 22-8 victory on Sunday afternoon against Longmeadow, one of the top-ranked teams in the state. This was the third time this week that the Panthers had scored 20-plus goals in a game. The first two were against a pair of the state’s newest programs (Taunton and Stoughton) and on Sunday it came against one of the state’s best.

“I was so afraid of this because of those two games and I’m just amazed,” said Franklin coach Lou Verrochi. “I’m blown away by the fact that we beat them the way we did. All the stars were aligned. It was just an incredible win. The kids played their butts off.”

The spotlight was rightfully on Civetti after the game. He scored four times in the opening quarter, as the Panthers jumped out to an 8-0 lead, and had seven goals by halftime, including his by now trademark around-the-defender’s-shoulder, no-look shot while backed up on the edge of the crease. He scored again to start the second half and then finished the game with one last goal in the closing seconds for the record.

“I didn’t think we were really going to get much of a chance at the end of the game,” Civetti said of the ninth goal, “but I’ve got great teammates and they always give me great opportunities to score.”

He added, “We were prepared. We knew we had to come out fast and that’s exactly what we did. The beginning of the year, we had a few problems on offense we had to work out. I think today was one of those games where we really built our confidence. We made sure we knew we can play with teams like this.”

Verrochi said of Civetti, “He can create his own offense. He’s been able to do it for four years now. He’s just an outstanding player and to do it against them was huge because defensively I thought they were very good, he just had a great game. He gets up for big games like this.”

It had been a difficult start to the season for the Panthers outside of league play. While Franklin is on the brink of another Kelley-Rex division title, the Panthers had struggled offensively against non-league opponents like BC High and Walpole and were in need of a marquee win on their resume.

Junior goalie Connor O’Rourke said, “We schedule a tough out of league schedule and we look to get better off those games. We saw they were No. 6 in the state and we just had a lot of motivation to get up there after we dropped in the rankings a few weeks ago. We’re really excited.”

While the offense will get the plaudits, the Franklin defense also stood tall against the powerful Longmeadow attack, Jack McGrath was tenacious with his close marking and O’Rourke made 14 saves, consistently coming up with big stops to stem the Lancers’ momentum and with accurate outlet passes that got the Panthers going in transition.

“He was solid,” said Verocchi of O’Rourke. “He always is. He deserves some All-American recognition.”

Civetti opened the scoring five minutes into the game and, following one of O’Rourke’s big saves, he then made a perfect pass from behind the cage to set up Zach Alexander in front. Chase Tanner rifled in Franklin’s third and Civetti spun a defender into the ground before finishing in close.

The Panthers were rolling and turned a big stick check from Trevor Raffin into a transition opportunity. LSM Patrick Morrison and Jake Davis played a give-and-go that left Morrison open for the fifth goal. Freshman Matt Lazzaro got his first with a rip to the corner, Civetti cleaned up the rebound of a Tanner shot, and then Civetti was given all day to wind up and fire.

Longmeadow scored at the buzzer to close out the first quarter but it was already 8-1.

“I think this was our best game offensively,” said Civetti. “We finally got clicking. It’s nice because you don’t have to rely on one-on-one. Whether it’s middie or attack, we’re all clicking.”

Jacob Alexander had controlled the face-off ‘X’ against one of the state’s premier face-off guys, but the Lancers started to win a few in the second quarter and started to cut into the lead. Civetti made it 9-1 but the visitors scored back-to-back goals before Tanner went low angle with a shot from distance through a crowd of legs. Civetti would score twice more before the half but the Lancers scored three and it was 12-6 at the break.

The thought of a comeback was ended in the first three minutes of the third quarter. O’Rourke intercepted a long pass and quickly started Franklin’s break with Davis feeding Civetti for his seventh of the afternoon. Nitin Chaudhury scored with a bouncing shot after racing straight down the middle of the field and 17 seconds later Jacob Alexander finished off a quick break from Sean Lazzaro’s pass.

After a pair of huge saves from O’Rourke while Longmeadow was man-up, Chaudhury set up Will Harvey for a goal and a 16-7 lead. Civetti again played provider on the next goal, picking out a cutting Matt Lazarro, who took the pass on the run and in one motion went behind his back to the top corner.

Davis tacked on two more, including a missile to the top corner at the buzzer and Franklin went into the final quarter with a 19-7 lead. Kyle McEniry (from Chaudhury) and another rocket from Davis (three goals and four assists) pushed the Panthers’ lead to as many as 14 (21-7).

“We put a few new things in and geez it worked to perfection,” said Verrochi. “In my wildest dreams I wouldn’t have expected to beat Longmeadow the way we did. To have running time in the fourth quarter against Longmeadow, I don’t think that’s ever happened.”

Franklin (11-2, 9-0) will get back into league play on Wednesday night against Oliver Ames and can clinch at least a share of a sixth straight Kelley-Rex division title.