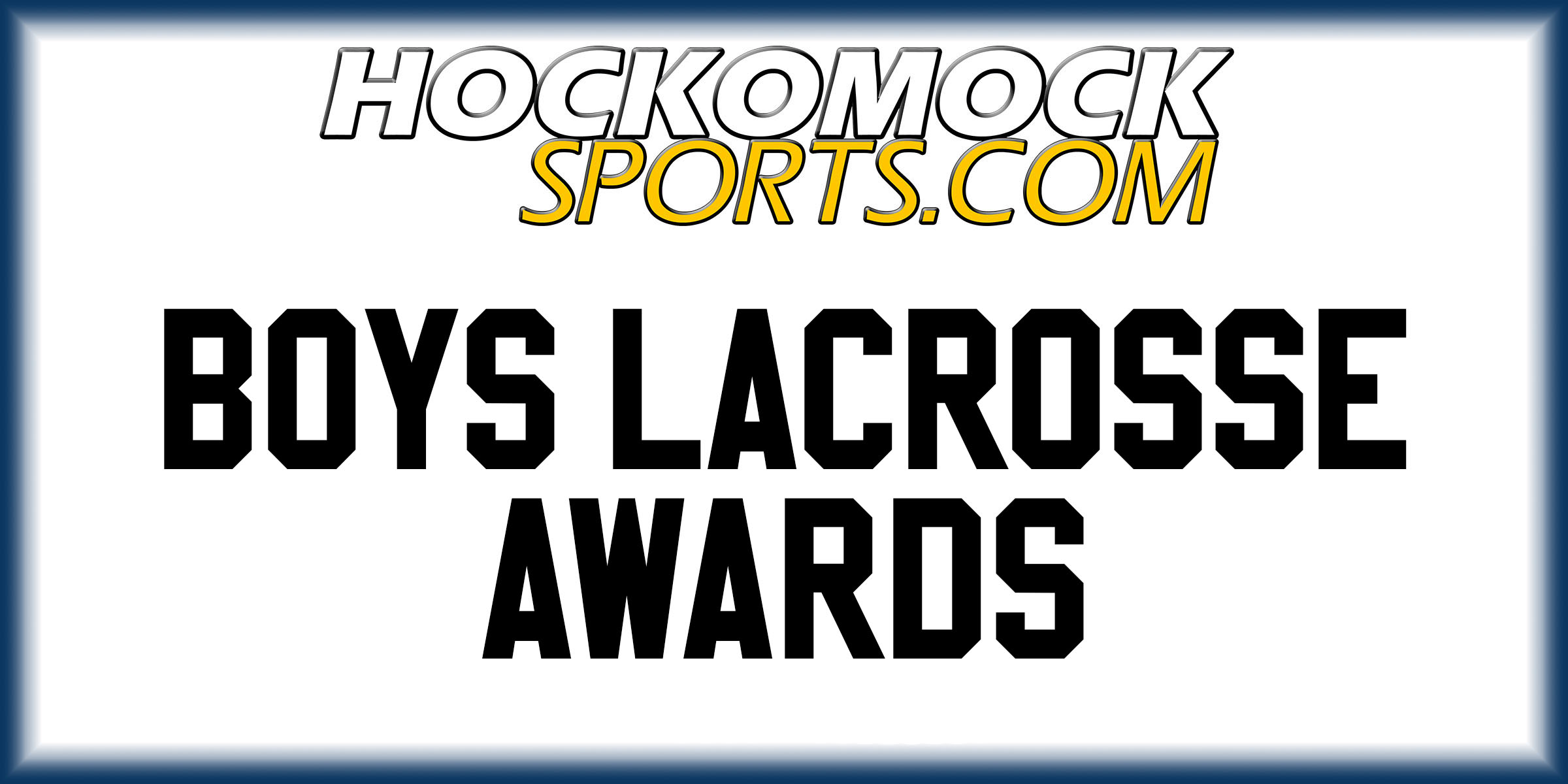 Below are the official 2022 Hockomock League Boys Lacrosse All Stars, selected by the coaches in the league. 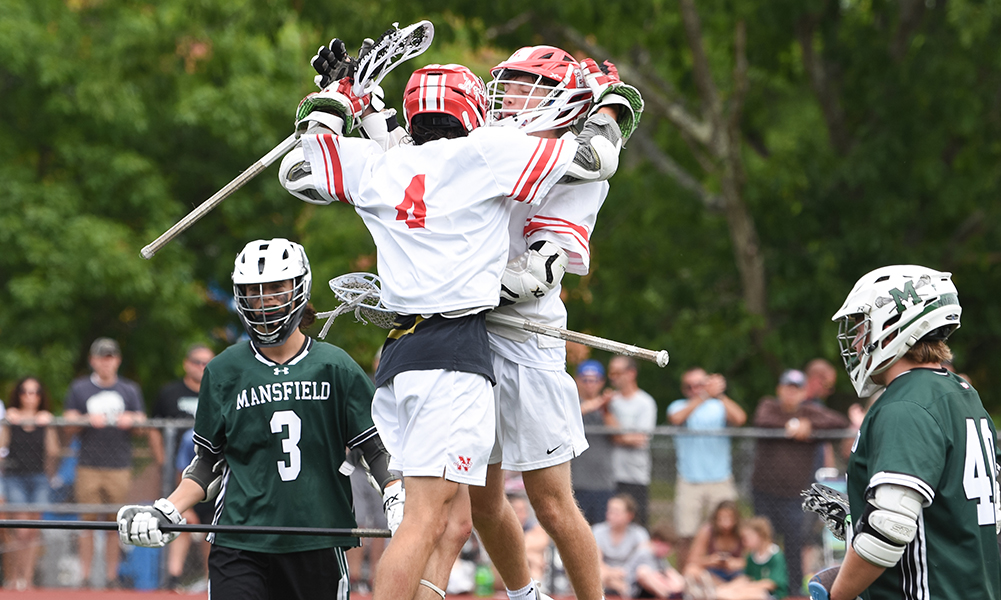 Click here for a Photo Gallery from North Attleboro vs. Mansfield boys lacrosse from Beaupre Field in the Div. 2 Round of 16, 6-11-22. 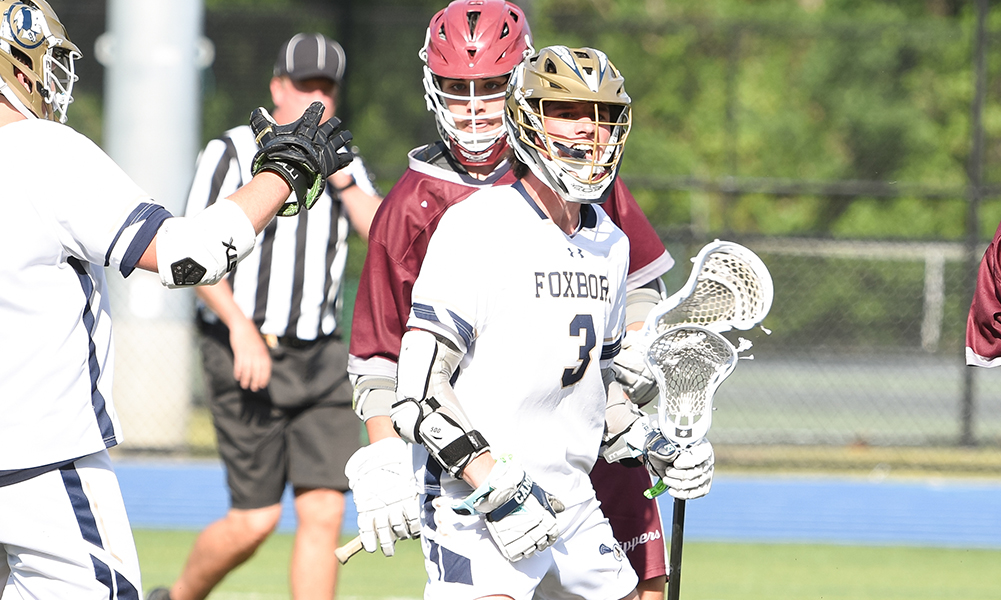 Click here for a Photo Gallery from Foxboro vs. Falmouth boys lacrosse at Sam Berns Community Field in Div. 3 Round of 16, 6-10-22.

FOXBORO, Mass. – Just 30 seconds into the third quarter of Friday afternoon’s Div. 3 Round of 16 game at Sam Berns Community Field, Falmouth junior Rafe Grant managed to escape a triple team, drove across the center of the Foxboro defense, and managed to squeeze a shot past goalie Adam Addeche.

The goal extended the Clippers’ run to four straight and cut the Foxboro lead down to just one. Momentum seemed to be with the visitors, but before the face-off the officials conducted a stick check, ruled that Grant’s stick was illegal, and not only took the goal off the board but also gave Foxboro a two-minute, man-up opportunity.

Connor Noone took advantage of the extra space to score his second goal of the day. Instead of a one-goal game, Foxboro led by three and took back control. The Warriors would tack on three more in the quarter to push the lead to as many as six and held on in the fourth to secure an 11-7 win and a spot in the last eight.

“I’m proud of the boys, great win for us today,” said Foxboro coach Matt Noone, who also welcomed the Warriors playing in Div. 3 for the first time this spring. “It’s nice to go on a little run.”

Foxboro got off to a perfect start, jumping out to an early 4-0 lead. Noone got things started after a couple of minutes, able to get his hands free for a lefty rip. Three minutes later, Tommy Sharkey broke free and found the bottom corner from distance to double the lead. On a man-up, Sharkey went across the crease with a pass to Jack Avery at the back post to make it 3-0.

Less than a minute later, Foxboro added its fourth with a quick transition that started with a perfect Addeche outlet pass to pole Dylan Kerrigan, who raced down the sideline before picking out freshman Jon Sacchetti for a close-range finish.

The lead could’ve been more but Falmouth goalie Chris Ledwick (19 saves) came up with huge stops to deny Sacchetti and Lincoln Moore. The Clippers made the stops count by getting on the board when Matt Shea found the back of the net with a minute to go in the first.

Foxboro responded early in the second. Sacchetti was able to cut through the Falmouth defense and despite taking a hit was able to bury the shot. Another two-man advantage turned into a five-goal lead for the Warriors, as Sharkey had plenty of time to line up a sidearm shot for his second.

Although the hosts seemed to have the game in hand, mistakes and penalties allowed the Clippers to creep back into the game.

“Offensively, I thought we pressed,” Noone explained. “We weren’t valuing possession of the ball and so I asked the kids, can we get a long possession? The way you’re going to beat teams that you shouldn’t beat is to possess the ball longer, so we’ve been trying to work on that.”

A bad pass in transition gifted Oliver Partridge a free run at Addeche and he made no mistake to cut the lead to 6-2. Shea was able to turn the corner and and went high past the stick of Addeche to make it a three-goal game. Jackson Falcone nearly made a two-man advantage count only to have Addeche come up with a huge stop with his mask.

With 2:16 left in the half, Falmouth got back within two. After a turnover Cooper Young fired a pass across the middle. Addeche gambled for the steal, but the ball made it through to Kevin Coyne for a finish into the open goal.

“Penalties killed us, we let them get back in it,” Noone said. “Being in the penalty box…now we’re in the playoffs man, sometimes during the season you can get away with that but the deeper you go in the playoffs, if you’re a man down most teams are going to be able to score.”

It looked like things had gone from bad to worse for the Warriors after Falmouth won the opening draw of the second half, but the goal was wiped away and Noone restored a three-goal cushion.

Foxboro then got back to what had worked so well in the first quarter. Sharkey was denied by Ledwick while taking a big hit, but Foxboro retained possession and Moore went right back to Sharkey for his hat trick goal.

Three minutes later, Addeche had another long outlet to Kerrigan, who pulled in the pass with a nifty over-the-shoulder catch, and it was finished by Noone in the middle. Sharkey would add his fourth of the day with a man-up goal and the Warriors went into the fourth leading 10-4.

“Tommy was great,” Noone said. “Sacchetti, our freshman, played great. What’s great about the attack is that if someone has an off day then someone will pick them up. So, when they shut off Connor, then Linc picks it up and, if Lincoln is having an off day, then Sacchetti is there.”

Falmouth kept battling back. Max April went top shelf on the run just 30 seconds into the quarter and the Clippers forced a turnover on the ride to give Grant a wide open chance and cut the lead to four.

Noone proved to be the run stopper. The Merrimack College-commit had his first chance saved but he recovered the loose ball at the ‘X’ and got to his left hand before firing a shot inside the far post. Partridge would get one back with 2:48 left, but the Warriors earned their second four-goal win against the Clippers this season.

The Warriors held onto the lead thanks to the play of Addeche, who made half of his 12 saves in the fourth, and the aggressive marking of Kerrigan, Ben Ricketts, Matt Grace, and the rest of the defensive unit.

“My defense was awesome today,” Noone raved. “To be man-down so much and hold them to seven goals, they’re a good team.”

He added, “Adam played probably his best game today. He was involved in the defense, you could hear him talking, he made some great saves, his outlet passes were on today. I need him to do that more and more.”

Foxboro (14-6) advances to face the winner of No. 4 Dracut and No. 13 Shawsheen Valley Tech at a date and time to be determined.

Below are the boys and girls lacrosse seeds and matchups for schools from the Hockomock in the MIAA playoffs. Seeds, times, and dates are subject to change and we will update this post with any changes. 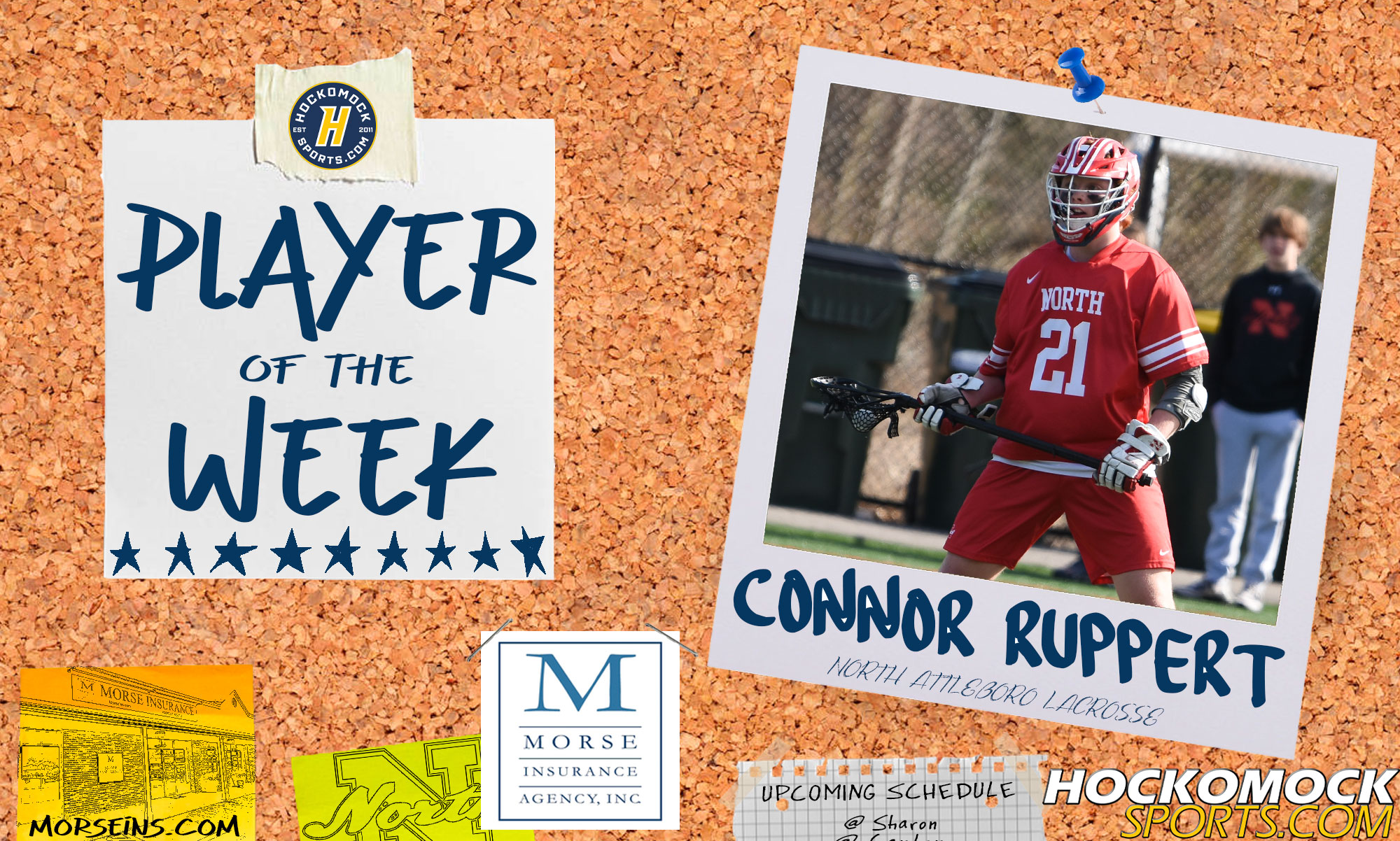 North Attleboro senior Connor Ruppert has been selected as the HockomockSports.com Player of the Week, presented by Morse Insurance, for April 18 through April 24. Ruppert is the 27th player chosen as Player of the Week for the 2021-22 school year and the third of the spring season.

Ruppert has played a major role in North Attleboro’s strong start to the season, including the winning goal in a double overtime, non-league thriller against Silver Lake. In North’s games last week, he scored 13 goals and added six assists, and now has over 45 points on the year. The Rocketeers are 6-1 on the season, with the only loss coming against Franklin, have the early lead in the Davenport division, and won four games last week. Ruppert, a senior attacker, has been the team’s leading scorer through the opening stretch of the season.

“Connor has really taken on a leadership role for us this year,” said North Attleboro head coach Kevin Young. “Even though we’re playing him at attack this year, he’s probably our best short stick defender too. He’s been great with the younger guys on the roster and it’s been a ball to watch him take charge.”

North bounced back from its first loss of the season by going on the road and winning four straight. It started with an out-of-state trip to Bishop Hendricken and a 14-8 victory followed by a short trip to Attleboro and a 14-11 win on Tuesday. Two days later, North visited Silver Lake and pulled out the 17-16 win in two overtimes. Ruppert had four goals and two assists in the game and had the winner when he took a pass from Clayton Billingkoff, split a double team, and found the back of the net. The next day, North was back in Attleboro to face Bishop Feehan and scored another dramatic OT win. Ruppert led the way for the Rocketeers with five goals on the day. 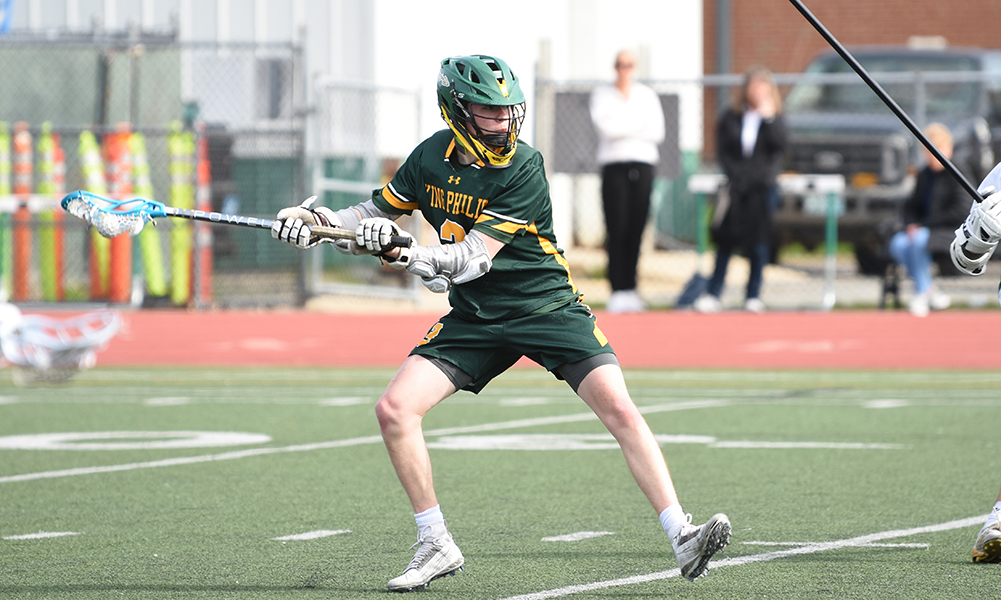 Click here for a Photo Gallery from Mansfield vs. King Philip boys lacrosse at Alumni Field, 4-25-22. 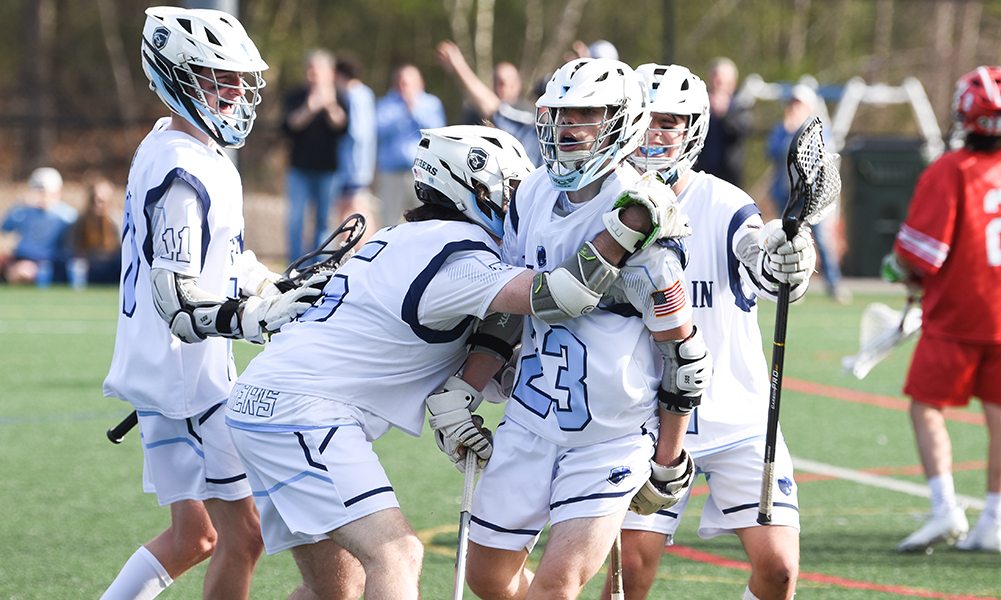