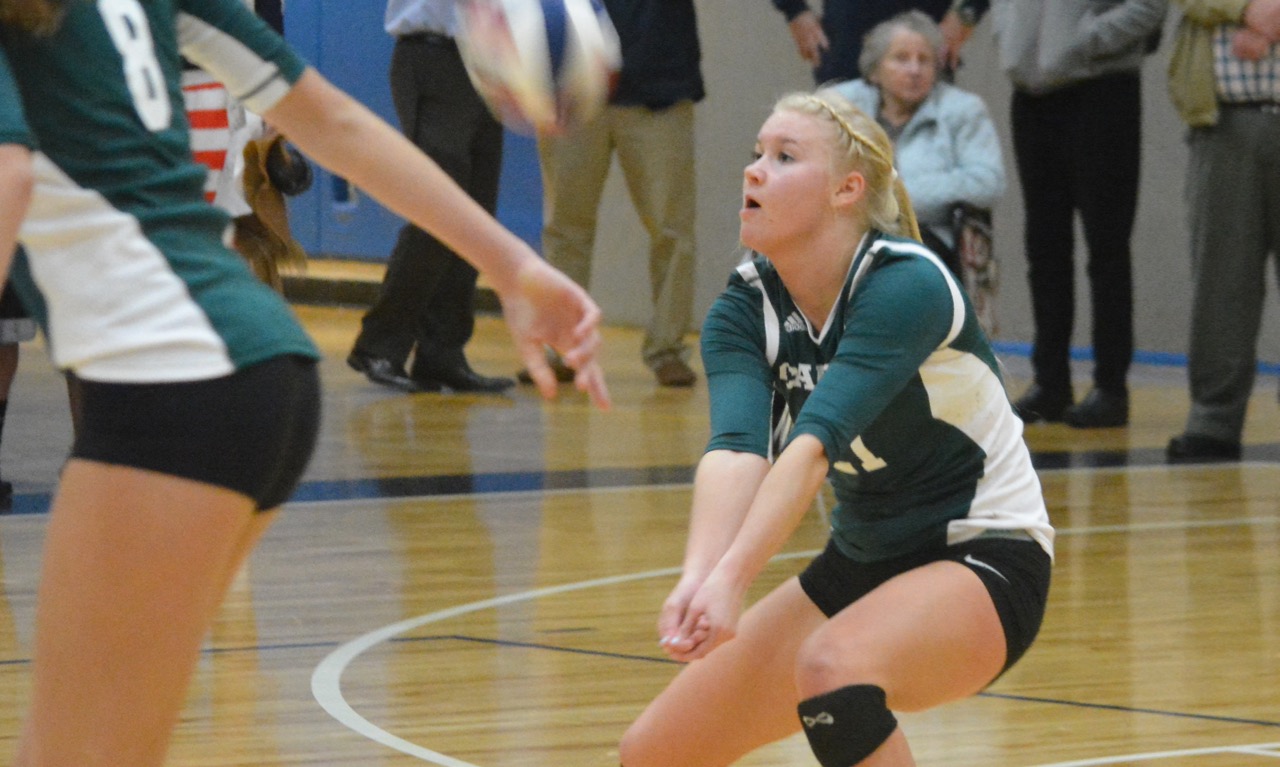 Below are the official Hockomock League Golf All Stars, selected by the coaches in the league.

Below are the official Hockomock League Golf All Stars, selected by the coaches in the league.

MEDWAY, Mass. – Canton hopes that the popular saying, “defense wins championships,” applies to volleyball as it does in so many other sports. The Bulldogs may not be the biggest or the hardest hitting team in Div. 2 Central, but they can frustrate opponents with the relentless ability to get the ball back over the net.

On Thursday night at Medway High, the Bulldogs showed off that defensive mentality against the host Mustangs and pulled out a 3-0 (25-19, 25-19, 25-20) win to advance to the Div. 2 Central final to face Westborough for the third time in the past four years.

The Bulldogs were led in the match by Hockomock MVP Elizabeth Hamilton, who showed off her athleticism and positioning to pick up 14 digs along with her team-high 15 kills. Many times, Medway’s leading hitter Jess Jubb thought she had another kill only to have Hamilton or libero Olivia Devoe (11 digs) keep the play alive.

“She’s just a super all-around player,” said Canton Pat Cawley about the MVP, “and we have relied on Elizabeth and Olivia all year for our defense. So, when good hitters hit angle and are hitting at those two I feel pretty good that we’re going to get a hand on it.”

The Bulldogs trailed only three times in the entire match (at 2-1 and 3-2 in the first set and 5-4 in the third), but Cawley did not feel like the Bulldogs were ever able to fully put away the hosts.

“To me it felt like it was close the entire way,” she explained. “We had the lead I think pretty consistently but we’d get up three, four, five, and then they’d get back within one or two.

“We had runs, but so did they right behind us.”

Canton jumped out to a good lead in the first behind the hitting of Hamilton, who had six of her 15 kills in the opening set. Following back-to-back aces by Rye Verille, the Bulldogs led by as many as eight points at 19-11. A pair of aces by Medway’s Sydney Rice cut the lead down to four but Hamilton rose up to spike the comeback and Canton took the opening set.

The second was very similar to the first with Sarah Reissfelder and Hamilton combining for three quick kills to give the Bulldogs the advantage. With the Medway crowd screaming and the Mustangs getting a little momentum, Hamilton dropped down to dig out what looked like a sure kill then hopped up and blasted a hit cross-court to make it 11-9.

Casey Shea also had a big block for a point to make it 14-9 and continue extending the lead. Shea partnered with Verille and with Emma Murphy to give Canton a blocking matchup that could compete with the towering Jubb.

“Both combinations had some blocks on her tonight,” said Cawley.

“Casey is a good blocker…it’s only her second year playing volleyball and having a good blocker on another team’s hitter is an invaluable asset.”

Verille would kill off the second set with an emphatic slam down the line to give Canton a comfortable 2-0 edge. The Mustangs, propelled by a vociferous home crowd, did not lay down and pushed the Bulldogs throughout the third set.

Riana Pozsgai had a kill and then an ace to give Medway the 5-4 lead, but it would be the final lead of the match for the Mustangs, who never trailed by more than five in the closing set.

Kehla Minkin came in and provided a spark with a pair of aces to to give Canton back the advantage. Hamilton followed with a tip for a point and setter Nicole Poole (22 assists and one block) rose up for a very rare block to make it 9-5. With a big smile, Poole excitedly turned to the bench making sure that it knew she had made the play.

Medway continued to battle and keep it close. The final dagger may have come with Canton leading 19-18, when the ball skipped off Devoe and was heading into the stands. Hamilton raced over to keep it alive and Erika Lum was there with a heads up bump to get it over the net.

The Mustangs hit it into the net and deflated as the point went to Canton. Shea would cap the win with a big block at the end to send the Bulldogs into the final.

“I feel like this is kind of a blue-collar team,” said Cawley. “We’re a very good defensive team, pretty good blocking team, and we have timely offense.”

This is another trip to the sectional final for the Bulldogs, who have had their struggles when they reach this point. Canton has only once (2012) gotten out of the sectional and Cawley insisted that her team needed to enjoy the moment on Wednesday.

“The pressure to win sometimes overrides the joy of winning,” she said, “and they really need to enjoy their accomplishments right now and we’ll see what Saturday brings.”

Canton will face Westborough on Saturday night at 7 p.m. at Hudson High.

Today’s games are listed below.
Volleyball
Canton, 2 @ Quincy, 3 – Final – Canton took a 2-0 lead but Quincy rallied in what head coach Pat Cawley called a great high school match (25-17, 25-10, 20-25, 21-25, 14-16). Elizabeth Hamilton had 24 digs and 18 kills, Sarah Reissfelder had 10 kills and Rye Verille and Emma Murphy each had nine kills. Nicole Poole had 36 assists and six sics while Olivia Devoe had 32 digs and played outstanding defense according to Cawley. Kehla Minkin and Erika Lum combined for over 29 digs for Canton.

Today’s games are listed below.
Volleyball
Canton, 2 @ Quincy, 3 – Final – Canton took a 2-0 lead but Quincy rallied in what head coach Pat Cawley called a great high school match (25-17, 25-10, 20-25, 21-25, 14-16). Elizabeth Hamilton had 24 digs and 18 kills, Sarah Reissfelder had 10 kills and Rye Verille and Emma Murphy each had nine kills. Nicole Poole had 36 assists and six sics while Olivia Devoe had 32 digs and played outstanding defense according to Cawley. Kehla Minkin and Erika Lum combined for over 29 digs for Canton.

Franklin, 3 @ North Attleboro, 1 – Final – Franklin got the win on the road with a 25-17, 24-26, 25-22, 29-27 win. Maddie Kuzio stepped into the lineup and played terrific defense according to head coach Kate Horsmann and had 12 service points, seven digs and five aces. Beth Neal had 21 assists, 12 kills, three aces and a block, Aubrie Kutil had 13 kills and three digs and Dayna McCue had 12 digs, five aces and a pair of kills.

King Philip, 1 @ Taunton, 3 – Final – Taunton’s Tatum Speicher became the first player in program history to reach 1,000 assists, setting up the first kill of the fourth set, to lead the Tigers to a marathon win over King Philip. Three of the four sets went over the 25 point threshold as Taunton got the 30-28, 27-25, 20-25, 26-24 win. Speicher had 34 assists in the match, Emily Moor played well with 15 kills and four aces and Meghan Navarro and Molly Sullivan combined for 18 digs, 10 aces and 23 service points. King Philip’s Josie Rowean had eight service points in game one and finished with 18 kills overall, Gwen Uyrus had 11 kills and Micaela Murray added five service points in game three, including two aces.

King Philip, 2 @ Taunton, 1 – Final – The Warriors scored once in each half to get the road on the win. Alli Meehan opened the scoring for KP with an unassisted goal in the first half and Caitlin Donahue added a second off an assist from Courtney Foley in the second half.

Today’s games are listed below.
Boys Soccer
King Philip, 1 @ Attleboro, 1 – Final – King Philip’s Ryan Ackles scored the late equalizer to earn the Warriors a point on the road. Attleboro senior Junior Coca put the Bombardiers up in the first half.
Mansfield, 2 vs. Catholic Memorial, 0 – Final – Ryan Amaral broke open a scoreless game in the 72nd minute off an assist from Jared Miller and then Miller converted a penalty kick just four minutes later to double the Hornets’ lead. Mansfield goalie Michael Kirejczyk made five saves in net for his eighth shutout of the season.
Girls Soccer
Attleboro, 5 @ King Philip, 2 – Final – Rebekah Entwistle scored two second half goals, including the game-winner, in the final four minutes to lead Attleboro to the win. Paige Medeiros had two assists and Jessica Bishop scored her first varsity goal for the Bombardiers. Cassie Vivar and Hannah Meier also scored for Attleboro. With the score 3-2, Madison Brown stopped a penalty kick and the rebound. Rachel Hogan and Elizabeth Cooley had the goals for the Warriors.

Taunton, 2 @ Franklin, 3 – Final – Sam Campbell and Rose Morrisette both played strong defense for the Panthers and each had key serving runs in the fifth set to lead Franklin. Dayna McCue had 43 serve receivers, 21 digs and four aces, Aubrie Kutil had 12 kills and a pair of digs and Beth Neal had 18 assists, eight kills, four aces and a pair of blocks.

Sharon @ Oliver Ames, 5:00
Field Hockey
King Philip, 2 @ Attleboro, 1 – Final – Alli Meehan put the Warriors up by a goal in the first half off an assist from Liz Furfari but Attleboro tied the game late in the second half off a goal from Kate LeBlanc on an assist from Grace Mayer. KP scored the game winner with 5:48 left when Christina Hathaway converted a penalty stroke.

Today’s games are listed below.
Boys Soccer
Foxboro, 2 @ Oliver Ames, 2 – Final – Devante Teixeira put Foxboro ahead in the first half, heading in a corner from Anthony Barreira. Thomas McCormick then scored a pair of goals, the first assisted by Chris Romero and the second from Matt Campbell to put OA ahead. Foxboro freshman Nic Biegel scored with less than five minutes left to tie the game.
King Philip 1, @ Dartmouth, 0 – Final – Joe Kellett scored in the first half as the Warriors picked up their second win over Dartmouth in an eight day span.
Volleyball
Canton, 2 vs. Notre Dame Academy, 3 – Final – Canton picked up wins  in the first two games but weren’t able to hand NDA its first loss of the season. Canton won the first two games 25-21, 25-21 but then fell 16-25, 20-25, 9-15. Elizabeth Hamilton had 18 kills and 23 digs, Sarah Reissfelder had nine kills and three blocks, Olivia Devoe had 20 digs and Nicole Poole had 27 assists and 18 digs. Head coach Pat Cawley said Casey Shea, Emma Murphy and Rye Verille had their best ever blocking games.