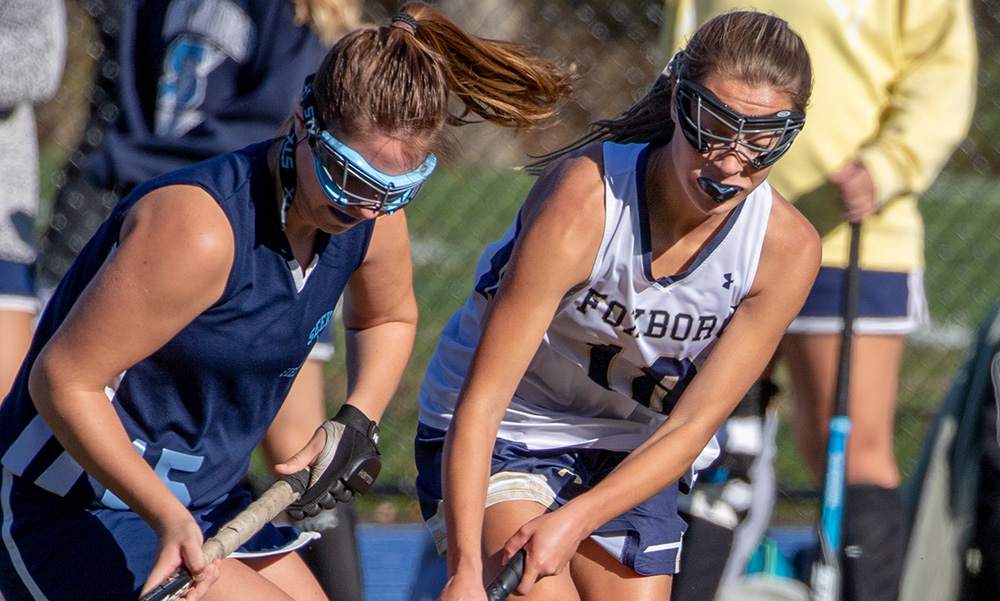 FOXBORO, Mass. – The Foxboro field hockey was in firm control throughout the first 40 minutes of its playoff-opening contest with Seekonk, applying constant pressure without allowing the visitors near any time on the attack.

In fact, the Warriors had racked up nearly a dozen penalty corners and peppered the Seekonk net with shot after shot.

But all the 4th seeded Warriors had to show for it was a 1-0 lead over 20th seeded Seekonk.

“It’s the tournament so it’s anyone’s game on any given day,” said Foxboro head coach Melissa Bordieri. “All it takes is a couple of breaks or a couple of bounces the other way.”

Fortunately for the hosts, the constant attack finally paid off as the Warriors found the back of the net four times over the final 20 minutes of play to earn a 5-0 win over Seekonk.

“I saw [Seekonk] play [its preliminary game],” Bordieri said. “It was 1-1 at the half, and Bourne dominated, [Seekonk] didn’t get a lot of corners but they still won. I told that to the girls at halftime, 1-0 is not good enough. We can’t sleep on that team, and sure enough, the first two minutes of the second half they were down our end.”

Foxboro sophomore Kate Collins squeaked a shot through on a tough angle, just getting the ball across despite a good effort from a Seekonk defender to try and clear it to give the hosts a 1-0 lead just under seven minutes into the game.

But that would be the only time the Warriors would solve the Seekonk goalie and defense for the first half. While the chances came in droves, the goals didn’t follow until the second half.

Collins’ corner connected with Molly McElhinney, who dished it off to Ella Waryas for a hard shot that was saved in the 12th minute. Collins found Jaime Notarangelo on a corner in the 24th minute, but once again the shot was saved.

And five minutes later, Ella Waryas smacked a hard cross that connected with her younger sister Mya, but the shot skipped just wide of the post. While Foxboro had six shots on net and eight penalty corners in the opening half, it also saw nearly a dozen shots go just wide.

“The last game, I think two of our four goals came on penalty corners. So I can’t wait to review the tape to see what was going wrong. It’s execution. Whether it’s the shot getting off and we’re not putting it away in front of the net, or we’re stopping our own ball, or we’re wide left or wide right…so we’ve gotta clean that up.”

Seekonk had a rare foray into Foxboro’s half early in the second half but was quickly denied by Warrior junior defender Shannon Egan, putting the hosts back on the attack.

After both Lauren Foster and Notarangelo had chances denied in the opening 10 minutes, Foxboro finally broke through to double its lead.

Collins sent a corner to McElhinney at the top of the circle, who quickly moved the ball along for a one-timer from Foster. After the initial stop, Notarangelo forced the keeper into another save at the near post. After a scrum in front of the net, Collins was able to bury her chance from in close to make it 2-0.

From there, the proverbial floodgates opened for the Foxboro offense.

Two minutes after Collins’ second goal, she helped orchestrate another. This time, her pass to McElhinney resulted in a hard shot that was redirected by Notarangelo for a 3-0 lead.

Six minutes later, Ella Waryas smashed a shot on net that was saved by Mya Waryas was there to clean up the rebound for a 4-0 lead with 9:15 left.

And the Warriors capped the scoring with 6:21 to go when Brooke Connolly finished off a pass from Notarangelo for a 5-0 advantage.