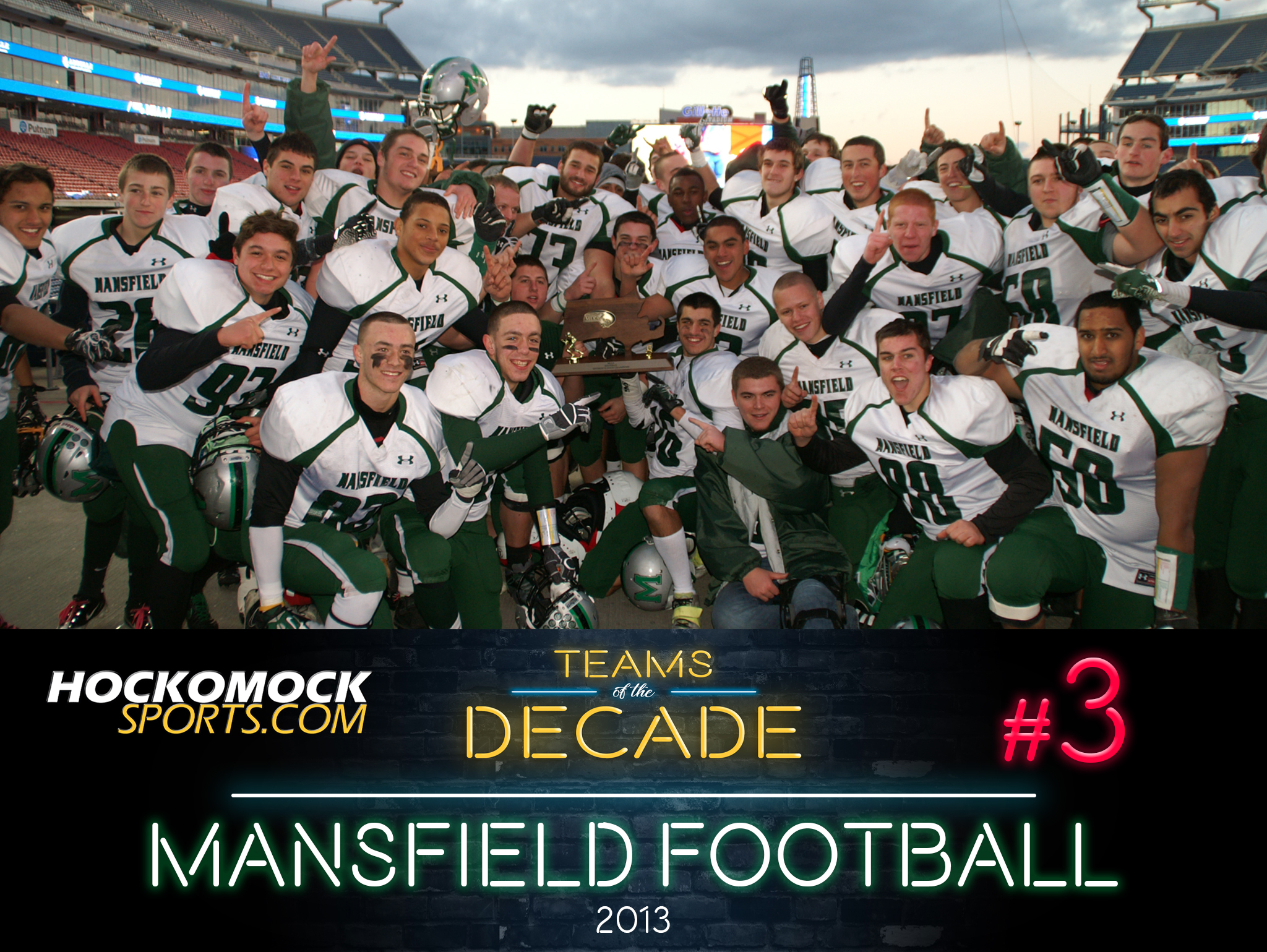 One of the signatures of the Mansfield football team over the past decade has been its ventures out of Massachusetts to play against top competition in other states. Not only do the trips allow the Hornets to see how they stack up on the field, but the off-field activities can also boost team morale and camaraderie.

Mansfield’s lone loss of 2010 came in New York when they visited Aquinas, who went on to win a state championship as well that season. A year later, the Hornets picked up one of their more impressive out-of-state victories with a decision over Christian Brothers of Syracuse inside the Carrier Dome.

Mansfield ventured out of state again to start the 2013 season, heading south to Maryland to take on three-time defending D1A State Champions Dunbar. After coming up short in the state final a year before, the Hornets entered the season with high expectations and put the rest of the Hockomock League and the state of Massachusetts on notice with their performance in the Old Line State.

“After those two experiences (in 2010 and 2011), we really felt like doing it was such a great experience, to see football in another part of the country,” said longtime Mansfield head coach Mike Redding. “The Dunbar trip was really cool because we did a lot of touring in Washington D.C., we went to the U.S. Naval Academy so beyond football it was going to be a great trip. Our concern was, ‘Can we compete with them?. They were three-time defending state champs, they had kids back, their QB had committed to West Virginia…so we knew it would be a great challenge on the road.”

Mansfield built a 21-6 lead in the game but Dunbar quarterback William Crest, who went on to play at West Virginia, rallied the Owls to take the lead in the fourth, up 26-21. The Hornets didn’t panic, driving down the field and senior quarterback Kyle Wisnieski connected with classmate Michael Hershman on a 29-yard touchdown pass with 17 seconds left to secure a 29-26 victory.

“We went down there and played one of the best games I’ve seen as a coach and win it on the road against a great team, I think that was definitely a sign for us…let’s go back to Massachusetts and keep this rolling,” Redding said. “If we can beat Dunbar at Dunbar, we can compete with anybody when we get back home.”

And not only did the Hornets compete with everyone back home, they blew most of the competition out of the water. They beat both Milton (21-0) and North Attleboro (35-14) by three scores each, scored over 30 points in wins over Attleboro, Taunton, and Franklin.

“Expectations were high, we had played a lot of seniors the year before as juniors,” Redding said. “We had kind of an up and down year in 2012, I think we were 2-2 before we went on a little run to win the league title. I think the highlight of that year, we knocked off Duxbury who had something like a 40-game win streak so it was a big upset. But then we ran into Reading in the final, which was probably an All-Decade team in the Middlesex League. But I think beating Duxbury and getting to a Super Bowl gave the senior group a lot of experience and a lot of motivation to try and finish the deal.”

The Hornets installed a new offense at the beginning of the season, going with the spread as Wisnieski worked mostly out of shotgun compared to the normal Wing-T/I-Formation approach Mansfield fans had become accustomed too.

As you can see, the offense worked just fine. Wisnieski set a handful of program records this season, including passing yards (2,541) and touchdown passes (27). Not only was Hershman (who finished with a total of 85 career receptions, third in program history) one of the most talented receivers around, junior Brendan Hill was a matchup nightmare and hauled in a program-record 54 receptions that season. Tight end Kyle Hurley and back Miguel Villar-Perez were both threats in the passing game as well.

To complement the passing game, Villar-Perez was a handful to deal with out of the backfield, finishing with 1,500 all-purpose yards that includes returns and a total of 18 touchdowns. Chris Buchanan helped lead the way from the fullback spot.

The team averaged 382 yards per game, which is second-most in program history, and it resulted in 428 total points, which came out to an average of 32.9 points per game.

The toughest game back in Massachusetts came a week before the regular season finale as the Hornets, the top-ranked team in the state, traveled to Wrentham to take on #8 King Philip.

With yards incredibly hard to come by, Villar-Perez broke free for an 88-yard touchdown in the second quarter that tied the game. Redding still recalls the play being a jet to the left side and the senior back made the play himself, cutting back up field when the first option wasn’t there. Wisnieski connected with Hurley in the second half to put Mansfield football ahead and Villar-Perez sealed it with his second score.

Mansfield’s defense pitched a second-half shutout to help pick up the win.

“When we played KP on the road, it was a different type of game, a physical, low-scoring, defensive battle…that really challenged the toughness of our group. I think winning on the road there gave our players a lot of confidence they could play a different style of game, We could score points but when push came to shove, we could line up and play tough physical defense to win a game.”

The defense was led by a strong group of linebackers featuring Alex Ruddy, Joe Moreshead, and Q’Ra Guichard. On top of that, the Hornets had a strong secondary with the likes of Aurian Dawkins and Mike Barresi.

“Defense was a lot like most of the defenses we’ve had,” Redding said. “[Defensive coordinator] Mark DeGirolamo got guys on the field that ran around and made plays for us. A real physical and fast group led by a group of good linebackers like Ruddy, Moreshead, Guichard…not a lot of size, we didn’t impress people when we lined up for stretching but when the game started, the kids played hard, played physical and were a real aggressive group on defense.”

This season also marked the start of the new tournament format. In years prior, only the league champion advanced to the tournament and needed to win only one or two games to reach the final. In the new format, eight teams qualified based on a rating system.

Mansfield football opened in style, taking down a good Wellesley at home before hosting Needham for what turned into one of the more entertaining contests of the postseason. The Hornets were their dominant selves as they raced out to a 28-7 halftime lead, and took advantage of an early second half turnover to push the advantage to 35-7.

But the Rockets refused to go away, scoring three straight, including a kickoff return and one after an onside kick recovery. The Rockets even got the ball back down just 35-28 but Barresi forced a fumble and recovered the loose ball to get possession back. On the next play, Wisnieski connected with Hill for a 51-yard touchdown to push it back to a two-score lead.

Mansfield won the South sectional title with a convincing win over #2 Barnstable, and went on the road up to Cawley Stadium in Lowell and destroyed Waltham, 41-0. The Hornets scored at will in the first half with Wisnieski connecting with Hill twice for scores. Villar-Perez also had a receiving score and Ruddy rushed one in as Mansfield held a 35-0 lead by halftime.

Mansfield took care of business against rival Foxboro on Thanksgiving but suffered a loss in the form of Hill, who went out with an injury and had to miss the state championship.

In the first-ever true state championship, the Hornets took on Central champion St. John’s of Shrewsbury. The Pioneers boasted a highly touted offense, scoring over 50 points in all three of their sectional wins, and ousting Springfield Central, 37-32, to reach Gillette Stadium.

As good as Mansfield had played all season long on the offensive side of the ball, the Hornets had one of their worst halves of the entire season. Not only were they limited to just one score, they had five turnovers in just the first two quarters alone. Those turnovers led to extra possessions for a St John’s team averaging nearly 50 points per game in the postseason.

But similar to the King Philip win, Mansfield’s defense was back in the spotlight, this time under the bright lights in Foxboro at Gillette Stadium. Despite plenty of chances, the Hornets held St. John’s to just a pair of touchdowns, both after a fumble from Mansfield. The other three turnovers, Mansfield got a turnover on downs, another a three-and-out, and Hershman came up with an interception to end the first half to keep the deficit at 14-7.

“I don’t know if it was nerves, being at Gillette for the first time, or guys trying to do too much but the first half was just a disaster. The key there was the defense. They were really talented on offense and we were handing them too many possessions. The defense played unbelievable…we gave up 14 but other teams, it could have been over.

“We couldn’t have played worse in terms of turnovers, and we were only down seven. If we just hold onto the ball, I don’t think they can stop us and we can score points. The second half was exactly what we hoped for.”

Barresi came up with another big postseason play, intercepting a pass three plays into the second half. Mansfield’s offense quickly capitalized with a touchdown run fro Ruddy but a rare missed extra point kept the Hornets down.

Nonetheless, Mansfield seemed to seize the momentum it needed. They didn’t turn the ball over at all in the second half and the offense orchestrated two real impressive drives to take the lead and add onto it. First came a 10-play, 59-yard series capped by an 8-yard rush from Hershman (six catches, eight carries, 138 total yards), and a two-point play from Villar-Perez gave Mansfield football a 21-14 advantage with just over three minutes to play in the third.

After another stop from the Hornet defense, Mansfield’s offense went back to work and made sure to take all the time it needed. The Hornets marched 80 yards on 14 plays, taking off nearly eight minutes of time off the clock before Villar-Perez (18 carries, 118 yards) punched it in from in close for a 28-14 lead with 2:38 to play.

With the win, Mansfield football capped the perfect season at 13-0 and claimed the first-ever true D2 State Championship. 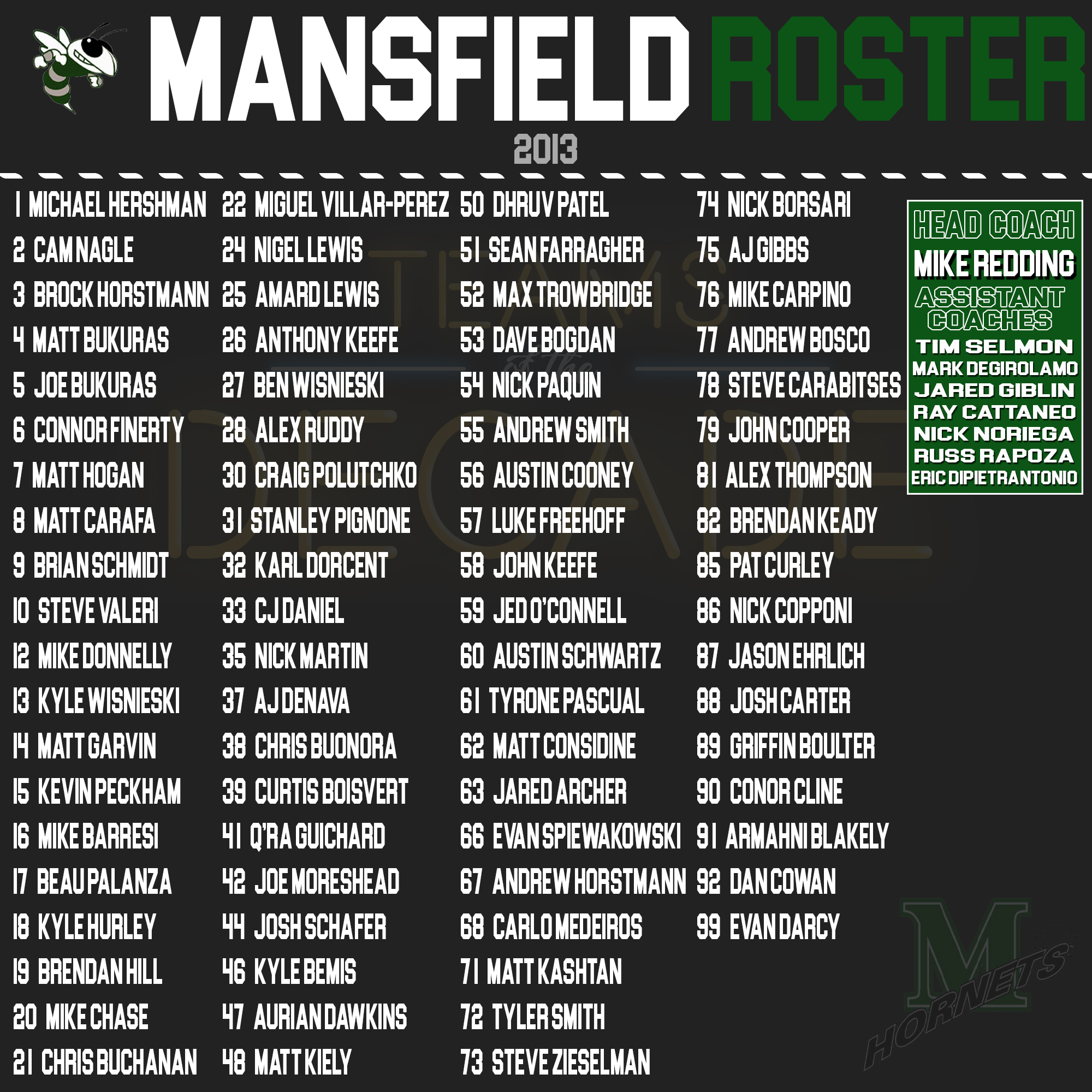 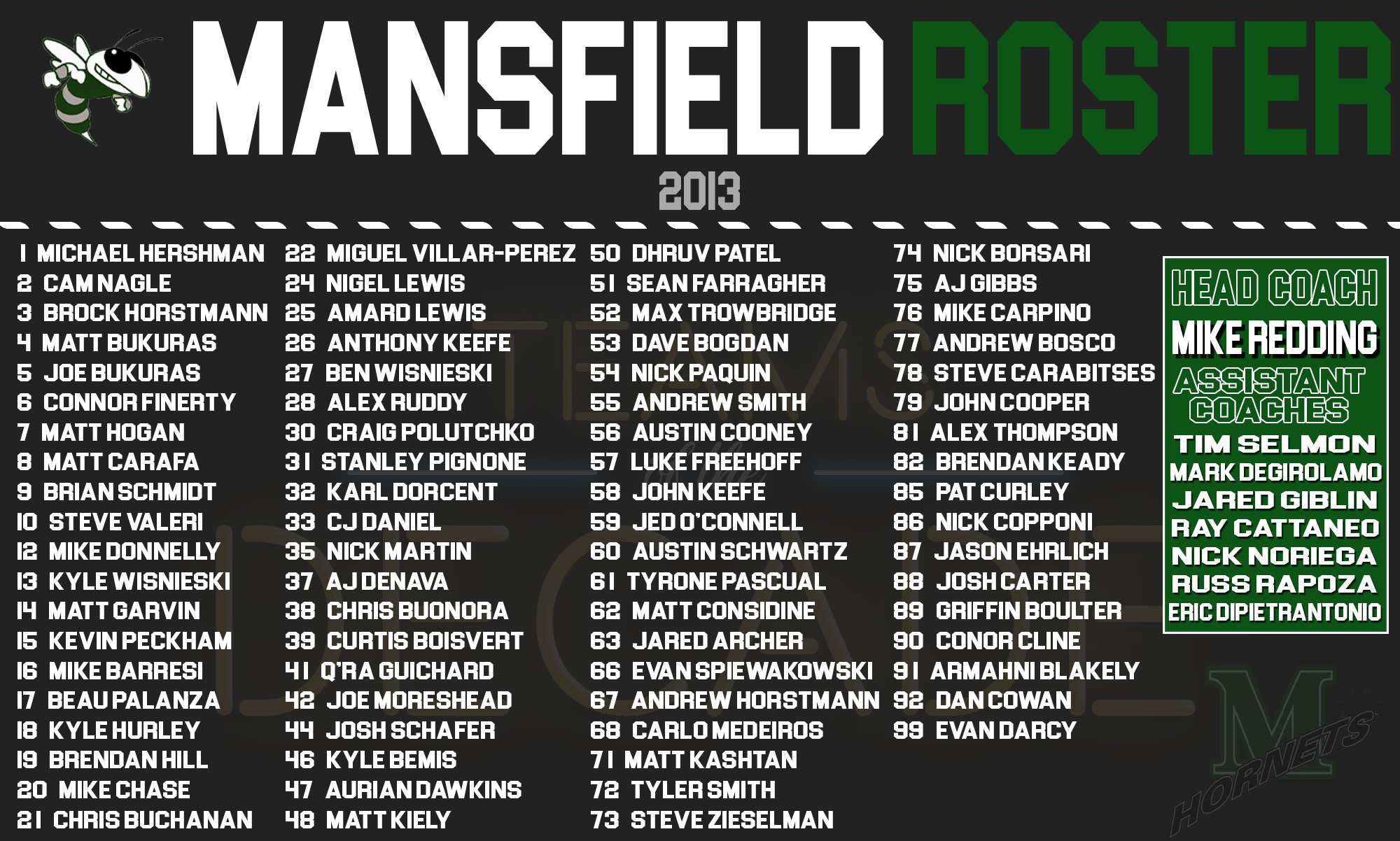 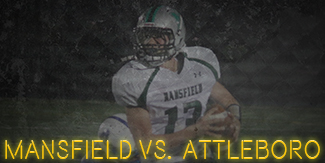 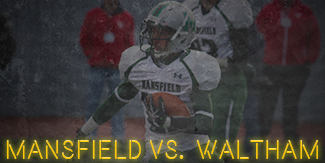 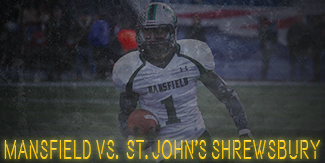