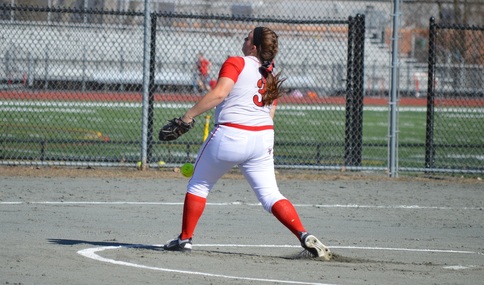 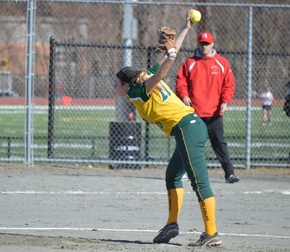 It was a battle of two titanic softball programs, when Milford (2-0) hosted King Philip (1-1) on Thursday night for their first meeting as league rivals. The two teams have combined to win the past three Division 1 state titles and, as expected, the game was tight from start to finish.

The Hawks made it 27 consecutive wins, stretching back to the 2011 state semifinal against Amherst, with a 3-0 victory that was as much about Milford’s ability to create offense as the stellar pitching of star Shannon Smith.

Milford totaled nine hits off KP senior pitcher Anna O’Neill and came through in clutch situations to put runs on the board. Cleanup hitter Caroline Fairbanks, who reached base all three at-bats, got things going in the bottom of the second with a line drive double down the rightfield line. After a strikeout and a groundout to second, Lizzie Stallone drove Fairbanks in from third with a single to right.

O’Neill, who finished the game with 10 strikeouts battled out of a bases loaded jam in the third, but the Hawks did not let her off the hook in the fifth and took control of the game.

The inning started innocently enough with a pair of groundouts. But then Sam Bonvino managed to keep her hands back, despite being completely fooled by a change-up, and poked a base hit over first base. Smith, who missed a homerun in the third by a foot, hit a solid single into the gap in right center and Bonvino hustled all the way around to score from first to make it 2-0.

After a Fairbanks single, centerfielder Rachel Levine singled to left to plate freshman Jenny Levine (who was in as a courtesy runner for Smith). At 3-0, the game felt out of reach for the Warriors and Smith comfortably made sure that the lead held up.

“I think the big thing out of today was that all the runs were scored with two outs,” said Milford head coach Brian Macchi. “Two-out basehits are huge and build momentum for the team.”

He added, “Credit goes out to these girls. They really came out and put together some productive at-bats and put the ball in play. Tacking on two and finding a way to get three gave so much more confidence as the game goes on.”

KP head coach Norm Beauchemin, who is in his first season at the helm, also pointed to Milford’s production at the plate as the biggest difference in the game.

“They did a nice job against our girl,” he noted. “All their hits were with two strikes. Whenever they got somebody on, they got the hit that they needed. They were the better team today.”

The Warriors struggled at the plate against the two-time Gatorade Player of the Year, managing only one hit and that was on a bunt by Breanna Shaffer to lead off the game. Smith recovered from the leadoff hit to strike out the next three hitters, on her way to a 14-strikeout game, and did not allow another baserunner until a two-out walk in the seventh inning.

Beauchemin admitted that he knew it would be a difficult game going against Smith, but he also felt the Warriors did not give themselves much of a chance.

“I just didn’t like the way we were swinging the bat,” he explained. “I know Shannon is an extraordinary pitcher but our approach batting needs a lot of work.”

“She has that ability to set the tone for us from the circle,” said Macchi about his University of Kentucky bound senior pitcher. “Especially when we’re at home and she going to be the one that gets the ball first. She can allow us to get that early lead.”

It was a difficult first week in the Hockomock League for Milford, with games against fellow newcomer Taunton and KP, but Smith racked up 27 strikeouts and the Hawks won by a combined 11-0.

Up next for King Philip is a game on Monday against Sharon, while the same day Milford travels to Mansfield.