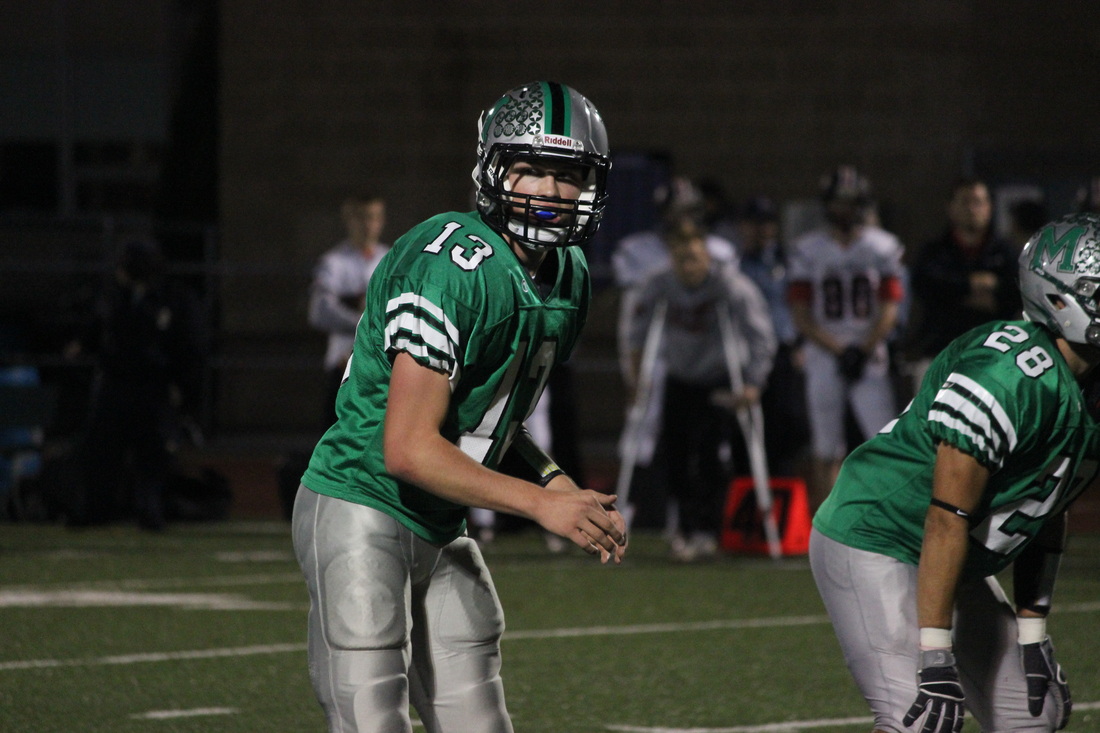 Kyle Wisnieski was strong throwing the ball but surprised Wellesley with a strong rushing game too. (Ryan Lanigan/HockomockSports.com)
By Ryan Lanigan, Editor-in-Chief

MANSFIELD, Mass. – Sometimes what you’re trying to avoid becomes exactly what you need.

Mansfield head coach Mike Redding admitted that quarterback Kyle Wisnieski was a little dinged up and they didn’t want him to run that much but his rushes proved pivotal as Mansfield beat Wellesley 31-14 in a D2 South Quarterfinal playoff game.

Wisnieski ran for a team-high 80 yards and threw for 175 more to help pace the Hornets, with his legs being a big factor in the first half.

After each team had a possession, Mansfield led 3-0 on a 35-yard field goal from senior Alex Thompson. Wellesley turned a failed onside kick attempt into points as quarterback John Fadule took a QB draw 54 yards to make it 7-3 Raiders with 3:15 left in the first quarter.

We tried to steal the onside kick and it backfired,” Mansfield head coach Mike Redding said. “We gave them a short field and they made us pay. After that I thought we settled down on defense. We gave them some hitches and slants but nothing big. Defense just played great.”

The Hornets responded in typical fashion – mixing rushes with deep passes – before Miguel Villar-Perez went in from 19-yards almost untouched to give Mansfield the lead back at 10-7.

Wellesley then went three-and-out after a rush for a loss, a sack from Dhruv Patel, and a one yard run from Fadule. On Mansfield’s ensuring drive, it looked as though the Raiders defense had figured things out. Facing 2nd and 6 from his own 35, Wisnieski looked down field but all of his options were covered. He took off running and 21 yards later, Mansfield had a first down in Raider territory. Wisnieski dropped back to pass on the next play but again had nowhere to throw, running for another 15 yards.

“They were dropping a lot of guys in coverage so it kind of opened it up,” Wisnieski said. “The pass rushers got past me and there was a lot of room to run so I just took advantage of that.”

Three plays later, Wisnieski hit a wide open Kyle Hurley for a 19-yard touchdown to go up 17-7 with 7:25 left in the second quarter. With Wellesley respecting Wisnieski’s running ability, Mansfield scored again on their next drive, going 63 yards on seven plays capped off by a 1-yard run from Chris Buchanon. During the drive, Wisnieski hooked up with Villar-Perez over the middle twice for a total of 30 yards and Brendan Hill drew a pass interference call that put Mansfield at the 5 yard line.

“With the playoffs, you have to start making plays and you have to do a little more than you have before if you want to win,” Wisnieski said. “Every team is going to be competitive and everyone is going to come to play.”

Mansfield scored their final touchdown on the first play of the 4th quarter when Buchanon punched it in from 3 yards out. Wellesley scored their second touchdown late in the fourth quarter with back ups in for both sides.

DAWKINS IMPRESSIVE
Senior Aurian Dawkins missed the first couple of the games of the season but you’d never know it by his play.

Dawkins, who goes by the nickname of Peewee, picked off Wellesley QB John Fadule twice for his team leading fourth and fifth interceptions of the season. His first pick came in the second quarter when Fadule just missed the hands of his receiver and the ball fell right to Dawkins. His second was even more timely, picking up Fadule on 4th down after the Raiders had driven 49 yards and into Mansfield territory.

“Aurian Dawkins has been great for us,” Redding said. “We moved him from corner to safety because he just covers so much ground and he has good instincts. He’s a playmaker and he’s really come into his own.”

Dawkins didn’t exactly have the look of a football player when he first arrived at Mansfield but has proved his worth with time.

“If you told me as a freshman that he’d start for us, I would have laughed,” Redding said. “He was about 5’2, 85 pounds and on the freshman team. He’s kept working and working and he’s become a heck of a football player.”


Ryan Lanigan can be contacted at RyanLanigan@hockomocksports.com and followed on Twitter at @R_Lanigan.