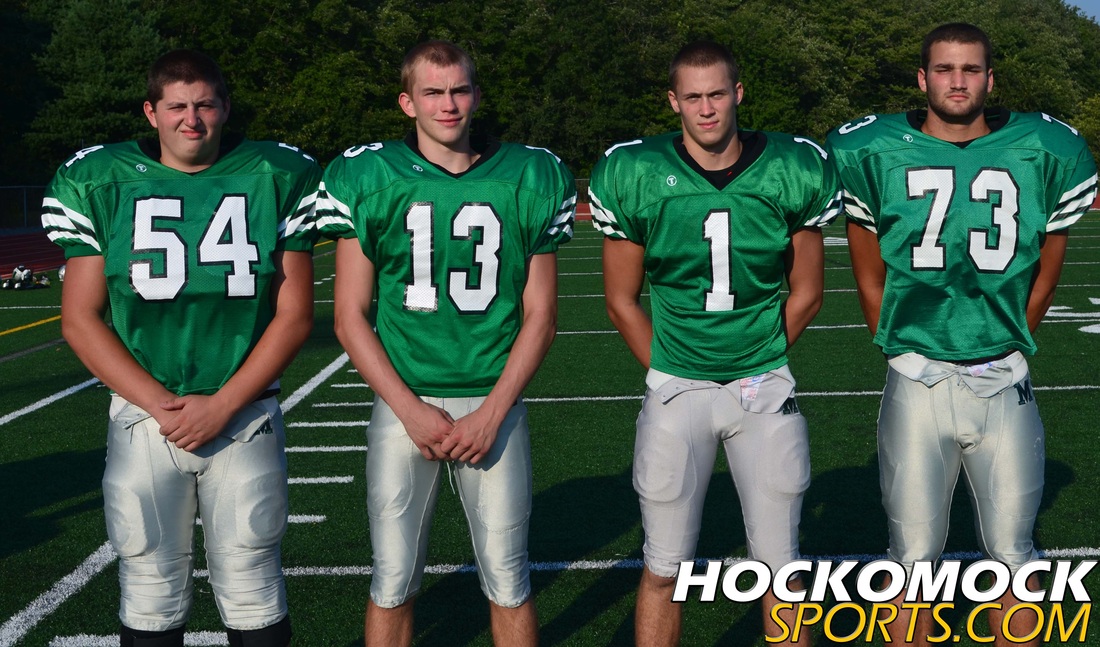 Photo courtesey of MansfieldFootball.org
Team Overview
After a successful 2012 regular season, the Mansfield Hornets were left with a bitter taste when they fell short in the Division 2 Super Bowl to Reading. Now the Hornets are returning a strong offensive core and key defensive players and are geared up for another deep run.

The new offense will focus heavily on the passing game while the defense is shifting from power to athleticism and quickness.

“Last year, we had some experience up front and young at the skill positions,” Redding said. “This year, it’s the other way around, we have all those skill guys back.”

After finishing 7-4 last year in the regular season, the Hornets are looking to improve that mark this year.

“We’re just trying to come out everyday and work hard and improve in all areas – up front, skill players, defense, offense, everyone’s just trying to get better so we can hopefully do better than last year,” captain Kyle Wisnieski said.

The Hornets will open up their season with a trip to Maryland to take on the Poets of Dunbar High School in the Sugar Cain Classic.

Offense Overview
The Hornet offense starts with senior quarterback Kyle Wisnieski, who is poised to have a solid year with targets he has. Last years squad featured a double-headed running attack comprised of Kevin Makie and Robbie Rapoza. This years offense will have a new look and could accomplish something new for the first time in the program’s history.

The biggest reason for the offensive change is because of how dangerous receivers Brendan Hill, a junior, and senior Michael Hershman are for Mansfield amongst others. Redding said can see both players catching close to 40 passes this season.

“I just think it’s a lot of weapons everywhere,” Wisnieski said. “Obviously we have Brendan, but beyond that there are a lot kids that stepping up that are filing positions that are ready to go. They’ve been waiting for their opportunity, they’ve worked hard and they are reading to make some plays.”

With both Makie and Rapoza graduate, Redding said he expects that position to be filled by group of players.

“It’s going to be by committee,” he said. “With the spread, we’re going to have Alex Ruddy, Chris Buchanan, Curtis Boisvery, and Connor Finerty – all four of them are capable of being the one back guy that can run the zone so we really feel good about that position.”

Redding also said the team feels good about the slots, naming Miguel Perez, Matty Bukuras, Cam Nagle, and Aurian Dawkins, noting their ability to catch and run with the ball.

“That inner core of those three backs, with the fullback and the two slots, we feel like we’re two deep. We have good experience, we have good depth, and good skill.”

Defensive Overview
Mansfield isn’t like some of the other teams in the league that have lost a big playmaker on the defensive side of the ball.

They lost a group of them.

The likes of James Comer, Ryan Galanti, Antonio Medeiros, Alex Miller, Alex Pardo, and Will Palanza are all graduated, leaving a big opportunity for players to make a name for themselves.

Captain Steve Zieselman will anchor the defensive line but the Hornets are going to rely on their linebackers and secondary heavily.

“We lost some big strong kids up front,” Redding said. “Defensively we really have to play fast, we have to be aggressive and run to the ball. We’re solid up front but we’re not overwhelmingly big but we are strong. I like our linebacker level, our whole secondary is back. We have to be all about speed to the ball because we just aren’t big enough to pound people up front.”

“Basically we’re looking for playmakers – guys that are going to run around, make their read and get to the football,” he said. “We’re trying to be an athletic defense this year instead of just putting guys up front.”

2013 Storyline
The Hornets are entering the season with a target on their backs despite not having walked away with the hardware last year. The 2012 Kelley-Rex champions have a lot of talent, but a very tough schedule awaits Mansfield.

After opening up in Maryland, the Hornets will host Milton in Week 2. They have a week off before jumping into their Kelley-Rex schedule that starts with a home game against North Attleboro. Three of their next four games will be on the road – traveling to Attleboro, hosting Taunton and then visiting King Philip and Franklin at the end of October.

“There’s no breaks, there’s no rests,” Redding said. “If you make the playoffs, you just keep rolling. Those two non-league are critical to really find out who you are, develop an identity, square away your weaknesses, and then use that bye week to put it all together.”

If Mansfield is to get back to the Super Bowl, after their grueling division schedule, the Hornets will be faced with weekly playoff games.