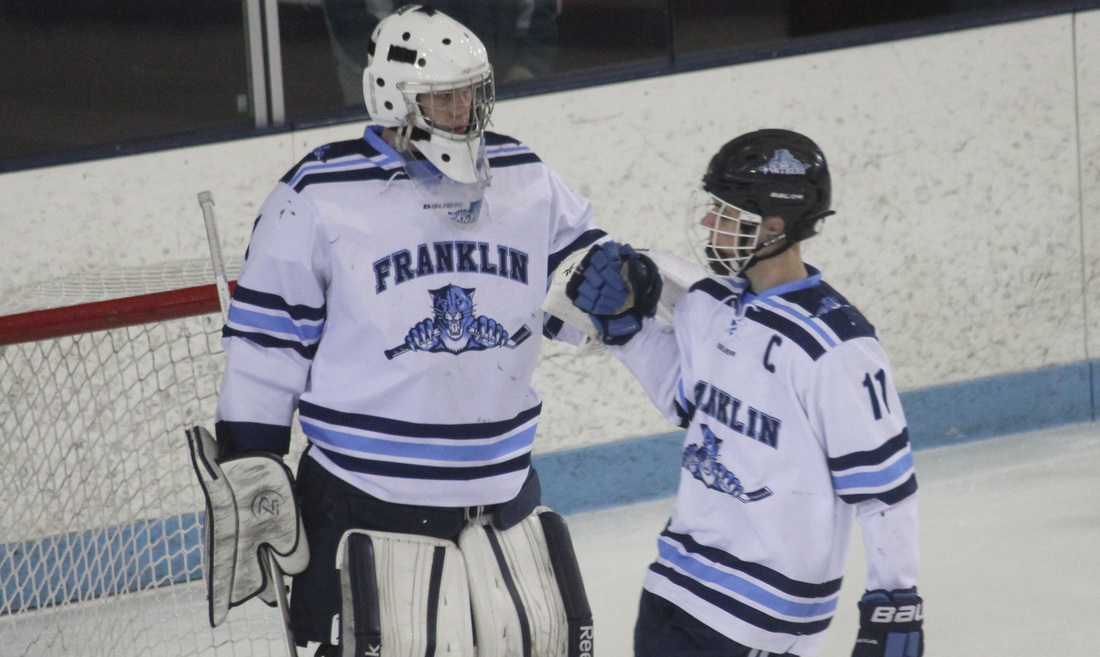 Ryan Shea (left) made 32 saves in net while Ryan Spillane (right) scored the game-winning goal in overtime. (Ryan Lanigan/HockomockSports.com)
By Ryan Lanigan, Editor-in-Chief
BILLERICA, Mass. – When it comes to narratives, take your pick.

Franklin twice battled back from one-goal deficits, scoring the game-tying goal with under a minute to play.

Ryan Shea committed robbery, getting a piece of Jake Farrell’s shot midway through the third period with the Panthers down 2-1.

Defenseman Nick Morris, who missed out of a good chance in the first period, was the one to tie the game for Franklin with 31.7 seconds left.

DJ Shea scored the biggest goal of his season, just his fifth, with just under 10 minutes to play to tie the game, tipping home a shot from Morris after a good hustle play from Kyle Lundgren, a third-liner.

And finally, there was Ryan Spillane, this year’s Hockomock League MVP, who buried the puck 2:36 into overtime just after setting up a play with linemate Alec Borkowski to give the Panthers a thrilling 3-2 win over Xaverian in a Super 8 play-in game.

With the win, Franklin is officially a member of the Super 8 field and will take on #2 Malden Catholic on Sunday night at 6:00 at the Tsongis Arena.

Fast forward to overtime with the game 2-2, Spillane was able to find Borkowski up ahead. Borkowski raced in on goal, putting the puck in a scrum and it eventually bounced out on the other side where Spillane had an open net and buried it.

“Me and Alec set up a play, he was flying off the face-off and I tried to get it up to him,” Ryan Spillane said adding he had never scored a goal so big. “It ended up working out and he had a breakaway, he beat the goalie, puck came out and then there was an open net.”

“We’ve been playing together since like sixth grade,” Ryan Spillane added of linemates Borkowski and Joe Bourque. “We have a lot of chemistry and we work the puck well together and we make the passes and it sets up some goals.”

It took a last ditch effort for the Panthers to even get to overtime. Xaverian took a lead in the first period was able to rip off a low wrist shot that beat Shea and the Hawks went up 1-0 5:58 left in the opening frame.

Franklin tied the game just over six minutes into the third period when Lundgren was able to reach out and get the puck to Morris at the point. Morris then rippped a shot and DJ Shea got a piece on it to beat Xaverian goalie Aidan Murphy five-hole.

The momentum seemed to be completely on the Panthers’ side, keeping the puck in the offensive zone for over a minute following the goal. But Xaverian turned a harmless clear into the go-ahead goal. Andrew Durkin skated behind the net and put a slow moving pass through the front. The puck found its way through traffic and back to defenseman Nick Shaw, who ripped off a shot that found the back of the net.

“It took us a little while to get that momentum back,” Franklin head coach Chris Spillane said after Xaverian went ahead for the second time. “Our one man forecheck wasn’t working for us so we changed it up to two and said lets see if we get a turnover and we did. Guys were crashing the net and then a defenseman scores the game-tying goal.”

With 1:59 left and down by a goal, Franklin called a timeout. The message from coach Spillane was simple.

“We’ve got nothing to lose,” Chris Spillane said of what the message was. “We’re here now, we’re down a goal so we need to do something positive. Defenseman pinch every time you can, forecheckers send two hard and every time we get a puck we’re going to the front of the net and that’s basically what they did.”
With the goalie pulled, Franklin went all in on their attack. In the end, it was Morris that crashed the net and was able to get his stick onto a pass from Alex Cambell to tie the game with 31.7 seconds left. It was a perfect reward for Morris after missing his chance in the first period.

“We had a nice back door play set up [in the first period] and this just shows this resilience of our team is, that it never quits and you play until the final horn,” Chris Spillane said. “To jump in the play like that, it’s a smart hockey play. You get in front of the net and get it on his stick and it’s in.”

“Nick Morris made a great play, he’s playing through an injury and it just showed he has a lot of heart and he came through for us,” Ryan Spillane added.

The Panthers were outshot in the game but Ryan Shea picked up 32 saves – none bigger than his save on Farrell in the third. It looked as though Farrell was going to grab his second goal of the game and put it out of reach, but Shea moved across his crease and got just enough on the shot to prevent it from going in what was an open net. Spillane credited it as a big game changer.

“He’s been the guy all year long,” Chris Spillane said. “You talk about goal scorers and points and things like that, that’s great but you need a guy to play in net. Defense wins championships and he’s been there for us all year long and he showed it tonight with a couple of big saves when we needed him.

“That last one on [Farrell] changed the whole momentum of the game. Wide open net and he got over there and got something on it and our bench just lit up and jumped out and it was a changed game from there.”

Franklin will now play Malden Catholic on Sunday night in the first game of a best-of-three series. The game is scheduled for a 6:00 start at the Tsongas Arena.
Ryan Lanigan can be contacted at RyanLanigan@hockomocksports.com and followed on Twitter at @R_Lanigan.