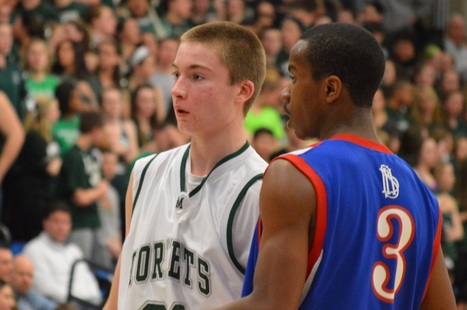 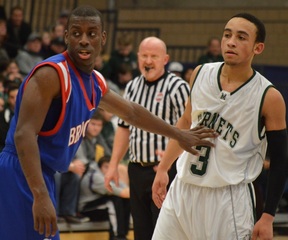 Boston, Mass. – After a tough shooting night against league rivals Franklin, Mansfield head coach Mike Vaughan expected a reaction from his team. Even Vaughan could not have foreseen the first half shooting display that the Hornets would have against Brookline.

Mansfield knocked down nine three-pointers and shot an amazing 77 percent from the field in the opening two quarters of Tuesday’s Division1 South semifinal against Brookline at UMass-Boston. The Hornets built a big lead at the half and cruised to a 68-50 victory that will set up a sectional final against North Quincy on Saturday night.

“If we got some looks, I knew we would make some shot tonight,” said Vaughan. “When we’re shooting, we’re obviously a much different team but I honestly thought the difference tonight was our rebounding. I said to my guys, if we rebound then we win and I thought we did that.”

Sophomore Ryan Boulter has had a tough start to his state tournament career, but he exploded in the first quarter on Tuesday. Boulter came off the bench and instantly found a rhythm. He knocked down four three-pointers and scored all of his team-high 14 points in the quarter.

“It felt good. I haven’t been shooting the ball well the last two games and this is a huge boost of confidence for me shooting-wise,” said Boulter after the game.

Leading by 12 after one quarter, Mansfield went right back to work in the second. The Hornets showed their balance offensively. This time it was forward Greg Romanko’s turn. The senior caught fire and knocked down a trio of three’s. For the game, Romanko made four from beyond the arc and also finished with 14 points.

The Warriors tried to get back into the game in the second half, but junior point guard Rocky DeAndrade stepped up with the dagger. He made a steal, got the layup, and drew the foul to extend the Mansfield lead back to 26 points at 56-30. From that point, the question was only by how much Mansfield would win.

DeAndrade had another impressive tournament performance with 12 points and a solid defensive effort on Brookline star guard Elijah Rogers. Hockomock League MVP Brendan Hill had a subdued game with just nine points, but time and again showed the combination of ballhandling and passing that makes him a difficult cover. Sophomore Michael Boen also had a strong game with eight points including a pair of three’s.

Mansfield are back in the sectional finals for the third time in four years and Vaughan is proud of his team’s ability to overcome adversity.

He remarked, “We battled the other day in an overtime game and showed up tonight and didn’t seem tired or fatigued and just absolutely played great. I’m extremely proud of the guys and to be a Hornet.”

Mansfield plays Saturday night at UMass-Boston with the opening tip scheduled for 8 p.m.