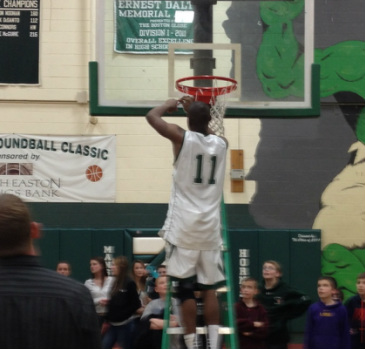 Mansfield clinched the Kelley-Rex division title with a 45-41 win over Taunton on Thursday night. Rocky DeAndrade and Brendan Hill led the way for the Hornets with 12 points apiece. Fawaz Mass was the star for the Tigers with a game-high 16 points.

It was a defensive game from start to finish and both teams struggled to get open looks. Mansfield took five minutes to get its first points of the game, but went on a 19-6 run that gave them a nine point lead midway through the second quarter.

Taunton senior forward Anthony Parker buried a three-pointer at the shot clock buzzer that made it 19-13 and kept Taunton in the game. This would be a pattern as the Hornets always appeared to be on the verge of breaking the game open, but the Tigers kept finding a response. Parker had seven of his 11 points in the second quarter.

The Tigers tied the game at 29-29 late in the third quarter on two free throws by Mass, but Mansfield junior Kevin Connor completed a three-point play to give the Hornets a 32-29 lead heading to the fourth. Connor came off the bench to score nine points for Mansfield, including five in the third.

Mansfield started to pull away in the fourth quarter and got a dagger three-pointer from Ryan Boulter on a rare good look in transition. Taunton did not go down without a fight thanks to Mass. The senior guard scored 10 of his 16 points in the fourth. He finished a three-point play and knocked down a straightaway three, but it was not enough.

In the end, it was Mansfield celebrating a league title by cutting down the nets at their home court.