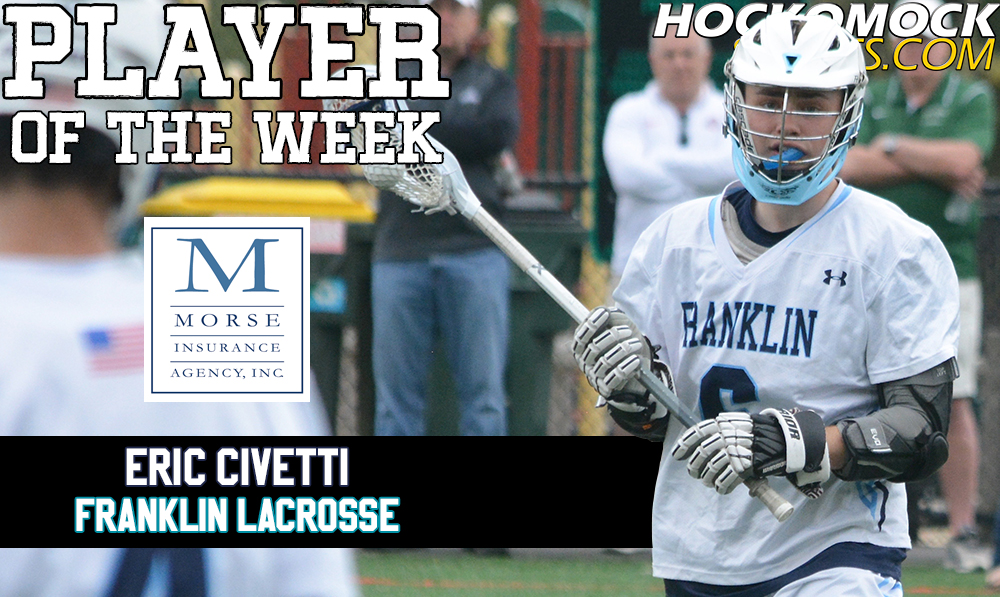 Franklin senior Eric Civetti has been selected as the HockomockSports.com Player of the Week, presented by Morse Insurance, for May 6 through May 12. Civetti is the 28th player selected for the 2017-18 school year and the fifth player chosen during the spring season.

Civetti scored 15 goals and assisted on four others this week to lead Franklin to a marquee win against state power Longmeadow and an important league victory against and up-and-coming Oliver Ames team. The program’s all-time leading scorer added to his record-breaking career against the Lancers by scoring nine goals, which sets a new single-game mark for the Panthers. He had twice before scored eight in a game.

Franklin coach Lou Verrochi said of Civetti after his record-breaking performance against Longmeadow, “He can create his own offense. He’s been able to do it for four years now. He’s just an outstanding player and to do it against them was huge because defensively I thought they were very good, he just had a great game. He gets up for big games like this.”

On Sunday afternoon at the Beaver St. field, Civetti broke the single-game scoring record that he had tied twice before in an impressive display. He dismantled the defense of one of the top-ranked teams in the state, scoring with an array of moves near the crease and showing off his shooting power and accuracy. The Rutgers University-commit had a highlight-reel, behind his back finish into the top corner, and set the record with a goal in the final minute, as the Panthers rolled to a 22-8 victory.

Civetti added to his league-leading goal tally on senior night against OA. He scored six times and had a pair of assists to keep Franklin unbeaten in the league (the Panthers are closing in on 50 straight wins in the Hock) and, thanks to Foxboro’s win on Friday against King Philip, sealed at least a share of another league title. On the season, he has a league-high 84 points, which is 22 more than his closest competitor, including a league-best 61 goals. His 23 assists are third-best in the Hock.