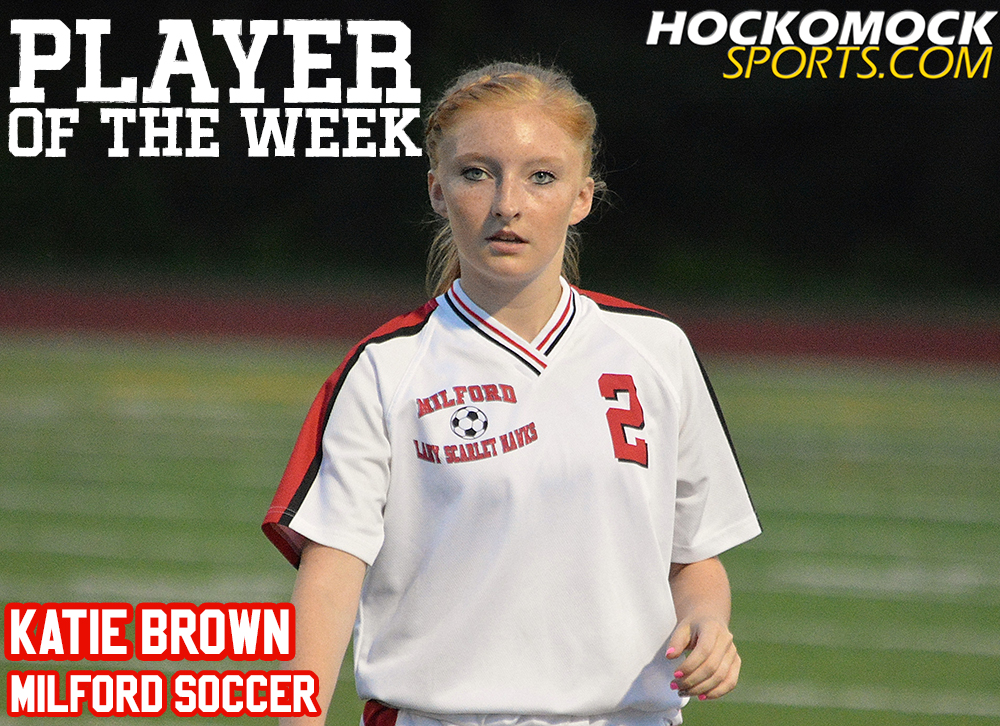 By HockomockSports.com Staff
Milford senior forward Katie Brown has been selected as the HockomockSports.com Player of the Week for Sept. 7-13, the second player chosen in the 2015 season. Brown scored six goals in three games for the Hawks this week, all of which Milford won to improve to 3-2 on the season.
Brown started the week with a career-best five goals against non-league opponent Hudson. Milford coach Jay Mastaj noted that only one was a close-range finish. The rest were from 12-18 yards out as the Hawks won 6-2. Mastaj said, “There wasn’t an easy one in the bunch.”
“She scored one and then just caught fire for the game,” said Mastaj about the five-goal outburst.
Against Attleboro on Wednesday, Brown scored the lone goal in a 1-0 victory that earned Milford its first Hockomock points of the season. On Friday, Milford also beat Sharon 1-0 and although Brown was not on the score sheet Mastaj credited his captain’s work rate and partnership with fellow striker Kristen Franzini for helping set up the score.
“She’s a leader on our team and someone that works hard every game for us,” said Mastaj on Sunday. ‘Even when she isn’t scoring, her hustle helps create chances and sets the tone for the team.”
Brown and the Hawks will take on Davenport rival Foxboro on Monday and Mastaj remarked that there are no easy games in the league this season and he is counting on Brown, one of just four seniors on the squad, to have the team ready to go.
Player of the Week is selected by the HockomockSports.com staff. Nominations can be submitted throughout the week up until Saturday night at midnight. There will be a poll posted on every Sunday with the nominations. The results of the poll influence the selection but do not strictly dictate the decision.