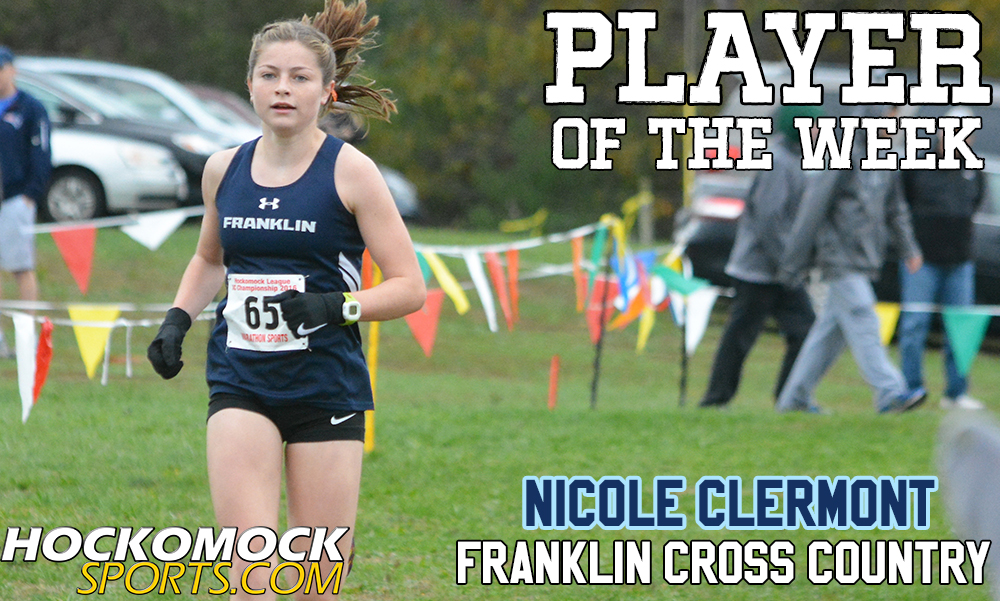 Franklin junior Nicole Clermont has been selected as the HockomockSports.com Player of the Week for October 23rd through October 29th; the eighth player chosen for the 2016-2017 season. Clermont dominated the course at the Wrentham Development Center, winning the Hockomock League Championships for the second straight year.

On Saturday morning, Clermont finished the 3.1-mile course in 19:06.49, besting her time from last year by over five seconds and crossing the finish line over 40 seconds before the next runner. During the dual meets, Clermont was undefeated (5-0) as Franklin clinched its second straight Kelley-Rex division title. Franklin placed fourth as a team at the league championship meet.

“Nicole has really emerged as an elite distance runner in the state,” Franklin head coach Paul Trovato said. “This was her second straight Hockomock League Cross Country Championship and she has worked extremely hard to reach that level of success. Her work habits have become infectious as she brings out the best in her teammates and encourages them all the time.”

Clermont was first against Oliver Ames (19:58), Taunton (21:05), Mansfield (20:29), Attleboro (21:11) and King Philip (19:46). She has also impressed outside of the league dual meets this season. At the Frank Kelley Invitational in early October, which was also held at the Wrentham Development Center, Clermont finished 2nd overall, less than 10 seconds behind Lincoln-Sudbury’s Alexa Babick. At the Twilight Invitational, Clermont crossed the finish line third overall in a race with over 200 runners.