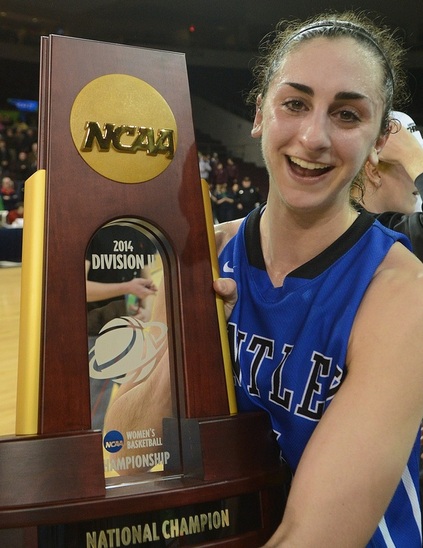 Trailing by nine with 5:37 remaining in title game against West Texas A&M, it seemed as though Bentley University’s women’s basketball team was about to come up just short in its quest for an elusive national championship.

But, the Falcons were able to rally behind a suffocating press that sparked a 19-5 run and a 73-65 victory in the Division II championship game in Erie, Pa. The victory was number 917 for legendary coach Barbara Stevens and the first national title for the leader in career wins for a DII coach.

During the closing stretch of the game, former Oliver Ames star, Gatorade Player of the Year, and 2010 state champion Lauren Battista, who is a favorite to win the WBCA Player of the Year, knocked down a three-pointer to make give Bentley a 63-61 lead and then followed that with a steal and a layup.

The win capped an incredible four years for the Easton native. Battista was named an All-American three times and earlier this season became the program’s all-time leading scorer. Not only did she win the final game of her career, she also won every game her senior season as the Falcons completed a perfect 35-0 campaign.

Two days after winning a national title and the day after arriving back in Waltham with her teammates to a hero’s welcome from the Bentley community, Battista took a few minutes to speak with HockomockSports.com about her experiences and what it meant to win Bentley’s first ever national championship. 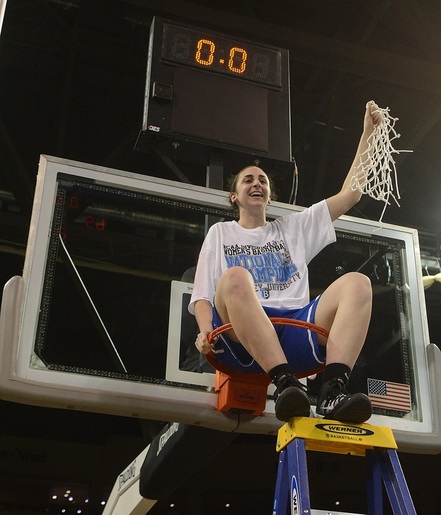 How does it feel to be a national champion?

LB – It feels pretty crazy right now. It almost doesn’t feel real a little bit. We talked about wanting to win a national championship for so long and now that we actually are national champions it almost feels like we’re still dreaming about it. But, it actually happened.

It’s amazing and I’m so happy that my team stepped up at the end. Everybody made some huge plays and it was so exciting just playing for the national title and then to win the whole thing – I couldn’t have asked for a better ending to my Bentley career. I think we’re all still amazed by the whole thing.

You had a similar situation at the end of your high school career at Oliver Ames too. It’s got to be a good feeling to know your last game is a victory and going out on top.

LB – It’s a little strange how similar this year was to my senior year in high school. Obviously, [it’s] on a different scale – a national scale not just a state championship – but another senior-led team coached by an amazing coach – Coach Stevens, as was Laney in high school. Going all the way and winning it all was the best thing I could have asked for.

I remember back around New Year’s, Coach Stevens had us all do New Year’s resolution – we had to make a basketball one and just a general one – but I remember my basketball one was to win my last game in a Bentley uniform. So, it’s funny that it came true and in such an amazing way. It seemed pretty bad for a while there in the second half and then in the blink of an eye we were tied and another blink and we were up. It’s an awesome ending to a really great four years for me.

What were you saying to each other in those final minutes when you were trying to get back into the game?

LB – Once we put the press on, obviously that was the game changer. We don’t use that press a ton and I think that it can be attributed to the fact that we’re usually up by a lot at the end of the game, but in the past it’s worked like a charm for us when our backs are against the wall. We really buy into that press, which is an aggressive, trapping press – gambling and leaving people open on the other side of the court to come up and trap the ball.

Down nine and we needed to make some stops and one of our coaches said, ‘This is like any other day in practice where we do a situation run.’ We reenact the same thing over and over again, so it wasn’t something that we hadn’t seen before it was just a much more special reward at the end of it.

Going back out there after that timeout and putting the press on, you know, making two or three steals in a row I believe and tying it up that gave us all the confidence to make that final push and win the game.

Describe your feeling when the final horn sounds and you know that you’ve won.

LB – Honestly, I thought that I would’ve just collapsed because I was so happy and we were all screaming and jumping but then we’re sad and crying because it’s over and that’s it no more Bentley basketball for me as a player. An then obviously everyone rushing the court and jumping, piling on top of each other – I thought I was literally going to drop to the floor.

But, it was like nothing…I mean, I’ve experienced championships before but nothing to that scale and I was just so excited for my teammates and even more excited for Coach Stevens. She deserved a national championship more than anyone and also the alumni that have played for Bentley in the past. That’s the goal of every Bentley team is to be the one that finally brings home a national championship. It’s just an amazing feeling.

How much did it mean for you to get that championship for Coach Stevens?

LB – I think it meant everything to us. I know in the second half when we were down and were thinking to ourselves, ‘Oh wow, we really screwed this up,’ I think I was most sad for Coach Stevens because she works so hard every year. She’s been at Bentley so long, she’s had so many amazing teams, amazing players, and she put so much time and effort into making her teams prepared to win. I think that I was a little more upset that we were going to lose because Coach Stevens wasn’t going to get a national championship.

Seeing her with the trophy and seeing all the alumni that she’s coached…it was just awesome for her to finally get that accomplishment. She’s accomplished so much and she’s an amazing coach and deserves 100 national championships. I’m just glad that we got to give her this one.

I spoke with Laney on Thursday and she was in Erie, did you get a chance to speak with her before the game?

LB – She was there for all three games and after the first game she came to the hotel and we were able to chat and we stayed in touch through text and things like that. She was even more excited after the game with her connection to me and Coach Stevens being one of her best friends. [laughing] She was crying hysterically but she was just so happy for both of us and I was just glad that she was there to witness it and be a part of it all.

How important was being able to continue that relationship with Laney and was that something that you took into considerat
ion when making the choice to go to Bentley?

LB – It’s been awesome to still have Laney as part of my life. Not a lot of college basketball players, I don’t think, continue on that relationship with their high school coach, but if they do it’s not as strong as the one I have with Laney. Having her at games and I can look up and see her cheering for me and having her support throughout it all has been huge.

I consider her a friend. We’ll just go out for lunch or dinner and just talk. She’s amazing; she’s so supportive. I think one of my factors when choosing Bentley was obviously the coach and knowing how close Coach Stevens and Laney were and knowing they had similar personalities and that both were super-successful, I knew that I was just going to get another role model, friend, and mentor. That really helped me make my decision because I felt so comfortable here and with Coach Stevens.

Having Laney here the whole time has been great and my whole team knows her now and she’s just such an amazing person that everyone loves her. I’m happy to have her as one of my biggest fans.

Laney mentioned that you had talked about going to a place where you would have a chance to win a national title, was that a factor? Also, how does it feel to go through the four years and come away with that title?

LB – It couldn’t have been a better ending. It’s a great story.

When I was looking at schools, I was looking at a few Division I schools and very few Division II. A lot reached out to me but I knew that, if I was going to a Division II school, it would be either Bentley or Stonehill just because I knew how great of a program they both had. But, I still had it in my head that I was talented and could play at the Division I level. What they helped me realize is that I could play for a great Division II program and do something really special, while at the Division I level I could play and I might do good things, but we’re lucky if we just make the NCAA tournament and then just playing for a league title and then have to play UConn in the first round and get our butts kicked.

Or, I could play for a school like Bentley, who is like the UConn of Division II and win league championships, regional championships, and ultimately a national championship. Having been around successful teams my whole life and won a lot of championships, even as a little girl playing travel basketball, that was something really important to me to win big titles.

Looking back at it now, Bentley was my first choice and there really wasn’t a close second because I just thought it was the perfect fit for me in every way.

When you reflect back on your Bentley career, was that what you had envisioned when you signed up to play four years ago?

There was never a thought in my head that I’m going to be an All-American, I’m going to be the leading scorer or Player of the Year or anything like that. I think that I’m pretty realistic in my ability as a basketball player and I was just hoping to contribute a little bit and play for a great team. I was really fortunate that the coaches saw a lot of promise in me from the second that I got here and let me play a huge role as a freshman and then continue on for three more years.

I always say that as long as my teams are still playing for championships then any personal accolades will take care of themselves and I just want my teams to win and that’s all I worry about.