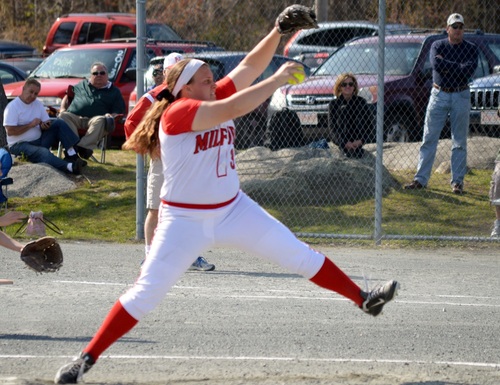 Milford, Mass. – It is becoming almost routine – another game, another opponent, and another no-hitter for Milford senior pitcher Shannon Smith.

The two-time Gatorade Player of the Year tossed a perfect game against Franklin and freshman Jill Powers stole home to provide the lone run as the Hawks pulled out a 1-0 win on Friday afternoon.

Smith was typically dominant. She struck out 14 Panthers, including at least two in every inning but the third. Smith was able to mix in her change-up early in the game and utilized her rise in the later innings to keep Franklin hitters off-balance. Milford head coach Brian Macchi was impressed at his star pitcher’s ability to keep improving.

He noted, “Her arsenal has expanded and we have a lot of pitches that we feel comfortable throwing at any given time and it’s just really helping her keep hitters off-balance and taking control of games.”

Milford had several chances to break the game open against Franklin starter Lily Criscione, but struggled to get clutch hits with runners in scoring position. This was partly due to Criscione’s solid performance and also to tough defense from the Panthers. The Hawks had six hits as a team, but left seven runners on base.

“The last three games that we’ve played here, against Oliver Ames, North [Attleboro], and today against Franklin, the teams are just making great plays,” said Macchi. “I keep telling the girls to not let the frustration creep in. We are putting the pressure on the defense, but they’re making the plays.”

In the bottom of the third, Powers reached on a throwing error by Franklin shortstop Becca Seifert, which moved the freshman into scoring position. After a strikeout and grounder back to Criscione, Powers stood just 60 feet from the plate. With Smith up to bat, the ball got away from Franklin catcher Brie Flaherty, but only by a few feet. Powers did not hesitate and raced home just ahead of the tag.

Macchi commented, “Right before the pitch, I told her to get a couple extra feet off the base. I just felt something could happen with Shannon at the plate and the pitcher trying to be as perfect as possible. Having a freshman make a good read – that’s what we needed.”

Franklin’s defense managed to get it out of jams in the fourth and fifth innings. With the bases loaded in the fourth, Criscione induced a harmless pop-up to right and then Seifert made a solid running grab on a liner over third base. In the fifth, with runners at first and second and no outs, third baseman Julia Malloy snagged a grounder and turned a 5-3 double play that ended the threat.

Although the intensity of the game dropped considerably after Milford took the lead, Franklin head coach Kate Fallon was proud of her team’s effort and pleased with where the Panthers stand at the midway point of the season.

“We’re young and scrappy,” she explained. “We play great against great teams. We rise to the occasion. When we play good defense, we’re a tough team to beat.”

Milford will give Smith a scheduled day off on Monday when it faces Canton and start freshman Julia Levine. Franklin will try to get back on track at home against Attleboro.