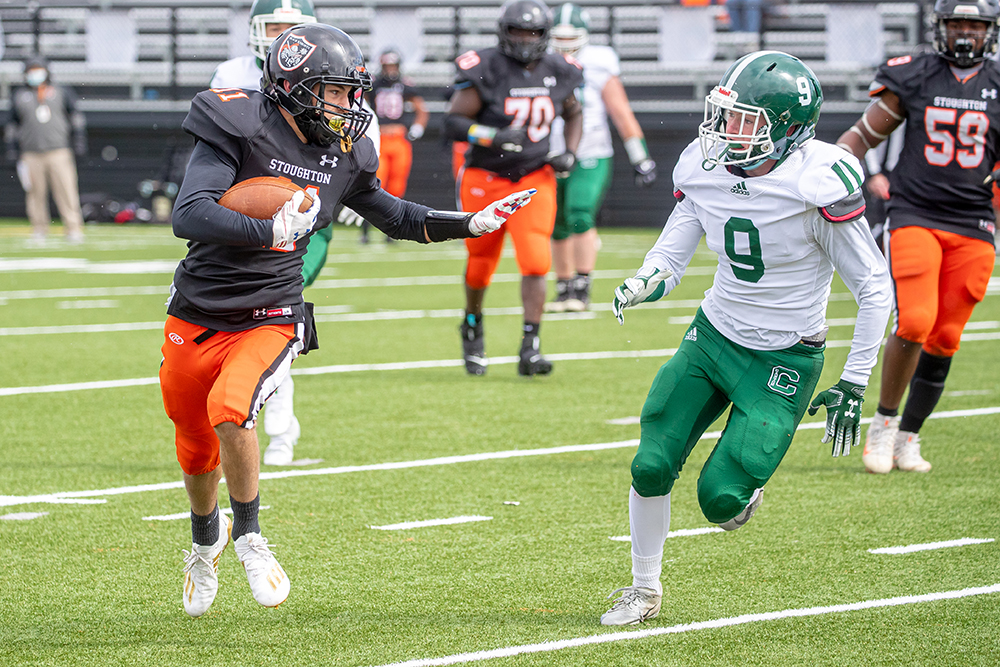 STOUGHTON, Mass. – With small snowflakes swirling in the wind, the temperature hovering in the mid-30’s, and Canton Bulldogs and Stoughton facing off on the gridiron on a Thursday morning, it sure felt like Thanksgiving.

The holiday rivalry continued between the Bulldogs and the Black Knights, only this time it was on Earth Day and in the middle of April vacation for the final game of the Fall II season due to COVID-19.

It marked Stoughton’s first home game for the holiday meeting since 2016 and the Black Knights celebrated in grand style. The hosts put a bow on an impressive season with a 41-7 win at the new Veteran’s Memorial Stadium on the campus of Stoughton High.

Stoughton wasted little time to take the lead and found the end zone early and often. In fact, the Black Knights made four trips to the end zone — all in the first quarter — within its first 14 plays on offense. Three of the four drives started in Canton territory and the other just one yard into their own half.

“That was a good start,” said Stoughton head coach Greg Burke. “We’ve played hard the last three weeks, we’ve hung in and had some guys down. Every game has been tough. We might not be the most talented, but we work hard and the kids play tough.

“It’s been a tough year for Canton a little bit, they have some good kids over there. But they weren’t able to do much against our defense. I’m so happy for the seniors, it’s a great way to finish it up. It’s a weird time, been a weird year but overall I think we had a pretty good year, I’m very happy. I’m going to miss these guys.”

The Black Knights also put on a shutdown performance on the defensive side of the ball, shutting out the Bulldogs until the final play from scrimmage when senior Jack Albert, who was selected to wear #27 in honor of former Canton star Ricky Shannon, bullied his way in for a 1-yard touchdown.

Senior Jake Queeney set the tone right away for the hosts with a 58-yard return on the kickoff, only denied a touchdown on a tackle from kicker Will Keefe. From there, Stoughton needed just five plays as senior quarterback Brady Conlin dropped a pass to Christian Ais for a 12-yard score. Jonah Ly’s first of five successful point after attempts put Stoughton ahead 7-0.

The Black Knights got the ball back after a punt at their own 49-yard line. Four plays in, facing 3rd and 9, Conlin dropped back and dumped a screen pass off to junior Emmett Pearl, who got to the sideline and turned on the jets, racing the rest of the way for a 40-yard score with 4:07 left in the first.

Ais had a big return on Canton’s next punt and on the first play of the ensuing drive, Stoughton was back in the end zone again. Senior John Burke took over under center and kept it himself, first racing to the left before cutting back through a big gap and going in for a 19-yard touchdown and a 21-0 lead with 2:30 left in the first quarter.

It continued to go Stoughton’s way as the Bulldogs coughed up the football on the kickoff with Ly coming up with the loose ball. After a 17-year end-around rush from Queeney, Burke handed it off to senior Nivon Domoulin for a 7-yard touchdown and a 28-0 advantage with 0:48 left in the opening quarter.

Domoulin was starting in place of star senior running back Christopher Ais, who missed the game after being poked in the eye the week before. For Stoughton, it was another player on a long list of starters that missed time this season.

“The kids that stepped up for us were great,” Burke said. “We had seniors that came in and got to play and it just shows how they are tough kids. Nivouin was the one today [for Christopher Ais]. We just got Christian Georges back, who at full throttle he’s the best player in the league. But that’s the way it is, that’s high school football. You’re only as good as your backup. These days, you have to practice them almost harder than your starters because, at any time, they’ll be in.”

Canton’s final drive of the first half was its best of the first two quarters, marching 34 yards into Stoughton territory on seven plays but the Black Knights stuffed the Bulldogs on 4th and 2 to end the half with a 28-0 lead.

It was more of the same on the offensive side of the ball for Stoughton in the second half. The Black Knights used eight plays to cover 64 yards, highlighted by a 33-yard pass from Burke to Ais. Christian Georges, back from injury, capped the drive with a 2-yard plunge and a 35-0 advantage.

Stoughton forced a turnover on downs and its offense went to work, needing just three plays to find the end zone. After Ais went for 25-yards, Domoulin found the end zone for the second time in the game with an 8-yard rush.

“I’m really happy with the year,” Burke said. “[John] Burke had a busted finger from last week so Conlin came in, another great senior, and threw two touchdowns. We got Colby [Andrews] in there as well, he’s another senior. You try to play everyone when you can, it’s not easy but they are great kids. I’ll take these kids over anyone. We don’t have any problems, they play together as one and we’re very proud of that.”

Canton took advantage of a Stoughton fumble late in the fourth quarter to get on the board with junior Andrew Butler coming up with the fumble recovery. Butler got the drive going with an 11-yard carry and two plays later, Albert burst up the middle for a score from a yard out.

Stoughton football finishes the season at 5-2 while Canton wraps up the Fall II campaign at 2-5.