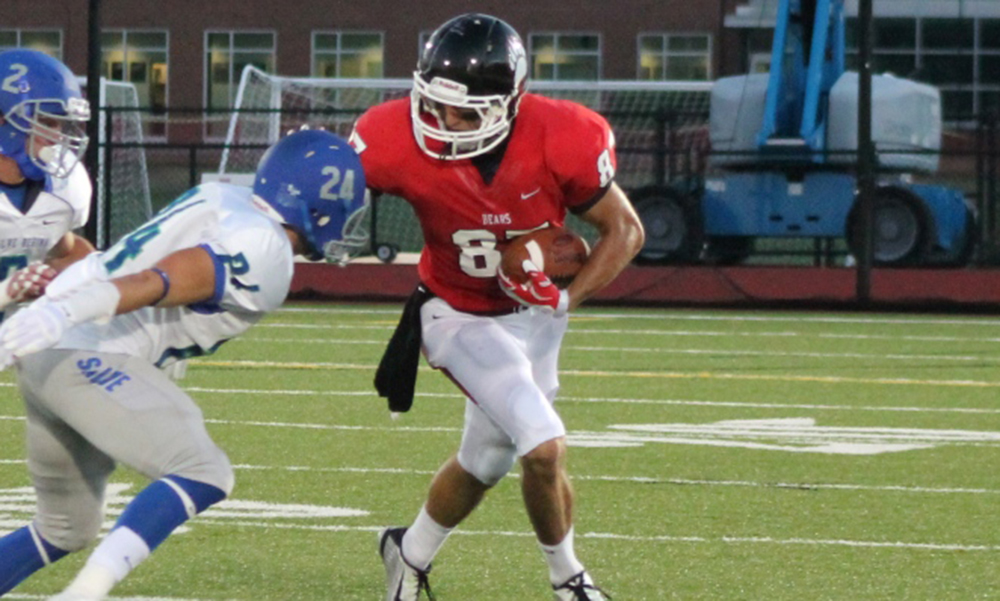 Bridgewater State started off their league schedule with a big Worcester State and there were Hockomock ties all over the field. In the Bears’ 34-28 win, King Philip alum Michael Viola hauled in three passes for 104 yards and a pair of touchdowns and OA grad Carlton Williamson had nine carries for 48 yards and three catches for 61 yards for a team-high 125 all purpose yards. Defensively, Cameron Williamson was third on the team with seven tackles, three of which were for a loss, and also forced a fumble. Stoughton grad Manny Chery and KP’s Christian Flaherty each had a tackle for BSU and OA’s Nick Cidado had six punts for 213 yards (35.5 average) and locked the Lancers inside the 20 once. For Worcester State, Mansfield’s Dylan Finerty finished with eight tackles (second on the team), Milford’s Eric Nunez had three tackles, including one for loss and Sharon’s Adrian Lingo had a 35-yard field goal, an extra point and a pair of tackles.
Former Oliver Ames standout St. Clair Ryan had his best game of the season for Anna Maria. In a 23-16 setback to Curry, Ryan had 33 yards on the ground on 10 carries and also had a 10 yard kickoff return. In the win, King Philip alum Christian Vellante had three tackles.
Former North Attleboro star Paul Norris had a big game for Bentley over the weekend. Norris, a captain for the Falcons, had five tackles including an 11-yard sack. Norris forced a fumble and also had a fumble recovery. Attleboro’s Chris Walsh had four receptions for 20 yards and also got a pair of rushes.
Brown opened up its season with a 20-16 setback to Bryant over the weekend but a former Hockomock League All Star still made an impact. North Attleboro’s Alex Jette hauled in a team-high seven receptions for 84 yards, including a 23 yard reception. Jette also had a rush for 10 yards.
Salve Regina picked up a 32-14 home win over Castleton over the weekend and there were former Hockomock players on both sides. For Salve, Franklin’s Dan McDermott picked up a tackle and also had a rush. Franklin’s Robert Dellorco also saw time in the game for Salve. For Castleton, Mansfield’s George Busharis went 18-29 for a 165 yards and also had a 1-yard touchdown run in the first quarter.
In game that involved over a dozen former Hockomock stars, Attleboro’s Tommy Burns came up with his biggest game yet for Framingham State in the Rams’ 34-21 win over Fitchburg. Burns had two interceptions in the game and also had four tackles. Foxboro’s Derek Gilreath recorded a tackle while King Philip alum Brian Donahue and Stoughton’s Joe Wilder also saw time for the Rams. For Fitchburg, Taunton’s Asante Easter had a pair of tackles, Canton’s Sterlin Garvin notched one tackle while Foxboro alums Gerard Darcy and Ty Spencer both played.
Springfield picked up a dominant road win at Mount Ida on Saturday afternoon. There was plenty of impact on the defensive side of the ball from Hockomock alum with OA’s Colin Lozzi leading the way with four tackles, a sack and a forced fumble. Taunton’s Nick Ruiz had three tackles and a half a sack and Stoughton’s Brandon Alves also had a half a sack. For Mount Ida, Manfield’s James Comer had five tackles and a forced fumble.
Former Hockomock League All Star Brett McEvoy was named to the New England Football Conference Honor Roll. An alum of King Philip, McEvoy led the Bison with 12 tackles (seven solo), including three tackles for loss (TFL) and 1.5 sacks, in a loss on Friday night. McEvoy leads Nichols in both tackles (31) and TFL (6.0) this season.

Former Taunton standout Dan Belair is one of just three players for AIC that has played all 462 minutes this season for the Yellow Jackets. AIC is off to a 3-2 start and Belair is apart of a defense that has picked up two shutouts so far this year.
North Attleboro’s Luke Albertini is just one of six players who has started every single game this year for Central Connecticut State University. Albertini, a sophomore, has patrolled the midfield for the Blue Devils and has a shot on goal this season. Albertini spent the majority of his high school career playing for the New England Revolution Academy.
Adam Borberly has started in all eight of Colby-Sawyer’s games this season and has played 525 minutes, which is third most on the squad. Borberly plays in the midfield as the Chargers have picked up three wins so far this season.
Another former Tiger from Oliver Ames is having yet another stellar season this Fall. David MacKinnon has started in net for all seven of Hartford’s games this season and has picked up 22 saves. He’s notched two shutouts and has allowed 1.17 goals on average.
Freshman Matt Rodrigues is just one of two first year players that has started all six of UMass Dartmouth’s games so far this year. The former Hockomock League All Star at Attleboro has helped the the Corsairs to a 4-1 start this Fall.

Stoughton’s own Mikayla Williams has been one of the mainstays on the field for Coastal Carolina this Fall. Williams has started in six of CCSU’s eight games and has logged 609 minutes, which is second on the team. She’s also netted one of the team’s 13 goals.
Former Taunton standout Victoria Floeck is one of seven players for Fitchburg State that has been in the starting lineup for all six games this season. Floeck also has netted one of the team’s three goals as the Falcon are 2-4 this season.
A pair of former Hockomock All Stars and rivals turned teammates have played big roles in Providence’s 7-3 start. OA graduate Kendall Andrew has started in nine of the Friars’ 10 games and has an assists on the season. Canton’s Hailee Duserick, a freshman with the program, has started in six games and appeared in all 10.
Hailee’s older sister Brianna Duserick has started in all seven of Stonehill’s games so far this year. The Skyhawk are off to a 2-4-1 start and Duserick has seen time in the midfield and in the back. She has one assist this season with two shots on target.
A former Sharon star and former Hockomock League All Star is just one of five players who have made the University of Vermont’s starting line up every game this season. Meg James has started in all eight games for the Catamounts as they are off to a 3-4-1 start. James, who is in her sophomore year, started in all 17 games during her freshman season last year.

Bridgewater State isn’t having the strongest of starts but Mansfield’s Alyssa Kelly has been a bright spot during her freshman year. Kelley has 74 digs so far, which is fourth on the team, in 38 sets played. Kelley has appeared in 11 of the Bears 12 games so far this season.
Former King Philip star Brigid Murray continues to set Westfield State up for success this season. The Owls are 4-6 this season and Murray leads the team with 132 assists. Murray also has six aces and a kill in 29 sets played.
Canton graduate Julia Murphy continues to be a rock for UMass Boston despite the Beacons slow start to the season. Murphy is second on the team in kills with 86 and also has 25 digs. Murphy has reached double-digit kills in each of the last three games for UMass Boston.

Oliver Ames graduate Nick Carter has been one of St. Anselm’s top golfers so far this Fall. In the Queen City Challenge, Carter shot an 80 to place 10th. In the Bowdoin Invitational, Carter carded a 156 over two days to get 17th and at the Dowling Shootout, he shot 157 over two days for 38th overall. He’s the only golfer for the Hawks to place in all three events.