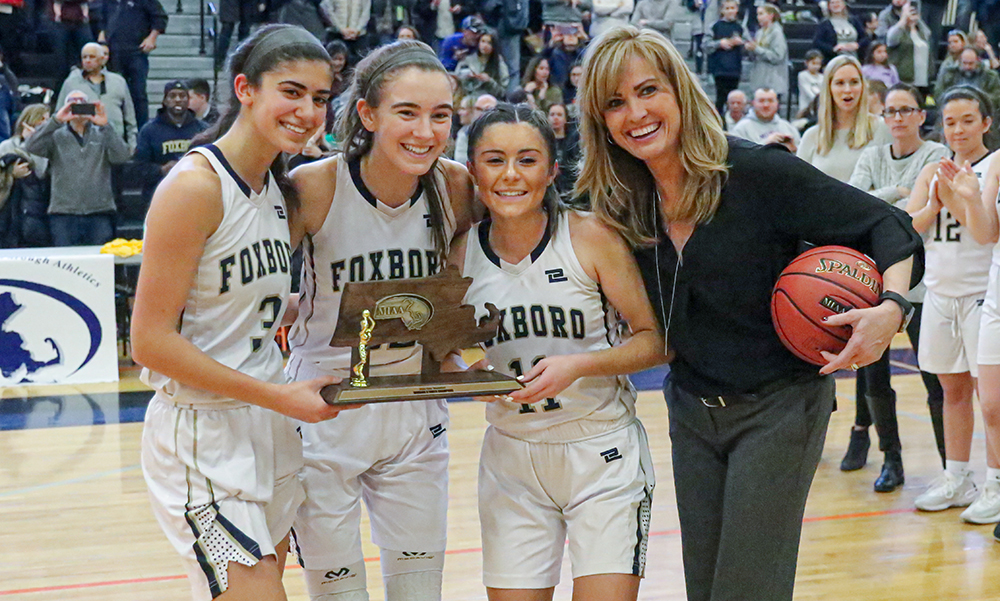 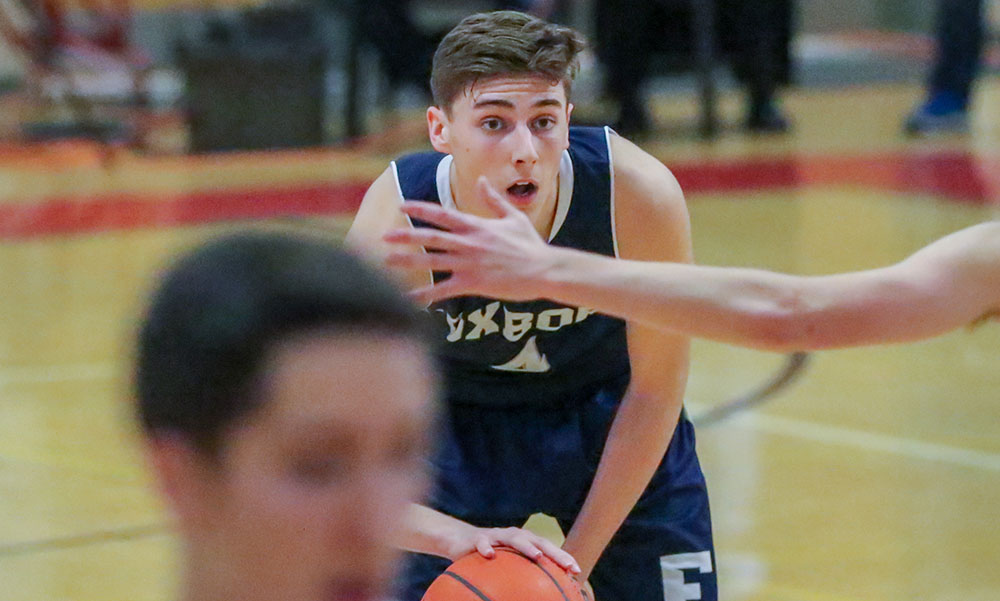 HINGHAM, Mass. – For 32 minutes, the 12th-seeded Foxboro Warriors gave the fifth-seeded Harbormen of Hingham High everything they could handle.

The four minutes of the overtime period, however, was all Hingham.

The Harbormen forced the extra period with a free throw with 1.6 seconds left in regulation and then dominated the extra frame en route to a 76-62 win in the First Round of the Division 2 South Sectional tournament.

Foxboro raced out to a 41-33 lead at halftime but the Harbormen employed a box-and-one defense on Warrior senior star guard Brandon Borde (22 points, nine rebounds) in the second half, a tactic that slowed the Warriors throughout the final 16 minutes of regulation.

By the start of the fourth, Foxboro’s lead shrunk to just two, 45-43, after the Warriors hit just one field goal in the third quarter and scored four points total. The fourth quarter certainly went better and the Warriors went back-and-forth with the hosts.

“They went to the box-and-one [on Borde], we knew it was coming,” said Foxboro head coach Jon Gibbs. “We spent a lot of time on it in practice the last two days, we had a lot of different things ready to go, and for the most part, I thought we did get some good looks but it was just one of those nights where the ball didn’t fall at key times. I thought we executed pretty well, just didn’t make enough of our good looks. And it took us out of our rhythm in terms of running our normal offense.

Hingham sophomore Nick Johannes converted a tough layup off the glass to seize a 54-52 lead with 3:28 to go but two possessions later, Foxboro senior Donald Rogers (12 points, 11 rebounds, seven assists) finished a layup through contact, adding a free throw to put Foxboro ahead 55-54 with 2:19 to play.

Thomas Koenen finished down low for Hingham to take the lead back but a hustle offensive rebound from Foxboro senior Dylan Barreira led to a bucket from classmate Ryan Hughes (nine points, six rebounds) off an inbound pass from Rogers.

Hingham answered again, this time as Luke Mashburn sank a difficult turnaround baseline jumper for a 58-57 lead. With just under a minute to go and the shot clock about to expire, Rogers drove to the basket to draw a pair of defenders, leaving Hughes open for an easy finish and a 59-58 lead with 34 seconds to play.

The Warriors got the stop they needed but couldn’t extend their lead, missing the front end of a one-and-one situation with 10.6 seconds to go. Hingham’s Jack Hurley (career-high 28 points, 13 rebounds) was fouled driving to the basket with 1.6 seconds to go. He missed the first but hit the second to tie and send it to overtime.

“Felt like more [than 13 offensive rebounds],” Gibbs said. “For whatever reason tonight, we just didn’t rebound the ball as well as we needed to. Give credit to Hingham, they attacked the offensive glass with incredible energy. Guards, forwards, everybody on their team seemed to be all over the offensive glass. I thought our guys played hard but those rebounds hurt us. I think especially early on, fouls and rebounds hurt us, they were able to stay within striking distance.”

On the ensuing possession, Hurley deflected a pass free and went in uncontested for a layup and a 63-59 lead, tying Hingham’s largest lead in the same at that point. Another Foxboro miss and Hingham drained a three for a 66-59 lead with 2:32 left.

In all, it was a 13-0 run to start the overtime period before Foxboro got on the board with under a minute to go.

“Once it got it to the overtime, I thought they punched first,” Gibbs said. “We had a couple of good looks that didn’t drop and they knocked down some shots. At that point, with not a lot of time left on the clock, you’re in a tough spot. They stole the momentum early in the overtime and kind of put us back on our heels.”

While Hingham’s defense slowed the Warriors in the second half, the only thing that really held Foxboro back in the first half was fouls (13 team fouls in the first).

Foxboro shot 51.9% from the field over the first 16 minutes, racking up 41 points in the process. The Harbormen had no answer for Borde in the first half as the senior poured in 20 points, including going 4-for-6 from three point range.

Hughes added five points in the first before running in foul trouble in the second, Dylan Barreira converted a traditional three-point play, and Rogers sank a triple to help Foxboro take a 23-14 lead through the first quarter.

Borde added 10 more points in the second quarter as the Harbormen tried to slow Foxboro with a 2-3 zone. Will Morrison (11 points) and Rogers each hit a three and Barreira added two more from the line to help Foxboro take a 41-33 lead into halftime.

The Warriors shot 7-for-14 from three-point range in the first half but only sank one each in the third, fourth, and overtime periods.

Foxboro boys basketball finishes the season at 14-9 with a share of the Davenport division title.

FOXBORO, Mass. – Coming off a difficult opening round game against No. 16 seed Scituate, top seeded Foxboro wanted to send a message right from the start in Saturday afternoon’s Div. 2 South quarterfinal against 2016 sectional runner-up Hingham.

The Warriors came out firing on all cylinders, started 7-for-9 from the field, with six assists on those seven baskets, and scored 21 points in the opening quarter against the Harborwomen, nearly half of what they scored in the entire first round game.

Thanks to the strong start, Foxboro never trailed at any point against Hingham. In fact, the Harborwomen never got closer than nine points (midway through the second quarter) and Foxboro eased into the semifinal with a 62-39 victory.

“That first game jitters,” said Foxboro coach Lisa Downs about the Warriors’ struggles in the tournament opener. “Even though they seem like a confident team, in that we’ve been here, until you step on the court in the state tournament…they freeze up a little bit, the shots get a little bit tighter, but they came right into the game tonight ready to take care of business.”

Senior guard Kristen Bortolotti was injured prior to the beginning of the playoffs and in her absence, junior forward Shannon Smally was given a spot in the starting lineup. She made it count scoring six of her 10 points in the first and providing a spark in the post on both ends of the floor.

“That was huge,” said Downs of Smally’s contribution, “and it’s been right below the surface for the entire season and I’ve been begging her to unleash it and she did tonight. She was just confident out there; she was strong with the ball; she was doing the things that she shows in practice all along. She was huge for us tonight.”

Lily Sykes drilled a pair of threes in the first and Grace Tamulionis knocked down a baseline jumper and a three to help Foxboro extend the lead out to 10 points, 21-11, by the end of the quarter. Defensively, the Warriors also made a switch from their typical man-to-man to a 2-3 zone to try and limit Hingham’s ability to get into the paint.

“I’m mixing it up,” said Downs. “Their game is primarily driving, so we were just trying to take away the middle and force them to shoot from the perimeter. They were starting to hit some and we weren’t boxing out well enough, so I was more comfortable settling back into what we know best, which is man.”

The second quarter was very different for Foxboro, which only scored six points and made two shots from the floor, but the defense, whether in man or zone, clamped down and held Hingham to only one basket and three points. Senior Lauren Flahive was an important cog in that defense with four first half steals, as well as six rebounds and two assists.

“She does so much out there that even someone four inches taller than her couldn’t be doing,” said Downs of Flahive. “She does all those intangible things that, unless you break her game down, you’re not going to recognize she does. She’s so effective at her craft.”

The Warriors led by 13 at the break and never allowed Hingham to get any closer, although there was still some trepidation that the Harborwomen could go on a run.

Ashley Sampson, who was named Hockomock MVP by the league coaches, had picked up a third foul (in what appeared to be a case of mistaken identity) and sat for a few minutes but Downs decided to bring her back with about three minutes left in the third and a 13-point lead.

“She’s smart enough that she’s not going to pick up that next foul,” Downs explained, “and I changed her defensive assignment too to someone who wasn’t as involved in the offense, but I needed her on the court.”

The move paid off. Sampson, who had only scored six points up to that point, buried a step-back three and then drove to the basket to close out the third quarter with Foxboro ahead by 17, 38-21.

In the fourth, Sampson took over. She scored 13 of her game-high 24 points, shooting 9-of-10 from the free throw line, as Hingham tried to extend the game with fouls. Tamulionis also came through in the fourth with five of her 12 points and Riley Collins nailed a corner three to add some separation in the final minute.

Although Hingham was never really that close in the second half, Downs admitted that it was only in the final couple of minutes that she started to feel like the game was in control.

She said, “I think it was only with four or five minutes left in the fourth that I said, okay I can breathe now. They’re a very good team and they came back against Oliver Ames. I never felt real comfortable until about four minutes left.”

As the Warriors move forward in the tournament, they will miss not having Bortolotti in the lineup but Downs is confident that the other players can pick up the slack on both ends of the floor.

“Of course it’s devastating not to have Kristen out there,” she said, “but if we all do just one or two more things that we don’t normally do…everybody pick up the slack a little bit, then everything will take care of itself.”

Foxboro (20-2) will face No. 4 North Attleboro in the Div. 2 South semifinal at Massasoit Community College on Monday night at 5:30. The teams split two meetings in the regular season.

Click here for a photo gallery from Foxboro vs. Hingham girls basketball in Div. 2 South quarterfinal, 3-4-17.