Below are the official 2017 Hockomock League Boys Outdoor Track All Stars, selected by the coaches in the league.

For a history of recent Hockomock League Boys Outdoor Track All Stars, check out our history section. 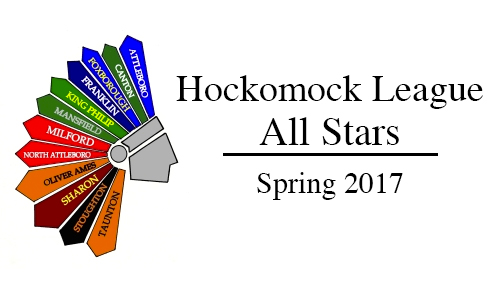 Today’s games are listed below. The list is updated with all changes we have received.

Baseball
Stoughton, 6 @ Canton, 3 – Final – For the second straight game, Stoughton rallied from a deficit and plated the game-winning runs in the seventh innings. Jackson Maffeo’s three-run home run put the Bulldogs ahead 3-0 but Stoughton chipped away, tying the game with two runs in the sixth and went ahead with three runs in the seventh. Ryan Sullivan and Jack Connelly each had a single in the sixth and both came around to score to tie the game. Nick Hardy doubled to lead off the top of the seventh, advanced to third and came home on a double from Sullivan. Luke Johnson followed with a two-run double to put Stoughton up 6-3. Justin Hutchinson earned his seventh win of the seven, tossing three hitless innings with seven strikeouts. Hutchinson struck out the side in the sixth and retired the side in order in the bottom of the seventh.

Foxboro, 1 @ Mansfield, 2 – Final – Mansfield’s Colin Gibbons launched a solo home run in the bottom of the fifth inning to give the Hornets a close win over Foxboro. Mansfield took the lead in the bottom of the second when Anthony DeGiolamo (1-for-2) drove in Cullin Anastsia (2-for-3). Foxboro tied the game in the top of the third when Anthony Mollica knocked in John Cronin. Gibbons finished with two hits in the game. Connor Sheehan earned the win in a complete game effort, allowing just four hits while striking out four.

King Philip, 1 @ Sharon, 3 – Final – Sharon junior Max Tarlin tossed a complete game and the Eagles’ offense did all of its damage early to notch a non-league win over KP. Tarlin allows five hits, five walks, one earned run and struck out seven in a complete game effort to earn the win. After Ben Stamm battled for a single, junior Drew Naisuler (2-for-3, double) launched a two-run home run to put the Eagles head. Aiden Arnold (2-for-2) followed that with a triple and scored on a single from Danny Emerman. SHS head coach Kee Arguimbau said senior Jake Marglous played incredible defense at catcher for the Eagles.

Softball
Canton, 4 @ Stoughton, 13 – Final – Nikki Coppola went 4-for-4 with two triples and four runs scored and Karly Estremera went 4-for-4 with a double, a run scored and two RBI to power the Black Knights offense. Gina Carafa had three hits and three RBI and got the win with six innings of work, striking out nine. Shannon Flaherty also had a pair of hits and drove in two for Stoughton. Canton was led offensively by Molly Loughran, who was 2-for-4 with a pair of doubles.

Franklin, 9 @ Foxboro, 1 – Final – Franklin scored three runs in the third and added three more in the sixth inning to beat Foxboro in a game continued from Sunday (rain). Franklin held a 1-0 lead when the game resumed. Olivia DiGiacomo (four RBI) went 3-for-4 and put an exclamation point on the day with a bases-clearing double in the sixth inning. Kylie Bouzan added two hits and scored a pair for runs for Franklin. Jackie Cherry pitched four innings, retiring the side in order in the first, second and third innings. Emily Valentino pitched the last three innings and recorded three strikeouts. FHS head coach Kate Fallon Comeau said Tara Hartnett played excellent defense at shortstop.

King Philip, 3 @ Milford, 6 – Final – Holding a 3-1 lead heading into the bottom of the sixth, Milford tacked on three runs and then held off King Philip’s late comeback attempt. Shannon Cormier went 2-for-3 with a stolen base, a run scored and an RBI, Kaitlin DeCapua had an RBI single, Maddy Bonvino had two hits, including a double, and a run scored and Emily Piergustavo reached base four times and scored one run. Ali Atherton (three strikeouts) earned the win, escaping a pair of jams in both the sixth and seventh innings. King Philip’s Hailey McCasland, Jenn Hutnyan, Jess Bonner and Nicole Carter each had two hits apiece for the Warriors.

Oliver Ames, 0 @ Walpole, 13 – Final – Lexie Campbell had a pair of hits while Victoria Ziner (double), Caroline Mahoney and Katie Mills had recorded one hit for the Tigers.

Taunton, 24 @ New Bedford, 0 – Final (5 Innings) – Taunton booked its place in the state tournament with a dominating win against the Whalers. Courtney Fisher and Jaylin Couto combined on a one-hitter and struck out 11 batters. Kya Enos went 3-for-3 with four RBI and homer, Rebekah Lajoie went 5-for-5 with five RBI and a homerun and eighth grader Hannah Aldrich drove in four for the Tigers. Katie Van Zandt (three RBI) and Alexa White also hit homers for Taunton.

Boys Lacrosse
Canton, 8 @ Mansfield, 10 – Final – Mansfield goalie Sean Powers turned away 12 shots and Sam O’Connell accounted for four points as the Hornets clipped Canton. Tommy Donnelly and Mike Zampine had strong games on defense in front of Powers. O’Connell scored a hat trick and had one assist while Aidan Sacco scored twice and Cullen Murphy, Hunter Ferreira, Joe Cox and Brad Grant each had a goal and an assist. Danny DeGirolamo also scored once for Mansfield.

Below are the official 2017 Hockomock League Boys Indoor Track All Stars, selected by the coaches in the league.

The Hockomock League Championships were held at the Reggie Lewis Center on Saturday morning. Below are the team results and the top six finishes for each event. Click here for complete results from Athletic.net.