FRANKLIN, Mass. – Franklin head coach John Leighton was not pleased when he called timeout with his team trailing by 10 points in the third quarter of Wednesday night’s Div. 1 Central quarterfinal against Westford Academy. The Grey Ghosts had just knocked down their third triple of the quarter and eighth of the night and Leighton urged his team, which has allowed less than 40 points per game this season, to find another gear on the defensive end.

The Panthers responded and then some. Franklin gave up only 10 more points the rest of the way, turning a 10-point deficit into a 10-point, 63-53 win that sends the Panthers into the quarterfinal. Franklin closed the game on a 30-10 run to earn its first playoff win since the team made a run to the Central final in 2015.

“We really communicated far better on defense, communicated the switches, communicated how we had to rotate far better at the end of the third quarter and especially the fourth quarter,” Leighton explained. :When we were in better position, then we rebounded better, which kept them to a lot of one-and-done’s.”

Out of that third quarter timeout, Franklin went on a 7-0 run that instantly got the hosts back into the game. Olivia Quinn set up Ali Brigham for a basket to get things started and then Quinn added her only basket of the night off a Shannon Gray dish. Westford got two back, but then Brigham snatched one of her 15 rebounds and scored to make it only a three-point game heading to the fourth.

Erin Quaile completed the comeback for the Panthers when she buried a three-pointer from the left wing, her only points of the night, to put Franklin ahead 46-45. It was Franklin’s first lead since the second quarter. Jennifer Martin answered for the Ghosts with a step-back three, her fourth of the night, but momentum was with the Panthers and they answered with a long inbounds pass to Brigham under the basket to tie it.

Brigham, who was recently voted the Hockomock League MVP, was dominant throughout and she grabbed another offensive rebound to put Franklin back in front. She finished with a game-high 33 points.

She also got some help from senior guard Bea Bondhus, who scored seven of her 15 points in the fourth quarter to secure her first win in the playoffs and make sure this was only her final home game, not the final game of her career. Bondhus drained a three on a kick out from Brigham that put the Panthers up 53-51 and then she followed it with a pump-fake and drive to the basket that extended the lead to four.

“In our timeout we were talking about reversing the ball side to side,” Bondhus said. “And so me and Ali were talking and I said, my girl is running in and doubling so look opposite and she said I’ve got you next possession and it happened exactly as we said it would happen.”

Leighton said of Bondhus, who is one of just three seniors on the roster, “Bea’s been a great three-point shooter forever, but she raised her game up. How many times did she ball-fake, drive, and create. She defended, boxed out, rebounded. She’s really expanded her game.”

A pair of free throws by Brigham was followed by a jumper from Megan O’Connell, who had a rough shooting night up until that point, and the Franklin bench and the home crowd sensed that the Panthers were moving on.

“It took a lot of mental toughness there,” Bondhus said. “We wanted to focus on our defense because we gave up five threes in the first half and we wren’t closing out. Once we started getting defensive stops that transitioned into offense for us.”

Three-point shooting had put Franklin in an early hole, as the Grey Ghosts knocked down four from beyond the arc in the first quarter alone. Despite Brigham scoring nine in the first, including a spinning pull-up jumper from the free throw line, and Bondhus adding five, Westford held a 16-14 edge.

The Panthers kept forcing the ball into the paint to Brigham, who added another eight points in the second quarter, but on the defensive side of the ball Franklin was allowing Westford to control the boards and get second chance opportunities. The Ghosts extended the lead to 10 at one point in the second, but a mini-run cut that lead in half by the break. Brigham in the paint and Bondhus from three giving Franklin a quick five points.

The threes kept raining down from the visitors in the third quarter until Leighton’s timeout and his insistence that the Panthers lock down the perimeter.

Bondhus said, “I was really happy we pulled it out. This team means so much and we’re all best friends off the court, so it was so nice to have the team win there… It really shows our toughness.”

Leighton remarked, “It was big to get back to WPI. These kids have never played there. Now they want to get to the final. They’re not done; hungry for more.” 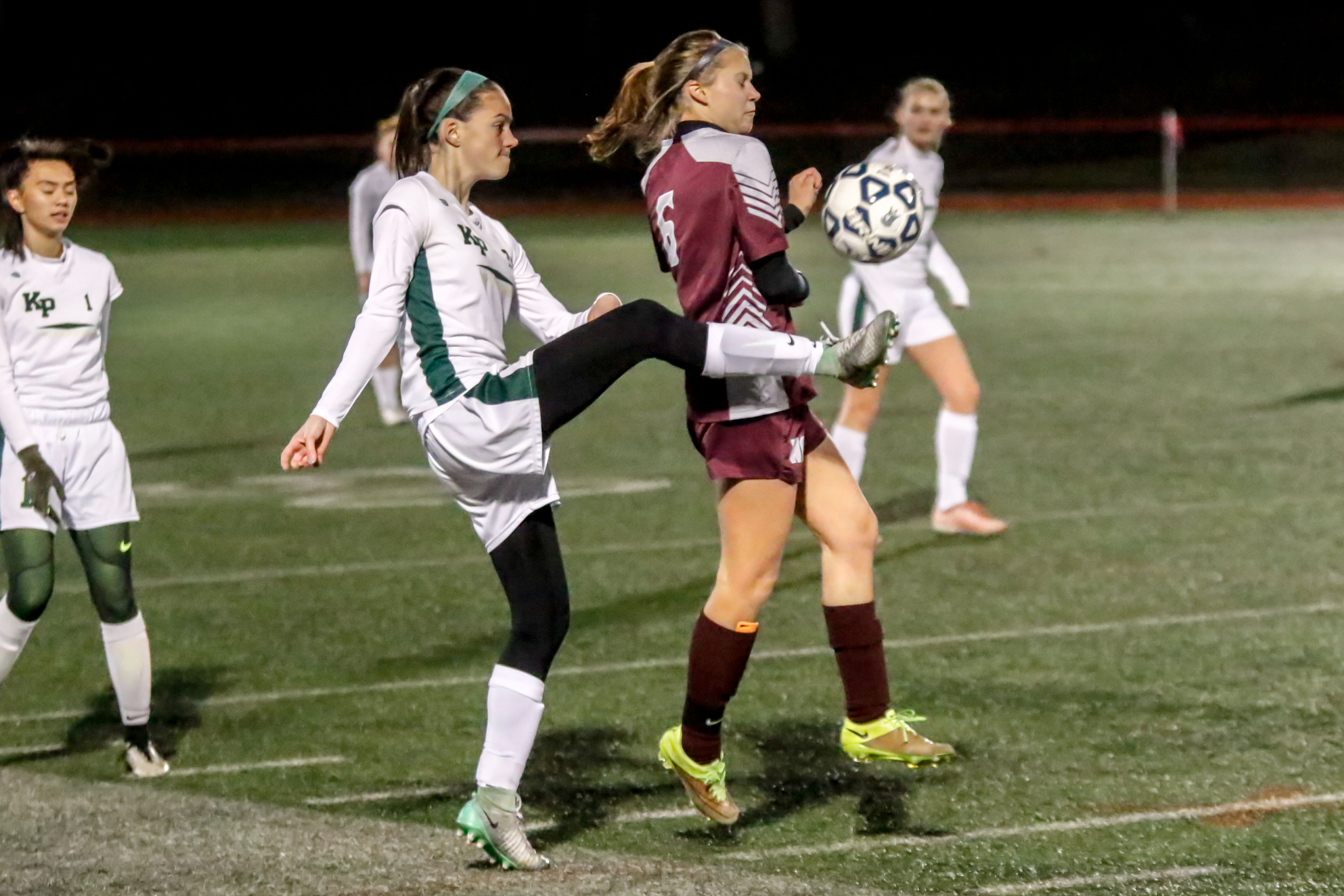 Click here for a photo gallery of the King Philip vs. Westford Academy.