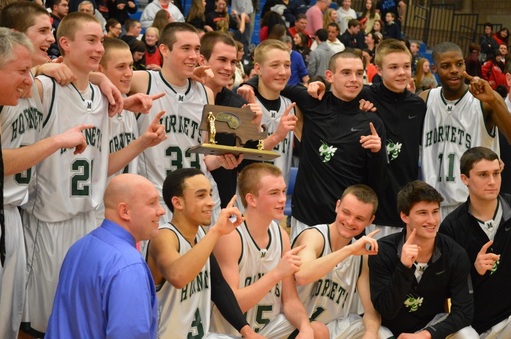 BOSTON, Mass. – Mansfield has found many different ways to win this season, from incredible three point shooting, to league MVP Brendan Hill, or from gritty efforts to grind out wins.

On Saturday night, it was their bench that shined.

The reserves outscored the five starters 34-23 as the Hornets beat North Quincy, 57-45 to be crowned D1 South Champions.

Junior Kyle Wisnieski and sophomore Ryan Boulter each came off the bench to each score a team-high 16 points. Junior Michael Hershman added a field goal to complete the bench’s scoring.

For Wisnieski, coming off the bench is a role he has embraced this season. He has seen his role go from starter to a spark off the bench.

“We took him out of the starting line up to move some match ups,” Mansfield head coach Mike Vaughan said. “Talk about a kid who has excepted his role. He’s the type of kid we have in this program and that’s why we’re here.”

Wisnieski scored half of his points in the third quarter, while Boulter had seven in a row in the fourth quarter. Wisnieski credited his teammates’ recent successes as the reason he found open shots Saturday.

“After shooting the ball so well, Ryan [Boulter] and Greg [Romanko] were getting a lot of attention and obviously Brendan [Hill] draws attention every game we play,” Wisnieski said. “I just happened to get open looks and they were going in for me tonight.”

It wasn’t until the fourth quarter when Boulter scored his seven straight points that Mansfield had some breathing room, and their first double-digit lead. His fifth three of the game gave the Hornets a 48-37 lead. Wisnieski then helped extend that league with a three of his down from straightaway.

“We certainly feed off each other,” Wisnieski said. “Someone will make a big play and that will translate into another big play.”

Mansfield will now play Central Catholic in the D1 State Semifinals on Tuesday at the TD Garden.

“It’s a lot of fun playing with the best teammates in the world,” Wisnieski said. “I love it.”