During his senior season, Devin Foster sat down with head coach Ryan Gordy to discuss his collegiate options. Canton’s all-time leading scorer (1,306 points), the 2019 Hockomock League MVP and HockomockSports.com Player of the Year, and the 2019 Red Auerbach Massachusetts “Mr. Basketball”, Foster had plenty of local options, but he wanted to play at the highest level.

Rather than staying close to home, even if it meant passing up instant playing time or being the star of a team, Foster chose Clemson. He chose the ACC. After two years as a team manager, Foster’s bet on himself has paid off. Last month, he became an official member of the Tigers, wearing the orange No. 14.

“I was kind of hoping for it,” Foster said, “But, you know, coming out of high school, I was from a public school and I kind of wanted to stay home and play it safe [in high school], so I knew for college I wanted to do something a little different. I knew I was going to be willing to be around basketball in whatever capacity that was.”

He continued, “I’m more excited than anything. Last year was just a lot of hours behind the scenes, doing the little things, and now I get to be in the spotlight a little bit more. I’m just looking forward to it.”

Some BIG news for Canton coming out of South Carolina. Former @CHSDogsBball standout Devin Foster is an official member of the Clemson Men’s Basketball Team. Foster lead the Dogs to back to back league titles, scored 1306 points, won league MVP & @mbcaorg State Player of the Year pic.twitter.com/K1blTl7Px0

When Clemson opens the season with an exhibition against Georgia Southwestern State on Nov. 1, it will be Foster’s first chance to run out in front of a packed crowd at Littlejohn Coliseum as a player.

“It will definitely be surreal,” Foster said with a chuckle. “I feel like I’ve got a long way up until that point, I mean we just started full practice. I know how long it’s going to take to get there, so I’m just taking it day-by-day at this point.”

Gordy used the same word to describe his former player on an ACC roster. “When you talk about ACC, it’s pretty surreal,” he said. “That’s as big as it gets.

“I think what I’m proud of is the path that he took to get there. When got there, he put the work in and did everything the right way and won over the coaching staff. To be awarded a spot on that roster is a testament to who he is, the sort of personality that he has, the hard work, and what a great representation for our community in Canton.”

Unlike former King Philip star Jake Layman, who went to Maryland and is now playing in the NBA for the Minnesota Timberwolves, Foster wasn’t a national recruit with a high profile in the ACC. He came to Clemson knowing that he would have to walk-on or be a team manager to be part of the program.

Although his first-semester schedule didn’t allow him to take part in the basketball program, when he returned in January for the second semester he was able to join as a manager. The pandemic made that a short experience, as the campus closed just two months later, but it was a taste of what Foster had missed without basketball in his life.

“I just missed basketball, missed being around the sport and obviously they have a great group of guys,” he said. “I was still working out on my own, maybe not basketball-wise but lifting, just trying to stay in shape, it was just what I was used to, I kind of didn’t know anything else. But once the opportunity opened up to be a part of the program, I kind of hopped right on it and ran with it.” 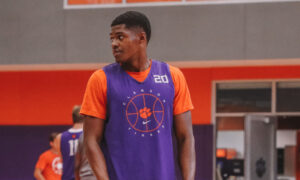 Last year, Foster was a full-time manager. He got to practice a little, running drills at first before moving up to the scout team, running the opponent’s sets. It started with defense, which allowed Foster to get his feet under him and acclimate himself to the coaches’ expectations.

“When I did get the chance to bring the ball up or give them a look on offense, it made it a little easier because I’d been on the court before,” Foster explained. “I felt like I’d shown them what I could do a little bit.”

Being a team manager isn’t a direct route to being a full member of the team. Foster said that wasn’t his goal when he signed on to help the program. He wanted the structure, the friendships that he developed with his new teammates, and gave him that niche that every new college student is looking for. His transition from manager to player will be helped by the relationships he has already built with his teammates.

“When I first joined, they were really welcoming,” he said. They’re a great group of guys. Now that I’m on the team, they’re really excited for me, just giving me support and encouragement. They embraced me for sure.”

There has also been plenty of support from his hometown. Former coaches, teachers, and staff have shared their excitement at the news on social media and it hasn’t gone unnoticed.

“I love the town of Canton,” Foster said. “They’ve always been in my corner supporting me. It’s humbling though because I know the amount of work I put into basketball, the time I’ve spent in the gym. I’m definitely honored and extremely grateful for all the support they’ve given me and the encouragement even when I was a manager.”

Gordy noted, “He embodied what Canton wants to be and he was sort of a poster child for everything that we believe in – having a high character, setting your standards high, overcoming adversity, and being a great teammate. He really is a champion of excellence but not just on the court but in the way that he carries himself.” Gordy also knew exactly when Clemson would be paying a visit to Conte Forum to face Boston College (Feb. 26) and said there should be a cheering section of Foster’s former coaches in attendance.

That game is still a long way away and Foster will have plenty of new experiences over the coming months. There will be running out in front of the home crowd as a player for the first time or the first road trip to experience warming up in front of rabid ACC crowds. Maybe there could even be his first appearance as a Tiger.

“I’m really excited for what’s coming in the next few months,” he said, although he wouldn’t be pulled into discussions of playing time. “I just kind of go out there and give the scholarship guys the best look I can. I realize it’s not about me, it’s about the other guys. I’m not really thinking of myself when I’m out there, I’m thinking about getting those guys better.”

When he left Canton, Foster wanted the chance to prove himself at the top level. He is there now, although he admits it is hard to put it into perspective right now.

“I didn’t know if my career would continue but luckily I got an opportunity and I’m very grateful,” Foster said. “Right now, in the moment, I can’t see the bigger picture yet because I’m in it but it’s definitely surreal and it’s really exciting for me.”